Deepika Padukone Ranveer Singh wedding latest updates: They have also released their first official portraits — one each from their Konkani and Sindhi wedding ceremonies.

The bride, Deepika Padukone (Bhavnani-Singh- ...), walked up to the altar of her mandap to the tunes of traditional south Indian wedding songs like 'Kanya Aagman' which were sung by veteran singer Shubha Mudgal.

According to entertainment portals, during the Sindhi wedding ceremony today, the couple will take part in rituals such as haldi, garo dhaago, baraat, jaimala, palli pallo, hathialo, kanyadaan, phere and saptapadi. We, though, wait for the menu of the lavish Sindhi buffet.

Filmfare editor Jitesh Pillai surely can't wait to join in the wedding revelry. All the little updates from the much-loved couple's wedding festivities in Italy are keeping gossip mills in India buzzing.

While you may have not got CCTV cameras in your society, even after multiple 'resident welfare meetings', Ranveer and Deepika made sure that all the security arrangements were in place in and around Lake Como to ward off gate-crashers and keep the paparazzi at bay (literally!).

While the India-Pakistan cricket matches do little to help calm the tension between the two nation, Ranveer and Deepika's wedding has finally given the warring neighbours a shared reason of joy. #DeepVeerKiShaadi was reportedly trending in Pakistan also on Wednesday. After all, 'love conquers all'.

Exactly five years ago today, Ranveer and Deepika's first film together had released

In what some are calling more than just a coincidence, the couple will on 15 November also celebrate five years of the release of 'Goliyon Ki Rasleela Ram-Leela' — their first project together. Later, the world will know that the blockbuster movie actually formed the starting point of their romance. Intrestingly, the film's director Sanjay Leela Bhansali is often credited for bringing the two stars together and making their jodi a 'hit' by casting them as a couple again in Bajirao Mastani.

Will they live happily ever after? Read Paul the Octopus' prediction to find out:

Paul the Octopus, who found instant fame for his spot-on predictions during the 2010 FIFA World Cup, also sent in his own foretelling of the newlyweds' chances of bliss.

"They'll be very happy," Paul predicted, or something very close to it as far as our correspondent could tell from his garbled octopus-like speech.

While this certainly bodes well for Deepika and Ranveer, reliable sources would have us believe that the octopus we were speaking with was not in fact Paul — said tentacled prophet having passed away most sadly in 2010 itself, at the tender age of two.

A timeline of the filmy love story

Love which blossomed on the sets of Ram-Leela, has culminated into marital bliss after six years of (quite a low-key) courtship. Phew, that was solid guys.

Bollywood (and Deepika's debut) director Farah Khan gifted the young couple a cast of their hands (held together). She had called casting artist Bhavna Jasra at her residence when the couple went to her place to invite her to their wedding.

Deepika and Ranveer are going to have another traditional ceremony today to honour the groom's Singh roots as they will sit down for the Anand Karaj on Thursday morning at the beautiful Lake Como in Italy (of course).

Couple to share wedding pictures with fans at 6 pm today? (Shubh muharat and all)

According to some media reports, the newly-wed couple is going to share the pictures from their nuptials on social media at exactly 6 pm IST. What are we? Excited!

Recap: Couple tied the knot in a 'white and gold' Konkani wedding on Wednesday

Reports indicate that Deepika shunned the rich reds and deep pinks of regular Indian wedding ensembles, and donned a cool cream and gold bridal outfit for the traditional Konkani ceremony in which she tied the knot with Ranveer Singh. Strings of flowers in her hair completed her simple and elegant look. Ranveer's white outfit complemented Deepika's.

The white and gold theme was one replicated by most of the wedding party as well. Guests kept it casual and cool — but nevertheless classy — as they accompanied Deepika and Ranveer around the sprawling lawns of the Lake Como estate where they tied the knot.

From their Anand Karaj ceremony: 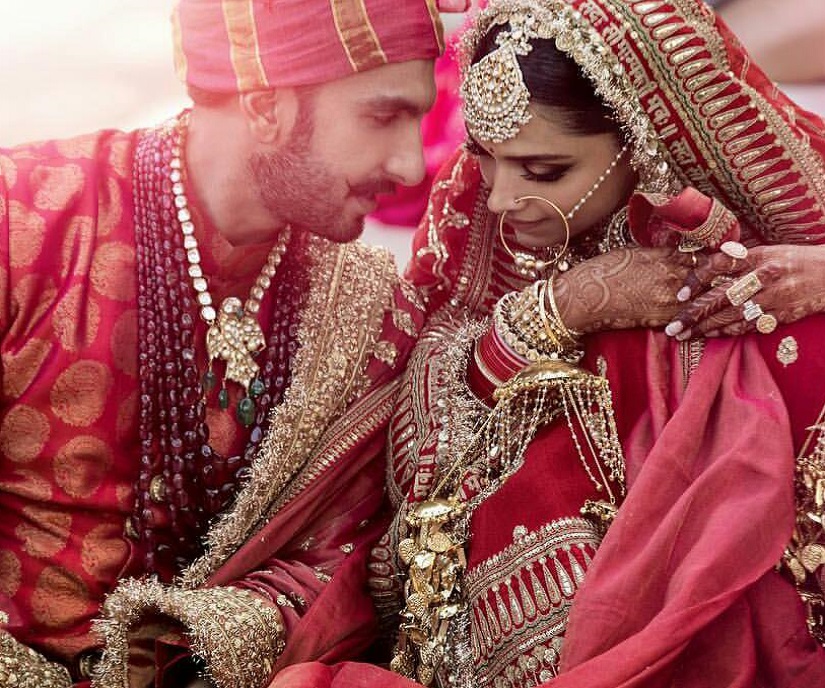 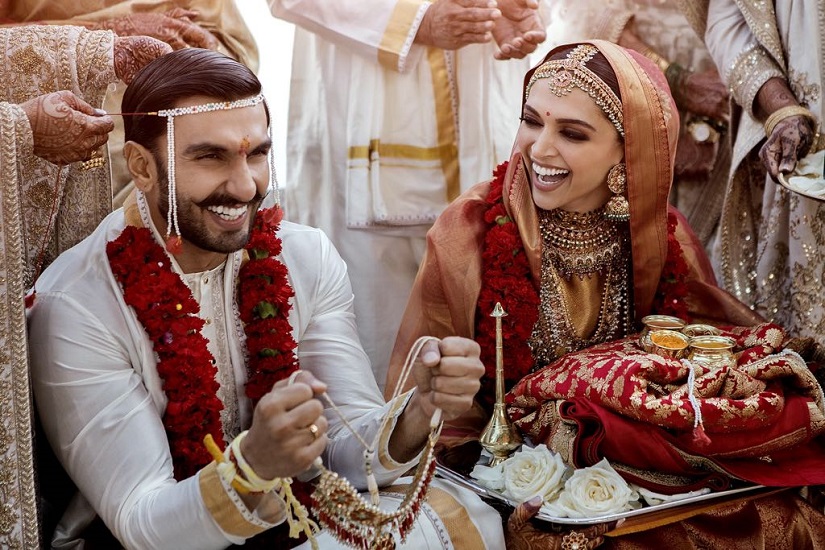 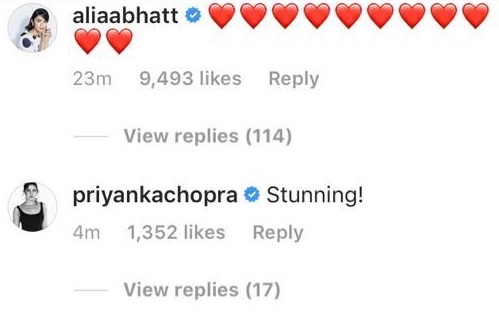 Wishing you both a world of happiness and a beautiful journey together. May the love & respect you have in each other, grow leaps and bounds. And welcome to the club 😁💜👫@RanveerOfficial @deepikapadukone

Congratulatory messages have poured in for the newlyweds on Twitter:

Love and happiness forever.....these are such a full of pyaar wala pictures! For those of us who don’t have a life partner it’s a very “haiiiiiiiii” wala feeling! https://t.co/h1dtYel2be

Shout out to all #DeepikaPadukone fans! We are just minutes away from @deepikapadukone sharing the FIRST PICTURES from #DeepVeerKiShaadi! Stay tuned for the treat. #DeepVeer #ladkiwale pic.twitter.com/PMMBUpBeRO

The wedding party is seen leaving the venue:

Deepika Padukone Ranveer Singh wedding LATEST updates: Deepika Padukone and Ranveer Singh have completed their Anand Karaj marriage ceremony by taking the pheras and exchanging vows. They have also released their first official portraits — one each from their Konkani and Sindhi wedding ceremonies. Wishes poured in from their Bollywood peers in response.

In what some are calling more than just a coincidence, the couple will on 15 November also celebrate five years of the release of Goliyon Ki Rasleela Ram-Leela — their first project together. Later, the world will know that the blockbuster movie actually formed the starting point of their romance. Interestingly, Sanjay Leela Bhansali is often credited for bringing the two stars together and making their jodi a 'hit' by casting them as a couple again in Bajirao-Mastani.

Deepika Padukone and Ranveer Singh will round-off their wedding celebrations today with a traditional Anand Karaj ceremony in Italy's Villa del Balbianello. The couple is expected to wear outfits designed by Sabyasachi for the occasion.

Deepika Padukone on Wednesday tied the knot as per Konkani traditions in a dreamy Lake Como setting in Italy amidst a tight circle of family and friends, culminating a six-year-long love story in a 'happily ever after'. The ceremony began at 8 am on Wednesday, and ended around 1.30 pm as per local time in Italy, those in the know of developments told IANS.

Deepika wore a cream and gold lehenga, and Ranveer was dressed in white, with most guests dressed in pastels, keeping with the subtle and classy vibe of the upscale wedding venue. Northern Italy's Lombardy region, a resort area known for its spectacular scenery, served as the perfect backdrop for Deepika and Ranveer's wedding. While fans and the media yearned for pictures from the wedding celebrations on social media, only a few wide angle shots of the venue gave a hint of the elaborate set-up, decorated with the choicest of flowers. The Konkani style wedding will be followed by a traditional Anand Karaj ceremony on Thursday. Deepika, 32, daughter of badminton ace Prakash Padukone, is likely to wear a Sabyasachi ensemble for the Anand Karaj.

Fondly called as DeepVeer by their fans, the star couple has together worked in films such as 'Goliyon Ki Raasleela Ram-Leela', 'Bajirao Mastani' and 'Padmaavat.'

There were only about 40 guests for the celebrations, but a no-pictures policy imposed on them, left the couple's fans pining to get a glimpse of the gala. Mobile phones were not allowed outside people's rooms, and there were boats patrolling the lake for drones as part of the three-level security plan for the wedding. The two left for the wedding revelry to Italy last week.

Deepika and Ranveer exchanged rings on Monday evening, and a more 'desi' touch to the celebrations came in with the 'mehendi' function on Tuesday afternoon, followed by a music-filled 'sangeet' the same evening.

For the mehendi cremony, Deepika wore a Sabyasachi Mukherjee creation and the couple was colour co-ordinated. Singer Harshdeep Kaur, along with Sanjoy Das, Bobby Pathak and Firoz Khan performed at the ceremony.

Poles apart from each other in personality, Deepika and Ranveer's love story began on the sets of filmmaker Sanjay Leela Bhansali's '...Ram-Leela". Their off-screen camaraderie gave enough hints to their fans, the media and the film fraternity that love was brewing. But they never confirmed their relationship until recently. They put to rest months of speculation about their nuptials with a social media announcement in October of their wedding dates. "We thank you for all the love you have showered upon us over the years and seek your blessings as we embark on this incredible journey of love, loyalty friendship and togetherness," they said in the announcement.

Over the years, Deepika has been a bit more reserved than Ranveer in expressing her love openly, but the "Band Baaja Baaraat" actor has been uninhibited. While they spoke a bit about their likes and dislikes about each other at a summit in the capital in October, it is only on "Koffee With Karan" that Deepika was a little more open about her relationship with Ranveer.

After their very private wedding ceremonies, the couple will have a reception each in Bengaluru and Mumbai on 21 and 28 November, respectively. They have urged their guests to direct gifts in the form of a donation to Deepika's The Live Love Laugh Foundation, which works towards spreading awareness on mental health.