TV and film actor Taye Diggs returned to host the 25th annual Critics Choice Awards. Winners were from projects released theatrically as well as on OTT platforms. These included Once Upon a Time in Hollywood, The Irishman, Marriage Story, 1917, Watchmen and Succession.

Eddie Murphy was honoured with a lifetime achievement award, while Kristen Bell accepted the #SeeHer award for "push boundaries on changing stereotypes and acknowledge the importance of authentic portrayals of women across the entertainment landscape," according to The Hollywood Reporter.

In her speech, the actress, who has voiced Anna in Frozen and Frozen 2 said, "My immediate reaction is always to answer with words like 'strong' and 'brave' and 'powerful,' but if I'm being honest, to me, being a woman is not about being brave or being strong or being powerful. It's not about being anything specific. It's just about giving yourself permission to be the things that you already are, which seems very easy, but it is not. Because women have been conditioned to fit into boxes; usually tiny, pretty, sparkly boxes with bows on the them."

There was a tie between Sam Mendes (1917) and Bong Joon-Ho (Parasite) for Best Director. Joaquin Phoenix won Best Actor (Joker) and Renee Zellweger was announced as Best Actress (Judy). In the TV category, the winners were Regina King (Watchmen), Bill Hader (Barry), Jharrel Jerome (When They See Us) and Michelle Williams (Fosse/Verdon).

Best Picture - Once Upon a Time in Hollywood

Best Supporting Actor - Brad Pitt (Once Upon a Time in Hollywood)

Best Original Screenplay - Quentin Tarantino (Once Upon a Time in Hollywood)

Best Comedy - Dolemite is My Name

Best Sci-Fi or Horror Movie - Us

Best Limited Series - When They See Us

Best Comedy Special - Live in Front of a Studio Audience: Norman Lear's All in the Family and The Jeffersons 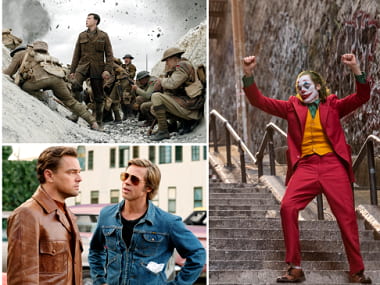 Oscars 2020: Which men were nominated for Best Director, and which women were left out? Oscars 2020 all you need to know: Where and when to watch, nominees, peformances