Bigg Boss 13: Salman Khan gets involved in argument with photographer, says 'ban me if you have an issue'

Salman Khan has been the host of popular reality show Bigg Boss for quite some time now. During the launch event of the new season, Salman reportedly got into a verbal brawl with one of the photographers. Bigg Boss 13 sets witnessed the showdown between the actor and photographer. The video was later shared on social media.

In the clip, Salman can be heard saying, “If you have a problem with me, ban me.”

As per reports in Hindustan Times, the issue happened when the man in question tried blocking Salman's way while the actor was getting up on stage. This made the actor quite miffed and he called out the photographer for always being a nuisance. Later in the clip, the actor is also heard requesting other journalists to take note of the incident and do something about the photographer.

Check out the video

Khan was joined on stage by stars like Ameesha Patel, Arjun Bijlani and Puja Banerjee. After performing on dance numbers, they teased audience members with titbits on the upcoming season of Bigg Boss.

During the event, Salman even opened up about the change in Bigg Boss set location from Lonavala to Film City in Mumbai. Salman said, “While Lonavala and Khandala received a lot of tourism and employment because of Bigg Boss, it was a challenge to handle the huge team. At Filmcity, getting resources will become easier and there is cost-cutting too. It is also easy for the stars to travel when they come for promotion. But the road has heavy traffic in the evening so it will get difficult.”

Speaking about the format of the upcoming show, Salman said that it would span for the usual three months, but the last four weeks would be a complete surprise for viewers. Bigg Boss 13 premieres on 29 September. 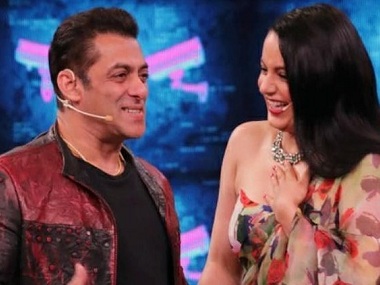