After her blockbuster film Bhaagamathie (2018), Anushka Shetty took a break to get back into shape. Earlier, Anushka gained weight for her role in Size Zero (2015) in which she played an obese girl.

Anushka is now on a signing spree. The Baahubali actress’ next immediate film is a multi-lingual silent thriller with Madhavan. To be directed by Hemant Madhukar, Kona Venkat and Gopi Mohan have penned the story and screenplay of the yet-untitled film. Popular Telugu and Tamil actresses Anjali, Shalini Pandey and supporting actor Subharaju have also been roped in to play pivotal characters in the film. In an official statement, the film’s producers— Cosmos Entertainments and Kiran Studios have confirmed that Bob Brown of The Predators is supervising the action scenes in the yet-untitled film and Yana Rusonova of Prism fame is on board as the production designer while Gopi Sunder, the man behind the songs and background score of Geetha Govindam and Bangalore Days will compose the music. The producers say that they are planning to release the film in more than 1500 theaters across the globe through People Media Factory. As the genre of the film is a silent thriller, the makers believe that it will attract audiences across the globe so they are targeting such a massive screen count.

On roping in Anushka, Hemant Madhukar said: “As we all know, Anushka is a fabulous actress that she can adapt herself to any character. Our team feels other than Anushka, no one can play the character sketched for her”.

Meanwhile, according to some sources, Anushka Shetty has been approached to play the lead role in a mythological film on Lord Ayyappa. Written by Prashanth, Gokulam Gopalan’s Sree Gokulam Films has agreed to produce the film and ace cinematographer Santosh Sivan will don the director’s hat.

When Firstpost asked Santosh Sivan, the National Award winning cinematographer told us that the project is in pre-production stage and as of now, they haven’t confirmed the cast and crew. Sivan also told us that the project will go on floors only he completes shooting for Superstar Rajinikanth’s new film with director AR Murugadoss. The cinematographer has recently finished shooting for his directorial film Jack and Jill (Malayalam) featuring Manju Warrier and Kalidas Jayaram in the lead roles.

However, the film’s producer Gokulam Gopalan confirmed in an interview that his team is planning to rope in Anushka Shetty to play the lead role and AR Rahman is likely to compose music for the multilingual. Sources close to the team tell us that the shoot of Santosh’s film on Lord Ayyappa will begin in 2020.

As Baahubali fetched national wide publicity for Anushka Shetty, south producers are now promoting her movies as multilinguals. These producers also believe that they can make money out of the dubbing and satellite rights in other regional languages and Hindi. Not only Anushka, Prabhas’ upcoming films including Saaho and his new period romantic drama are also being marketed as multilinguals to attract Hindi buyers. 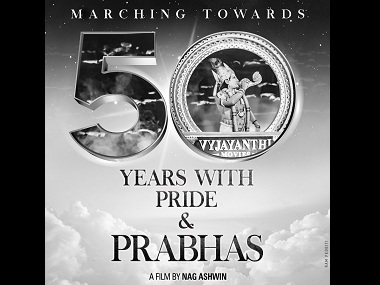