Bhaagamathie movie review: Anushka Shetty shines in this horror-thriller that owes a lot to its technicians

Anushka Shetty-starrer Bhaagamathie is the latest addition in the warehouse of Telugu films that feature a dilapidated house, a young woman haunted by a ghost, jump scare moments, a gut-wrenching backstory, and finally a message about the evil men lurking in the society. But it’s also a film that finds an interesting way to address socio-political issues within the realms of horror-thriller genre and goes into a zone which other films hardly explore.

Directed by G Ashok, Bhaagamathie rises above the cliches of the genre where the focus is more on the story than the scary moments. The ghost here is more figurative in nature since it’s used as a smokescreen to pull the rug beneath our feet. That’s precisely why Bhaagamathie works to a great extent and it all falls into place after dilly-dallying for a while.

The film follows the life of Chenchala (Anushka), an IAS officer, who is sent to prison after she kills a social activist (Unni Mukundan). When a CBI officer (played by Asha Sharath) is sent to investigate Chenchala to find out more details about Eshwar Prasad (Jayaram), a central minister, things go completely haywire in a dilapidated bungalow that was once the house of Bhaagamathie. The rest of the story is about how Chenchala manages to escape from the fury of Bhaagamathie and how that effects everyone else. G Ashok spends plenty of time in building a convincing case which makes us empathise with the lead character played by Anushka. She’s an upright IAS officer who wants to do good for the society and she’s also quite sincere towards her job. When she’s grilled by CBI, who wants to use her as a bait to nail Eshwar Prasad, Chenchala doesn’t break down so easily; however, once it goes dark, there’s a sense of eeriness to the whole proceedings. And understandably, we are made to believe that her life is in grave danger. And just when we think we know how it’s going to end, Ashok shifts gears to add a new twist to the story that makes us want to rethink about everything we are made to believe in the first place. It’s a risky manoeuvre because a dramatic twist like this, in most cases, would feel like we were taken for a ride, but then, in Bhaagamathie, the twist adds a new dimension to the whole story.

More than the story, it’s the narration and how well it’s staged that make a huge impression in the film. The film owes a lot to the production designer Ravinder and music director Thaman, who treat the canvas of the film like a playground. Bhaagamathie is an atmospheric thriller that relies heavily on the setting to create a sense of dreariness. Naturally, the scenes shot inside the house, that's filled with cobwebs, broken windows, and archaic props & paintings, feel extremely claustrophobic and on top of it, there’s Anushka herself who’s struggling for her survival.

Kudos to both Ravinder and Thaman whose contribution to the film is impossible to overlook. Cinematographer Madhie takes us through the topography of the house which enhances the bleak mood that the film relies on. The film owes a lot to the stellar work of all its technicians and some solid writing by Ashok, as much as it does the screen presence of Anushka.

There’s something about Anushka that grips our attention right till the end. Maybe it’s the backstory of her character, where we are told that she’s a no-nonsense IAS officer who’s kind and also earnest. Or maybe, that’s how we have learnt to treat and look up to Anushka over the years. Anushka brings plenty of gravitas to her performance, so much that sometimes it’s her mere presence that keeps the film together when it almost runs out of juice. Jayaram and Asha Sharath too deliver credible performances, along with Murali Sharma and Unni Mukundan, who shine in their respective roles.

At some level, Bhaagamathie feels like a spiritual successor to Drishyam in terms of how convincingly it narrates a simple story and creates a mood that demands our attention.

It also pays a homage to Bryan Singer’s Usual Suspects, which might have been a coincidence but the deja vu is too strong to shake it off. Whatever might be the case, full credit to Ashok for connecting the dots to construct a narrative that sounds quite plausible.

Does Bhaagamathie have something new to say? Not really. But it takes the existing tropes of horror-thriller genre to tell a familiar story in a different manner. It’s layered narrative gives plenty of scope to juggle between different sub-plots and motivations of characters. That’s the real triumph of Bhaagamathie. Ashok might have taken plenty of cinematic liberties to tell his story, but isn’t that what taking a leap of faith all about?

Bhaagamathie is an impressive outing for the whole cast and crew, and it’s also a reminder for us that there are plenty of ways to narrate a story despite having a dilapidated house, a ghost, a hapless young woman, and a gut-wrenching backstory. A big thumbs up for the film. 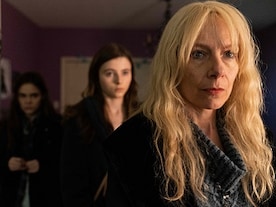