Actor Harshvardhan Kapoor has started filming the biopic on Olympic gold medallist Abhinav Bindra, veteran actor Anil Kapoor announced on Sunday. The shooting of the film, which sees Harshvardhan as the ace shooter, has begun after a delay of nearly three years.

Anil, who would be seen playing the role of Abhinav's father in the film, took to social media to make the announcement. The real life father-son duo will be sharing screen space for the first time. The movie is being adapted from Bindra's autobiography -- 'A Shot at History: My Obsessive Journey to Olympic Gold and Beyond'.

"The Beginning," Anil wrote alongside a picture with him, Harshvardhan and Abhinav.

Harshvardhan penned a long note to announce the upcoming project. He reveals that Heeraz Marfatia will be directing the project, and they are hoping for a release in 2021.

The Abhinav Bindra Biopic which I agreed to do in October 2016 will start filming at the end of this year ... very excited to have Heeraz marfatia onboard to direct @saiwyn to write and @anilskapoor to co star in my dream project .. sometimes films take time especially if you want to make them a certain way , I have always been clear about the films I want to do and this is no different , With mirzya we tried to do something new with the romantic musical with Bhavesh we broke new ground with the idea of what a superhero vigilante would be like in the real world and now this will be a biopic that’s different from the rest and that’s because @abhinav_bindra is a unique and exceptional man with an incredible story that almost no one knows and we will tell it without compromises the way it deserves to be told .. this will be my next film for the big screen #2021 A post shared by Harsh Varrdhan Kapoor (@harshvarrdhankapoor) on Feb 16, 2020 at 4:30am PST

In September 2017, Harshvardhan Kapoor announced on Instagram that he was thrilled to be part of the biopic.

"Beginnings are very special. Especially when you get to play a character that has made the nation proud on the world stage. I am stoked to have been chosen to play Abhinav Bindra and hopefully will do justice to the man, the legend! Like the man himself said, 'Hard Work is a talent'," the actor had captioned his picture with Bindra.

According to NDTV, Abhinav has won gold medal in rifle shooting at the 2008 Beijing Olympic Games. He also won gold at the 2006 ISSF World Shooting Championships. Ace shooter Abhinav Bindra is the first and only Indian shooter to hold both the titles. 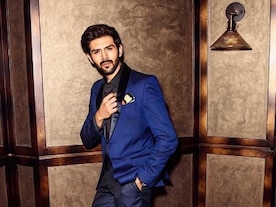