As Mani Ratnam’s dream project Ponniyin Selvan 1 or PS 1 has already hit the screen and has been drawing quite a crowd to the theatres, fans have gone into a frenzy over the magnum opus and further seem to have been loving the leading roles in the film. Featuring actors like Vikram, Aishwarya Rai Bachchan, Jayam Ravi, Karthi, Trisha, Aishwarya Lekshmi, Sobhita Dhulipala, Prabhu, R Sarathkumar, and Vikram Prabhu in significant roles, PS 1 has been one of the most anticipated films of this year.

Aishwarya Rai Bachchan who plays the role of Nandini in the period drama film has also received huge appreciation for her performance. Coming out in her support and to congratulate the entire team, Aishwarya’s husband and Bollywood actor Abhishek Bachchan also shared a poster of the film and further extended his best wishes. However, his now-deleted tweet has already gone viral for all the wrong reasons.

In a tweet earlier shared by Abhishek Bachchan, he shared a morphed image which seemed like a fan-made poster of the film on his Twitter handle and further congratulated the team on the day of release. Not just that, the actor also misspelled the name of his wife in the hashtags inside the tweet. 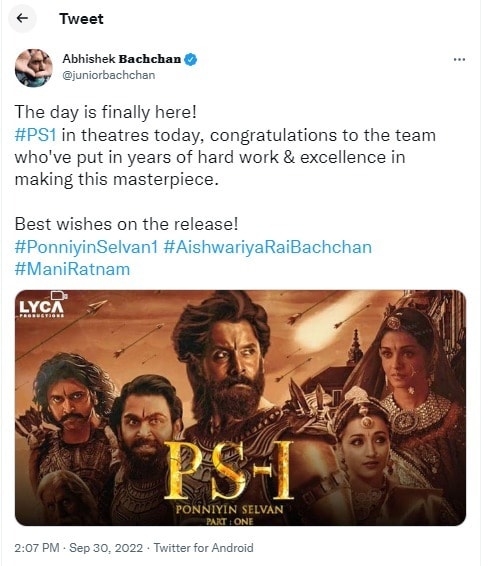 While the tweet has now been deleted and replaced by another one, which is the original poster of the film, the name of Aishwarya continues to remain misspelled in his current post as well. The caption read, “The day is finally here! PS 1 in theatres today, congratulations to the team who’ve put in years of hard work & excellence in making this masterpiece. Best wishes on the release! #PonniyinSelvan1 #AishwariyaRaiBachchan #ManiRatnam”

The day is finally here!#PS1 in theatres today, congratulations to the team who’ve put in years of hard work & excellence in making this masterpiece.

In the meantime, his tweet has so far received several likes and many users also took to the comment section to applaud the film and Aishwarya’s performance.

Speaking about the film, a period drama film directed by Mani Ratnam, the first part of Ponniyin Selvan is a fictionalised story based on the early days of Rajaraja I, the Chola emperor.