The hero of Aavasavyuham: The Arbit Documentation of an Amphibian Hunt shares a name with a species of frog that plays a crucial part in the story. This is no fairytale about a princess kissing a frog and turning him into a prince though. Quite the opposite. It is also far from being an academic treatise although that’s what that mouthful of a title might suggest.

Aavasavyuham is wacky, wacko in the nicest way possible and wild. Linguists and critics might have to put their heads together to envision a new genre into which they can fit this film by writer-director-producer Krishand, since it is, as of now, indefinable and unslottable.

In an expanding industrial area in Ernakulam district, commerce is callously bulldozing the delicate ecological balance when Aavasavyuham zeroes in on its central figure. This giant of a man called Joy (Rahul Rajagopal) appears from nowhere. As one significant character points out, he has no passport, no Aadhar card, no government-issued ID. Without saying it in black and white, the film effectively reminds us here that we’re living in a time when select identification documents have become the determinants of whether a human being can be considered trustworthy or can be deemed to exist at all. 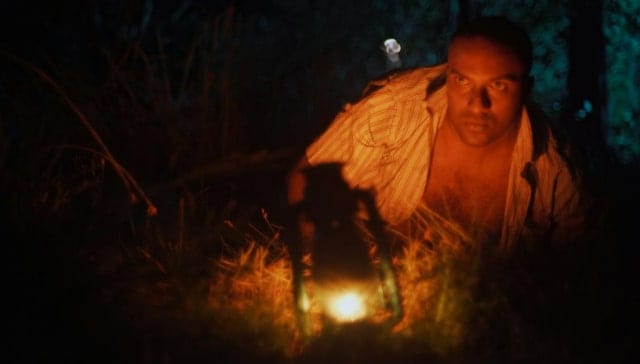 The absence of all-important papers is not the only reason why Joy comes to be considered an enigma. He has a special connect with nature. Other living creatures respond to him in ways that leave the people around him bewildered. He also possesses enormous strength that he employs at one point to prevent two wealthy local goons from intimidating and striking Lissy (Nileen Sandra), a woman who has rejected the romantic overtures of one of them.

A combination of their festering egos, the proprietorial attitude to women that is intrinsic to patriarchy, the human tendency to be suspicious of those who are different, resentment of Joy’s incredible abilities and fear leads to the emergence of a posse of men out to finish him.

(Minor spoiler in this paragraph) While battling for survival, Joy apparently mutates in the interests of self-preservation. The eternal game of Chinese whisper that human beings play ultimately spawns lore surrounding this mysterious being. Is he a man? Is he a manifestation of one of the dashavataar in Hindu philosophy? Is he a genetic anomaly? Running alongside Joy’s tale is a thread on scientists in search of a species of frog in the Western Ghats. These portions are distinct from the interviews of individuals who knew Joy, but both are shot in a documentary style designed to confuse the audience with their contrast to the fictional flavour of the rest of the film. The twain meet in an ambiguous, often humorous, sometimes poignant, always intriguing meld that makes Aavasavyuham both fascinating and perplexing, and open-ended in the best way that abstract cinema can be.

“But women are worshipped in our culture, so how can you say we treat women poorly?” is a common refrain in patriarchy. Albeit across gender divides, the stories about Joy that spread like a blaze bring to mind the myth-making around a Dalit girl who was sexually assaulted in Leena Manimekalai’s beautiful Tamil film Maadathy: An Unfairy Tale premiered at Busan in 2019. While Aavasavyuham and Maadathy are worlds apart in terms of tone, treatment and theme, they both place a spotlight on how the oppressed end up being mythologised. The deification of a rape victim in Maadathy occurred in conjunction with the terrible silence around caste and gender related violence in a patriarchal, caste-ridden society. (Minor spoilers in this paragraph) In Aavasavyuham, initially, vicious gossip is circulated to demonise Joy, project the attacks against him as a form of self-defence and camouflage his attackers’ true motives. Matters soon go out of the latter’s hands, as is inevitable, and fantastical tales about him are spun out of human imagination by the larger community.

At a post-screening discussion at the Habitat International Film Festival in Delhi this summer, Krishand himself spoke of Aavasavyuham being his version of a superhero origin story. This is not how the film worked for me since it is rooted in reality and is at pains to convince viewers of that. It is not fantasy, it could be categorised as magic realism, but if the creator’s own explanation is to be treated as sacred, then let’s just say DC and Marvel Cinematic Universe have never shown as much imagination as Aavasavyuham, which is more akin to M. Night Shyamalan’s Unbreakable trilogy in the way it deconstructs and then reconstructs the genre.

Into this brimming blend of allegory and blunt reality, a sense of humour and fear for the future, cinematographer Vishnu Prabhakar injects a meditative tone. His visuals of vegetation, water bodies and fauna are so stunning that I can almost forgive the film for the spelling errors in the text on screen (I spotted “enviromental” and “assualted”) that rob it of its finesse.

In just one of many instances of delicious audacity that blur the line between fact and fiction in Aavasavyuham, the name of the frog that scientists are searching for in the film closely resembles an actual species discovered in the Western Ghats by Delhi University researchers in 2019. 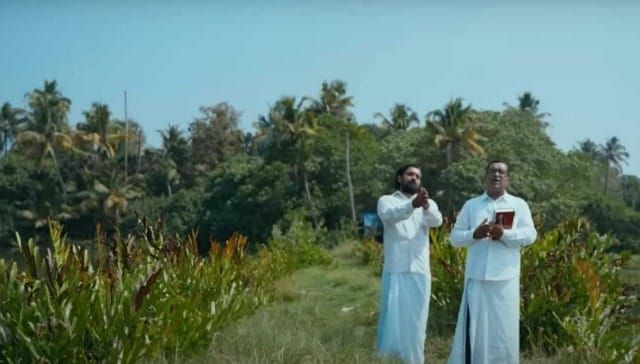 Aavasavyuham courageously casts a wide net with its social and political commentary yet never feels like it is packing in too much or sermonising. Its targets include the government, police, industry, religion and religious fanatics. In the latter though, the film appears to draw a Lakshman Rekha by specifically critiquing Hinduism and Christianity, even depicting violent Hindutvavaadis, but steering clear of the other faith with a sizeable presence in Kerala (second only to Hinduism in terms of percentage of the population), namely, Islam. This may have been done to avoid accusations of Islamophobia or even with kind intentions to spare the feelings of the Muslim community that is currently under siege in large parts of India. However, it is necessary to point out that treating any minority religion with kid gloves while making a justifiable, legitimate point about religion in general is in itself an unwitting form of othering that, in the long run, helps no one, least of all the marginalised minority in question.

Elsewhere, Aavasavyuham charges in with all guns blazing, even citing police “brutality” against real-life protestors objecting to anti-people development in Puthuvype. This makes it a significant example of freedom of expression on an otherwise dismal Indian landscape, since it received the Best Film and Best Screenplay honours at the Kerala State Film Awards given away on September 24, in addition to two awards by international juries at the International Film Festival of Kerala (IFFK) 2022 – notable in this context considering that IFFK and the state awards are organised by an autonomous body that comes under the Kerala government.

Aavasavyuham’s political stances are priceless, arguably peaking in the total disconnect shown between the statements made by some characters in their interviews versus the truth that viewers can see right before their eyes.

So what exactly is Aavasavyuham (meaning: Habitat). I guess it can most aptly be described as a fiction feature partially disguised as a documentary on the endangered ecosystem and humans of Puthuvype.

Or a mockumentary, perhaps, but one that stretches its pretence longer than might appear doable to the normal human director.

Perhaps Joy is a metaphor for the Earth, ravaged by Homo sapiens, regenerating itself, which then makes this an origin story of, not a superhero, but the planet itself.

Or wait…no…it could be sci-fi. Or a fiction feature about a documentary that is about…what exactly now?

In short, Aavasavyuham is what it is.

In a decade flooded with unrelenting brilliance and experimentation from Malayalam cinema, Aavasavyuham is not an example of mere out-of-the-box thinking. In making it, Krishand smashed the box to bits, ground its remains and tossed them into the ocean. Aavasavyuham is brave and a bit nuts, but being nuts has rarely been this much fun or, to be precise, such a perfectly measured amalgam of contemplative and fun.

Aavasavyuham is streaming on SonyLIV