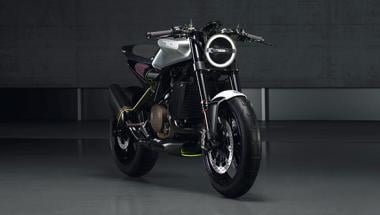 The Husqvarna Vitpilen (White Arrow) came into the world wearing the engine from the Duke 390 as well as a black-out trellis frame. Obviously, we jumped for joy. Now, the Husqvarna Vitpilen gains a suffix - 701 - at the 2015 EICMA show in Milan. There is so much history and and so many linkages here! The Vitpilen and the Svartpilen (Black Arrow) are names that draw on Husqvarna's 1950's Sileerpilen (Silver Arrow). The 701 designation comes from the 701 Supermoto and Endure machines that share the engine with the KTM 690 SMC R and the Endure R. The name suggests that futuristic cafe racer that is the Vitpilen 701 and it will wear that same KTM-based engine as well.

The exciting news is that the 701 will go into production and then on sale and Husqvarna has also confirmed that the Vitpilen 401 with the KTM 390 engine and the Vitpilen 125 with the KTM 125 Duke engine will both also go into production. The 401 is set for spring 2017. Almost certainly, the 401 and 125 will be made at Chakan by Bajaj and the 125 will remain solely as an export product - the price will too high for the Indian market to absorb.