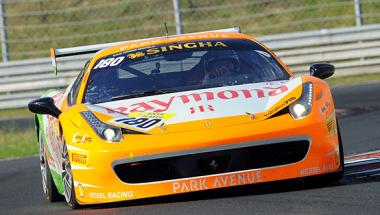 Budapest saw Gautam Singhania grab his second podium finish at the Ferrari Challenge Europe Championship this year. The Kessel Racing driver who’s debuting in the Coppa Shell Category of the championship, finished second in his class in Race 1.

The Federation of Motor Sports Clubs of India (FMSCI) endorsed championship comprises 15 races that are held across Italy, France, Spain andHungary. Singhania had also bagged a podium finish at a round held previously, in Monza, Italy.

“It is a proud moment for me to secure a podium finish at the third round of this prestigious Ferrari event. It has been a great start for me this weekend and have set my sights on the Championship and World Finals 2015,” Gautam Singhania said after his win in Budapest.

The World Final for the Ferrari Challenge Europe Championship will be held in December 2015, along side championships for North America and Asia. The competition trickles down to 40-50 cars on the grid by the end of the season.