Lunch was a simple affair, standing out for the purity and authenticity of the fare. The average Indian household supported by agriculture believes in a meal that fills the hearts and keeps energy levels up for an afternoon of hard work.

The exit of the mango season sets in motion a deep yearning ache of the delicious, succulent, widely loved fruit for another year. In my experience, it is an annual ritual of sorts, for me and those who have grown up remembering some of the best times of their lives among mango orchards or cherish the simple idea of eating mangoes for every meal for a few weeks on end. It is so, that I wanted to share an incredible experience in the heartland of a mango production that is unique, and globally recognised for its bright orange pulpy variety, the ‘Kesar’ of the Wazirs and Sultans of Junagadh.

Sitting in a roughly brushed-up clearing in an orchard at a small farm beside the Hiran river in Chitrod, Narmada Kaki (‘aunt’ in many Indian languages) rolled rotis with swift moves of her bangle-clad hands and patted them on the burning chulha (wood fire) in front of her with skilful ease. Closer inspection revealed that they were made of bajra (sorgum), of which there is an entire field just behind us. The visual convinced me of the impact that can be made by joining hands with locals, to rightfully showcase their ways and traditions to the unassuming tourist coming to Sasan Gir at the lure of Asiatic lions. The meal Kaki was making was our lunch for a beautiful day spent at Chitrod farms, which I visited during my stay at Woods At Sasan, a biophilic retreat in Sasan Gir. Under the 1000 Island brand, the retreat offers an immersive stay focussed on complete wellbeing. An agriculture-based economy has flourished in the villages surrounding the Gir National Park. In 2011, Gir Kesar Mango was allotted a GI Tag indicating the uniqueness of the orange pulped cultivar that grows only in Junagadh and Amreli districts. Approximately two lakh tonne of this exotic mango hits the markets for a short period and is expensive to the taste of a common man. It was the imperials of Junagadh who stylised the name after its colour, three years after it was first grafted on the foothills of Girnar.

The untrodden dry leaves on the ground, encompassed by vast fields sown with chawli beans and sorghum, where few Indian black Ibis were walking in search of a midday snack among the growing crops; presented a uniquely transformative situation as I found myself back in my childhood. Life in small towns gives us a chance to grow up close to nature, and I thank my parents every day for giving me an opportunity to find joy among dry leaves, growing trees and ripening fruits and a variety of residents in them. Being there felt familiar, like the times spent looking for fallen picks after a thunderstorm at my grandfather’s home.

The air redolent with the sweetest notes of ripening mangoes was so gripping that I almost didn’t notice the other arrangements.

On one side, a table had been set with a gorgeous patchwork quilt seating for two. On the other, a small char pai (four seater bed) was set up for three musicians, who had their smiles and expert hands at the ready as my eyes caught theirs. The set-up for a couple

Their instruments struck a melancholy tune, representative of the folk style of music in Gujarat. Armed with harmoniums, flutes, santoor and percussions, Chiman has been singing for many decades with his friends and fellow musicians Raju and Chandresh. Their rendition of ‘Humaar Gir Ne’, a folklore tale of Gir that talks of the richness of its soil and life with the lions, perfectly captured the essence of the experience – raw and local. Raju’s flute had a calming effect on the elevated emotions the song touched. The trio exclusively perform at Woods at Sasan and share a longstanding relationship with the retreat’s strong local empowerment ethos. They even showed me a small newspaper clip of them performing, proud to be an artist and a farmer, side by side. It was strangely pleasing to life what they have achieved for their faith that speaks in melodies. One with the musicians

Lunch was a simple affair, standing out for the purity and authenticity of the fare. The average Indian household supported by agriculture believes in a meal that fills the hearts and keeps energy levels up for an afternoon of hard work. Kaki’s ‘Bajra na rotla’ was hence wrapped around ‘Bhinda nu shaak’ (Okra fried with it’s leaves) , dipped in a light lentil curry and devoured. Athanu (sour mango pickle) and Chhunda (sweet mango pickle) played their quintessential roles in making mangoes the centerpiece of the lunch spread. Kaki occasionally threw in a smile at us while busying herself with the next batch of rotlis (whole wheat flour chapati). 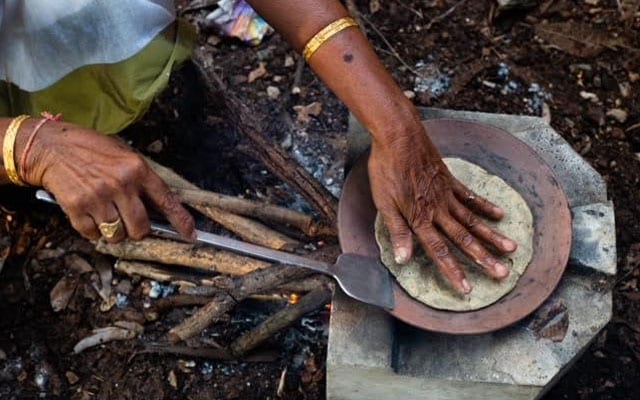 Bataka tamata (a potato dish with light tomato gravy) reminded me of bygone days when a similar dish was served by my mother along with parathas, before a tuition class or for a quick breakfast. One could wonder, “This meal is so simple, how can it be special?”

While indulging in a plate of Mohanthal (Gram flour dessert made with jaggery), Chiman’s voice resonated with the afternoon breeze. Despite the scorching sun, it was cool. A cold glass of chaas (buttermilk) to accompany melancholy musings called for a deeper reflection on the real meaning of wellbeing. It is not the many comforts of a meal at a restaurant but a meal in the open that created a sense of deep connection with the land and its residents I shared it with. The meals at the retreat itself were no less in terms of providing a sensory experience to the soul. Every day, we would have breakfast in a simple garden setup, surrounded by waking birds and the uninterrupted choir of chirps, only to be complemented by the melodious flute of Raju in the background. Dish after dish, the sattvic meal plan seemed to be deliciously healthy. I honestly didn’t expect to have an organic Patra (leaf fritters) that did not leak oil.

No less intriguing was a delightful cooking session with the Executive Chef, Haresh Patel. A man bearing a lingering smile and twinkle in his eyes, Patel has been the key contributor to the retreat’s newest offering, a Sattvic meal plan.

According to him, the menus change with the seasons and feature locally-grown vegetables, organic foods and mindfully sourced meat, fish and poultry, as they rely deeply on locally-grown produce and do not air-freight anything that comes to your plate. Even slow eating and silent eating are some of the meal experiences curated in line with the wellness approach here.

A curious demonstration took place at the Alfresco dining setup by the gorgeous pool where we made ‘Stir-fried Kathgobi melange’, with lump cabbage (kohlrabi) or commonly known ‘ganth gobi’ as the main ingredient and raw mangoes that we picked up on a morning stroll inside the property. Rich in potassium and vitamin C, the vegetable brings back fond memories of a winter curry my mother used to make, with juicy potatoes and green peas in a light yellow gravy, over a plate of steaming rice.

The idea of ‘sattva’ (meaning purity in Sanskrit) reflects in culinary style by its simplicity and closeness to nature. “Ayurveda has taught us that what we consume must have its nourishment intact, so the idea is never to overcook and retain the natural flavours by trapping it in the flavours”, explains Chef Patel.

While he explained the core principles of slow cooking, I stood there convinced. Sattva allows us to firmly remain grounded to our roots and it&#39;s something I could definitely practise more often for the simple joys. At that moment, travel made me just a wee bit richer than I was before having a meal in a mango orchard.

Wash the drumstick leaves, drain and pat them dry. In a heavy-bottomed pan, add some oil and heat well. Add mustard seeds and cumin seeds and let it crackle on medium heat. Add in the chopped ginger and sauté for a few minutes until it becomes soft. Add in the drumstick leaves, turmeric powder and stir everything to mix. Add chopped tomato and salt. When the leaves shrink, it means its cooked. Turn off the heat. Serve with Laccha Paratha accompanied by Mango Pickle/Carrot Pickle/Kathor (sauteed sprouts).