By Raya Jalabi and Lisa Barrington DUBAI (Reuters) - Yemen's Iran-aligned Houthis said on Friday they had attacked Saudi energy and military sites with 18 armed drones, and the kingdom's energy ministry reported that a projectile had struck a petroleum products distribution station, causing a fire. The Saudi-led military coalition which is at war with the Houthis said late on Thursday it had intercepted several drones aimed at Saudi Arabia. 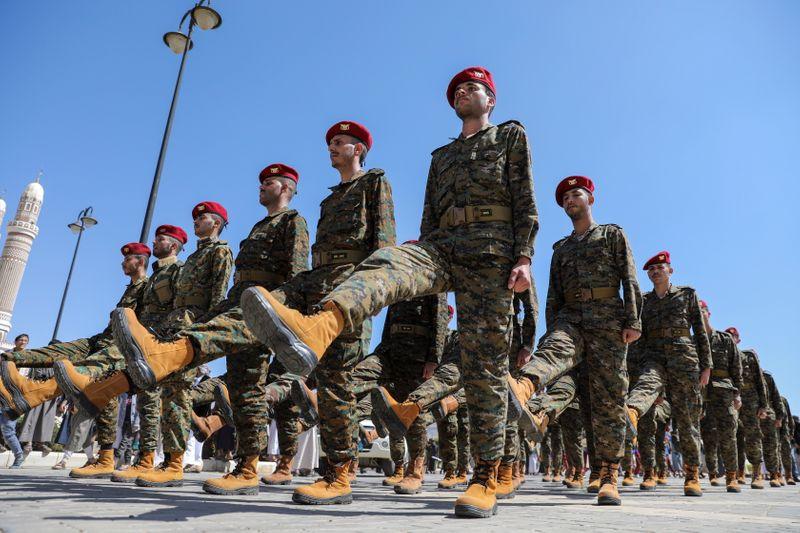 By Raya Jalabi and Lisa Barrington

DUBAI (Reuters) - Yemen's Iran-aligned Houthis said on Friday they had attacked Saudi energy and military sites with 18 armed drones, and the kingdom's energy ministry reported that a projectile had struck a petroleum products distribution station, causing a fire.

The Saudi-led military coalition which is at war with the Houthis said late on Thursday it had intercepted several drones aimed at Saudi Arabia. On Monday, Riyadh presented a peace initiative that includes a nationwide truce https://www.reuters.com/article/idUSL1N2LL182 in Yemen as the war enters its seventh year.

The United States, which under new President Joe Biden is trying to help advance the peace process and stem Yemen's worsening humanitarian crisis, on Friday condemned the attacks as a "clear provocation meant to perpetuate the conflict."

"This the latest in a series of Houthi attempts to disrupt global energy supplies and threaten civilian populations," State Department spokesman Ned Price said in a statement.

The attacks coincided with the latest trip to the region by U.S. Special Envoy Tim Lenderking, who was expected to meet with the Houthis, having said earlier this month that he would "immediately" return when they were ready to talk.

The Houthis, who control Yemen's capital and most populous areas, have stepped up drone and missile attacks on Saudi targets in recent weeks. Meanwhile, Riyadh faces increasing pressure from Washington to end the war, after Biden withdrew his predecessor Donald Trump's support for the conflict.

Houthi military spokesman Yahya Sarea said on Friday that the group had targeted facilities of state oil company Saudi Aramco in Ras al-Tanura, Rabigh, Yanbu and Jazan. He said they also targeted King Abdelaziz military base in Dammam and military sites in Najran and Asir.

"We are prepared to carry out stronger and harsher military attacks in the coming period," he said on Twitter.

Aramco, when contacted by Reuters on Friday, said it would comment at the earliest opportunity.

The Saudi energy ministry said that at 9 p.m. on Thursday a projectile had struck a petroleum products distribution station in Jazan that caused a fire in a tank. There were no casualties.

"These attacks confirm the terrorist Houthi militia's rejection of all political efforts to end the crisis," defence ministry spokesman Colonel Turki al-Malki, who also speaks for the Saudi-led coalition, said in a statement.

The Houthis are pushing for the full lifting of the coalition's sea and air blockade on areas the group controls. In addition to stepping up drone and missile attacks on Saudi Arabia, they are pressing a ground offensive to seize Yemen's gas-rich Marib region forces loyal to the internationally-recognized, Saudi-backed government of Yemen.

The war has killed tens of thousands of people and caused what the United Nations says is the world's largest humanitarian crisis, with millions facing famine.

U.N. Special Envoy to Yemen Martin Griffiths met senior Houthi official, Mohamed Abdulsalam, for talks in Oman on Friday to urge the group to enter a ceasefire and reach an agreement with the coalition, which controls Yemen's airspace, to re-open Sanaa airport.

Griffiths' office also said on Twitter that he discussed with Abdulsalam the need for an accord to lift the coalition's restrictions on the Houthi-controlled port of Hudaydah, and for the Houthis to resume the political dialogue with Yemen's internationally-recognized government.

The Saudi-led coalition intervened in Yemen in March 2015 after the Houthis ousted the government in the capital Sanaa.

The Houthis deny Saudi accusations they are puppets of Iran and say they are fighting a corrupt system and foreign aggression.