By Roberta Rampton, Matt Spetalnick and Patricia Zengerle WASHINGTON (Reuters) - When U.S. national security adviser John Bolton branded Venezuela as part of a hemispheric 'troika of tyranny' in a speech in November, the Trump administration was still struggling to decide how far it would go in confronting the country's socialist president, Nicolas Maduro. But what has taken shape in recent days is a sharply more aggressive approach based on President Donald Trump's full-throated backing for opposition leader Juan Guaido and bolstered by a coordinated diplomatic response with many of Venezuela's neighbours, who rapidly followed suit in withdrawing recognition of Maduro's rule. 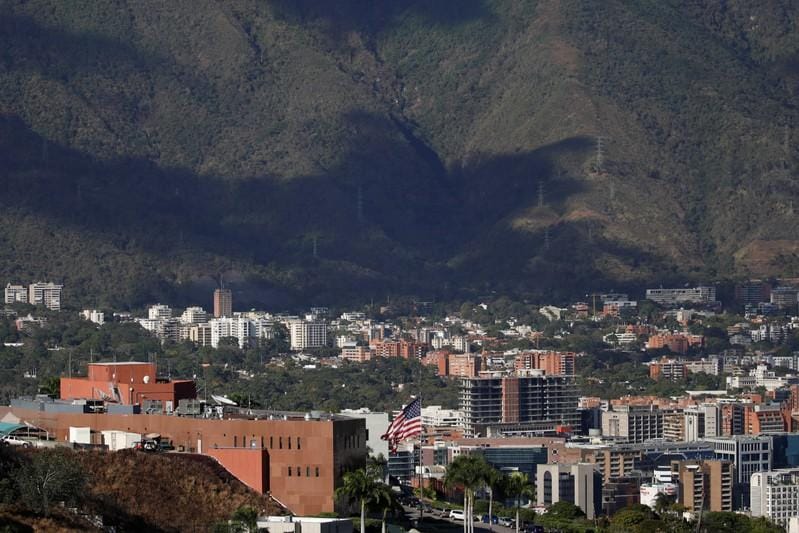 WASHINGTON (Reuters) - When U.S. national security adviser John Bolton branded Venezuela as part of a hemispheric "troika of tyranny" in a speech in November, the Trump administration was still struggling to decide how far it would go in confronting the country's socialist president, Nicolas Maduro.

But what has taken shape in recent days is a sharply more aggressive approach based on President Donald Trump's full-throated backing for opposition leader Juan Guaido and bolstered by a coordinated diplomatic response with many of Venezuela's neighbours, who rapidly followed suit in withdrawing recognition of Maduro's rule.

Driving this hardened U.S. stance is the growing assertiveness of more hawkish White House aides led by Bolton, Vice President Mike Pence's deep engagement on the issue, a push by anti-Maduro U.S. lawmakers and the arrival of like-minded rightist presidents in Brazil and Colombia, according to people familiar with the matter.

On Wednesday, Venezuelan congress head Guaido declared himself interim president, the boldest challenge in years to Maduro's hold on power.

Washington's decision to throw its weight behind Guaido, a virtual unknown in Venezuelan politics until recently, came only after it became convinced that the 35-year-old with a U.S. education was a democratic-minded leader they could trust and work with, U.S. officials said.

That was the conclusion drawn from U.S. contacts with Guaido in the days ahead of his declaration, including two phone calls with Pence, officials said, asking to remain anonymous because of the sensitivity of the situation.

In Pence's second call, which according to a White House official was kept under wraps for security reasons, the vice president assured Guaido: "We're praying for you, the U.S. stands with you, your bravery and courage are something we admire."

"It was the U.S. position that Guaido had to have the constitutional backing," the official said.

While the outcome remains uncertain and the risks are high, Trump's handling of the situation has stood in sharp contrast to his more chaotic approach to some other major foreign policy decisions, such as Iran and Syria. He has mostly stayed on message in public, consulted with his advisers and avoided antagonizing regional allies needed for their support.

Senior administration officials, including Pence, Bolton and White House Latin America adviser Mauricio Claver-Carone, made a flurry of calls to Latin American leaders ahead of Guaido's announcement to ensure that many of them would join Trump in recognising Guaido.

Questions remain about how the United States and other countries will now deal with the Maduro government's finances and diplomats and how events inside Venezuela will unfold if Maduro continues to show no signs of losing the vital support of Venezuela's military.

Trump so far has stopped short of taking the harshest economic measures – sanctioning OPEC member Venezuela's vital oil sector – but, according to people familiar with the matter, even that is under is under consideration if Maduro cracks down hard on the opposition.

U.S. military intervention is widely seen in Washington as an unpalatable and unlikely option.

However, Trump has taken an increasingly tough line with Venezuela since he took office in January 2017, imposing an escalating series of targeted sanctions. But there has been growing frustration within the administration that more was needed.

U.S. Senator Marco Rubio is considered to have played a major role in convincing fellow Republican Trump to ratchet up pressure on Maduro, subtly reminding him of the importance of the Cuban-American vote in presidential swing state Florida.

"The president's instincts have always been to do the strongest possible action (against Venezuela) that doesn't undermine the cohesion of this multilateral approach," Rubio told Reuters.

Rubio led a delegation of Florida lawmakers to discuss Venezuela with Trump on Tuesday, although an aide said Trump had decided before the meeting to recognise Guaido.

Bolton, known for his harsh views on the Latin American left, laid some of the groundwork well before Guaido's emergence.

In a November speech in Miami, home to large numbers of immigrants from Cuba and Venezuela, Bolton pledged that the United States would crack down on what he called "the troika of tyranny" in the Western Hemisphere, naming Cuba, Venezuela and Nicaragua.

Bolton also met Jair Bolsonaro, then Brazil's president-elect, in late November and discussed how the far-right leader could cooperate with the United States to pressure Venezuela. Brazil was one of the first countries to recognise Guaido.

The stricter approach to Venezuela has also been pushed by Claver-Carone, named by Bolton as his top Latin American adviser after Bolton took over at the National Security Council last year. Claver-Carone is known as a hardliner on communist Cuba and outspoken critic of former President Barack Obama's rapprochement with Havana.

Bolton has also worked with U.S. Secretary of State Mike Pompeo to form a united front within the administration, needed to overcome resistance from career State Department diplomats. Venezuela has long been a divisive issue in the State Department, with some diplomats pushing for dialogue and others backing deeper sanctions.

The departure last year of veteran diplomat Tom Shannon, who favoured dialogue with Caracas and was often dispatched for talks with Maduro, helped open the door to those who wanted a heavier-handed approach, according to U.S. officials.

One senior official, who spoke on condition of anonymity, said there was concern among some in the department that by recognising Guaido the United States would divide the region, especially as Mexico's new leftist government supports Maduro.

While acknowledging that mediation efforts had failed, the official said there were also worries that as long as the Venezuelan military supported Maduro, little would change.