By Alexis Akwagyiram LAGOS (Reuters) - Ozioma Egemasi says Nigerian police slapped, whipped and struck him with the butt of a pistol when he refused to pay them a bribe. Then he heard them discuss whether to kill him. 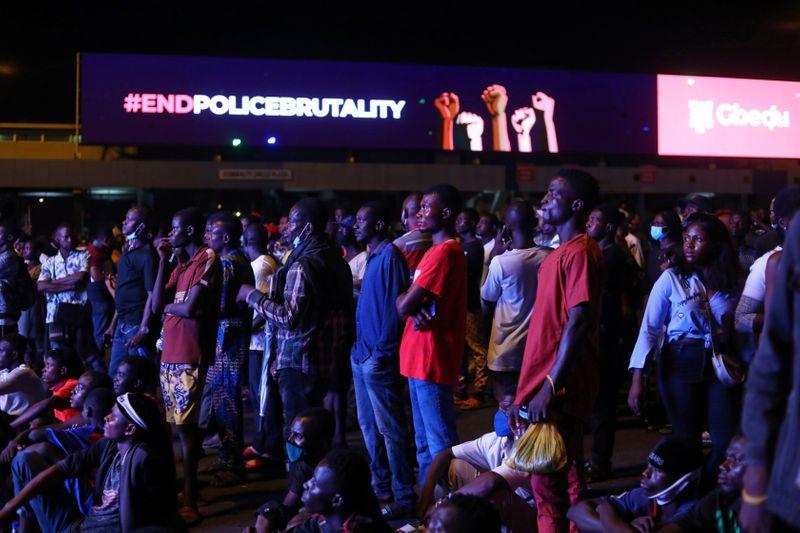 LAGOS (Reuters) - Ozioma Egemasi says Nigerian police slapped, whipped and struck him with the butt of a pistol when he refused to pay them a bribe. Then he heard them discuss whether to kill him.

The 24-year-old music label manager shared his experience on Instagram, one of thousands of mostly young Nigerians who are taking to social media to speak out against alleged abuses by police and to coordinate ongoing protests.

Thousands of people have taken to the streets daily across the country in one of the biggest shows of public anger in 30 years, posing a major challenge to President Muhammadu Buhari amid an economic slump made worse by the coronavirus

"I was scared. It meant they were willing to do anything to get whatever they wanted to get from me," said Egemasi, recalling the January encounter with members of Nigeria's Special Anti-robbery Squad (SARS).

Reuters could not independently verify his account. A Lagos state police spokesman did not respond to phone calls and a text message seeking comment on the allegations.

The police force has previously denied accusations against SARS that are fuelling the unrest, although it said earlier this month that "unruly and unprofessional" officers had been arrested and were facing disciplinary actions.

Other concessions have been made since nationwide demonstrations began on Oct. 8: SARS was disbanded on Oct. 11 and a new police unit, the Special Weapons and Tactics (SWAT) team, was created to "fill the gaps".

But it has not had the desired effect. Protesters say they have heard such promises before and demand deeper changes, including the prosecution of police accused of wrongdoing.

Rallying under the #EndSars hashtag and harnessing social media to raise awareness and funds and to garner support from international celebrities, protesters have built a momentum that previous actions led by civil groups and unions failed to do.

"They have increasingly connected young, urban populations that have found a cause, and social media has triggered very rapid momentum," Goldman said.

The Nigerian protesters have drawn support from Black Lives Matter activists in the United States, including the movement's co-founder Opal Tometi, and from Canadian rapper Drake and British-Nigerian actor John Boyega.

A Twitter account using the name of the internet activist collective Anonymous said last week it had hacked into Nigerian government websites in solidarity with the #EndSars campaign. Government officials did not confirm any breaches. [L8N2H80L6]

Members of Nigeria's burgeoning tech industry, a bright spot for foreign investors in Africa's most populous nation, say they are often singled out by police for spot checks.

Iyinoluwa Aboyeji, co-founder of software developer training firm Andela and payments company Flutterwave, said so many employees had been harassed that his companies had protocols in place to call senior police officials in the event of an arrest.

Egemasi said his laptop and financial transactions on his cell phone aroused the suspicion of the five SARS officers who stopped him in a Lagos street at the start of the year.

"This happens all the time to young people because they believe we are young and not supposed to have that kind of money," he told Reuters.

As he spoke, Egemasi was surrounded by more than a thousand protesters at a toll gate in the upmarket Lekki district of Lagos on Saturday.

Music blared out of tall speakers. A giant electronic billboard displayed slogans such as "Soro Soke", a Yoruba phrase meaning "Speak Up". And activists doled out free food and collected litter in black plastic bags.

Such gatherings have largely been financed through crowdfunding, activists say.

The Feminist Coalition, a Nigerian rights group coordinating some of the logistics, said on its fundraising page it had received more than 73 million naira ($192,000) as of Sunday.

The funds have been used to hire private security guards to defend protesters against armed gangs who attacked some demonstrations last week, pay for private ambulances and cover the legal bills of more than 70 participants arrested across Nigeria, according to a spokeswoman for the group.

The crowdfunding is necessary to avoid political interference, said the spokeswoman, who asked not to be identified for fear of censure by the government.

"This is a decentralized, democratic process."

Two Nigerian banks closed the group's accounts last week, so they converted their savings to bitcoin and started fundraising in the cryptocurrency, she added.

The crowdfunding has helped make the demonstrations among the biggest and longest-running in decades, said Cheta Nwanze of SBM Intelligence, a Lagos-based risk advisory firm.

The provision of free food was a "very good use of resources," he added. Most people live on less than $2 a day.

"It's helping to sustain the momentum."