By Elizabeth Piper LIVERPOOL, England (Reuters) - British opposition Labour leader Jeremy Corbyn will promise on Wednesday to 'kickstart a green jobs revolution' by fostering investment in housing, wind and solar energy to bring jobs 'to communities held back for too long'. On the final day of his party's annual conference, Corbyn will make a direct bid for the support of those Britons outside the capital who voted to exit the European Union, often in frustration at feeling left behind by a London-based elite. 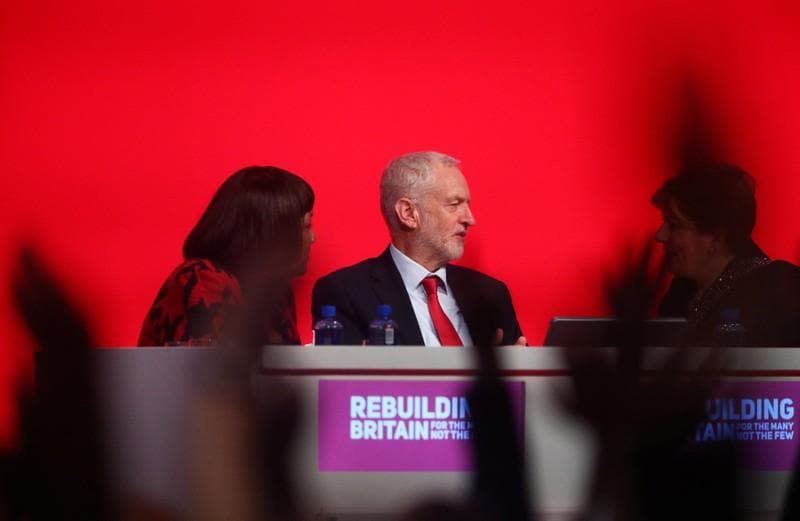 LIVERPOOL, England (Reuters) - British opposition Labour leader Jeremy Corbyn will promise on Wednesday to "kickstart a green jobs revolution" by fostering investment in housing, wind and solar energy to bring jobs "to communities held back for too long".

On the final day of his party's annual conference, Corbyn will make a direct bid for the support of those Britons outside the capital who voted to exit the European Union, often in frustration at feeling left behind by a London-based elite.

As part of what he called his "radical plan to rebuild and transform Britain", Corbyn will say a Labour government will create more than 400,000 skilled jobs nationwide by investing in technologies to cut net carbon emissions by 60 percent by 2030, and zero by 2050.

Britain is not due another election until 2022, but Labour is already preparing for a snap vote.

Despite her denials, few are ruling out an early election after Prime Minister Theresa May's already precarious position was further weakened last week when her Brexit proposal, already unpopular in her Conservative Party, was rebuffed by the EU.

Corbyn will take aim at the "greed-is-good, deregulated financial capitalism" that led to the 2008 financial crisis, saying politicians, including in his own party, had failed to make "essential changes to a broken economic system" and instead propped up a system that "led to the crash in the first place".

"That's why Labour is offering a radical plan to rebuild and transform Britain," he will say, according to excerpts of his speech. "Labour will kickstart a green jobs revolution."

Corbyn and his team of so-called shadow ministers have peppered the conference with policy announcements, trying to show that they are ready for the long term. The green jobs plan would cover two terms in government.

With announcements ranging from handing workers shares in companies to expanding free universal childcare, Labour wanted to showcase their planning for an election many feel could come sooner rather than later.

But the conference was also overshadowed by disputes over Brexit, Britain's biggest trade and foreign policy shift in more than 40 years, after party members pushed for a second referendum on EU membership to remain on the table.

Corbyn, a veteran eurosceptic, accepted the motion, but on Tuesday sidestepped questions over which way he would vote in a second referendum and seemed to cast doubt over whether it would happen.

"We will challenge this government. If they don't meet our six tests (for any Brexit deal), we will vote against it, and then we will take it from there," he said in a television interview.

But, some Labour members say, Brexit is a sideshow for Corbyn, and he would much prefer to concentrate on Labour's manifesto, detailing how, if in government, the party would spend its 250 billion pound National Transformation Fund to reboot the economy.

"There is no bigger threat facing humanity than climate change. We must lead by example," Corbyn will say. "It needs a government committed to investing in renewables, in jobs and in training."

The Conservatives and Labour are running virtually neck and neck in opinion polls.