By Ghaida Ghantous DUBAI (Reuters) - Saudi Arabia will move faster than its allies to reconcile with Qatar, sources familiar with the matter said, aiming to impress the incoming Biden administration by ending what the West sees as a parochial dispute that benefits only mutual foe Iran. The rapprochement reduces potential points of friction between Riyadh and a U.S. government sure to be less forgiving than outgoing President Donald Trump, who has consistently protected the kingdom from criticism of its human rights record 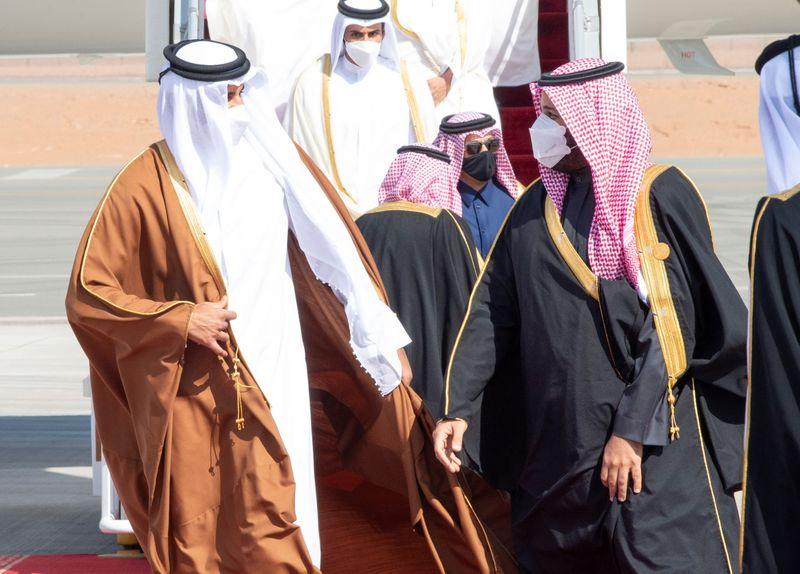 DUBAI (Reuters) - Saudi Arabia will move faster than its allies to reconcile with Qatar, sources familiar with the matter said, aiming to impress the incoming Biden administration by ending what the West sees as a parochial dispute that benefits only mutual foe Iran.

The rapprochement reduces potential points of friction between Riyadh and a U.S. government sure to be less forgiving than outgoing President Donald Trump, who has consistently protected the kingdom from criticism of its human rights record.

In a move that cast the kingdom as a force for stability in a turbulent region, Saudi de facto ruler Crown Prince Mohammed bin Salman chaired a summit on Tuesday that declared an end to the bitter rift in which Saudi Arabia, the United Arab Emirates, Bahrain and Egypt have boycotted Qatar since mid-2017.

The kingdom said at the gathering that all four states had agreed to restore diplomatic, trade and travel ties with Doha under a U.S.-backed deal, but the three sources said the other three nations had been pressed to sign a general declaration and were likely to move more slowly as deep divisions remain.

"Saudi Arabia is way ahead of the others, who could drag their feet," said one source familiar with the matter. "The declaration was kept general to ensure all parties signed it."

The UAE, Bahrain and Egypt have yet to announce specific measures to rebuild ties, severed over allegations that Qatar supports terrorism, a charge that Doha denies.

Each of the three countries have had their own differences with Qatar.

The UAE and Egypt both resent Qatar’s support for Islamists, especially the Muslim Brotherhood, the world's oldest Islamist movement, which they see as a political foe. Bahrain, an arch critic of Iran, is uneasy about Qatar's even-tempered relations with Tehran and the kingdom also has a territorial dispute with Doha.

The Trump administration has for over a year been pressing for a resolution, particularly reopening airspace to Qatar, to bolster efforts to contain Iran. But a deal had proven elusive despite U.S. and Kuwaiti mediation efforts.

White House senior adviser Jared Kushner and other officials made a renewed push with the support of Prince Mohammed, the source said, handing Trump another diplomatic win after normalisation deals between Israel and several Arab states.

"We wanted to get it done before the end of the term," a senior Trump administration official to Reuters. "I expect the same level of compliance as Saudi Arabia," the official said of other boycotting nations.

Saudi Arabia is currently the only one taking active steps to reopen its airspace and borders to Qatar and restore diplomatic ties, the three sources said.

For Riyadh's allies, the third informed source said, it will be very hard to retreat from Tuesday's announcement, but may also be difficult to move forward fast and that some view the deal at the summit as "a starting point rather than the finish line".

Saudi Arabia, which lobbied hard for Trump's maximum pressure campaign against foe Iran, has come under international scrutiny over its human rights record following the 2018 murder of journalist Jamal Kashoggi and over the ruinous Yemen war.

For Prince Mohammed, seen by critics as an unpredictable leader, his push for detente with Qatar appeared aimed at showcasing him as a statesman seeking regional stability.

President-Elect Joe Biden has said he would take a harder line against the kingdom, an oil exporting giant and major buyer of American arms, over those issues.

Diplomats in the region and analysts have said Riyadh's push for Gulf detente was largely aimed at positioning Riyadh as a valuable U.S. partner at a time of regional tensions with Iran.

"But it can be assumed that the UAE, Egypt and Bahrain will scrutinise Qatar's conduct through a magnifying glass before they expand reconciliation measures with it," it added.

The UAE, which has largely extricated itself from Yemen and forged ties with Israel last year, is not expected to face the same kind of pressure as Riyadh from a Biden administration.

It remains at cross purposes with Qatar and Turkey over Libya and the Muslim Brotherhood, also key issues for Egypt.

Senior Emirati official Anwar Gargash told Al Arabiya TV on Tuesday it would take time to rebuild trust and that the agreement established "foundations" to end the row.

The boycotting nations had set Doha 13 demands, including closing Al Jazeera TV, shuttering a Turkish base, cutting links to the Muslim Brotherhood and downgrading ties with Iran.

A U.S. official has told Reuters that under the deal, Qatar would suspend legal cases linked to the boycott. Qatari officials have insisted any resolution must be based on mutual respect of sovereignty, including foreign policy.

"The thaw may do little to dampen competition between Qatar and the UAE, and their respective allies in regional hotspots," said Elham Fakhro, senior Gulf analyst at International Crisis Group.