By Elizabeth Howcroft LONDON (Reuters) - WikiLeaks founder Julian Assange is not getting the time he needs with his legal team to discuss his fight against extradition to the United States, causing delays to the case, his lawyer told a British court on Monday. After skipping bail in Britain, Assange spent seven years holed up in Ecuador's embassy in London before he was dragged out by police in April last year. 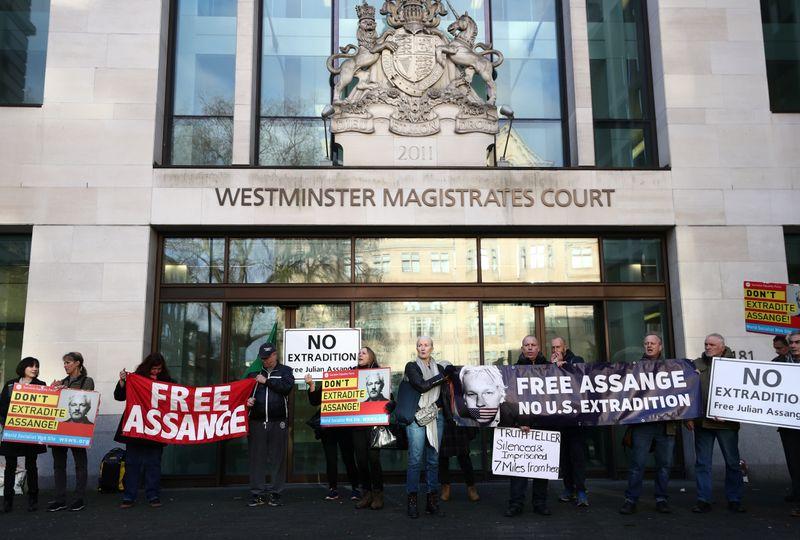 LONDON (Reuters) - WikiLeaks founder Julian Assange is not getting the time he needs with his legal team to discuss his fight against extradition to the United States, causing delays to the case, his lawyer told a British court on Monday.

After skipping bail in Britain, Assange spent seven years holed up in Ecuador's embassy in London before he was dragged out by police in April last year.

He is being held in a British jail pending the U.S. extradition case, having served a sentence for skipping bail.

The United States wants him extradited to face 18 charges including conspiring to hack government computers and violating an espionage law. He could spend decades in prison if convicted.

The 48-year-old Australian appeared for Monday's hearing at Westminster Magistrates Court wearing glasses and a dark blazer over a light top. He spoke only to confirm his name and date of birth to the judge and saluted his supporters in the public gallery at the beginning and end of the hearing.

Assange's lawyer Gareth Peirce said difficulty in getting time with Assange had delayed the case, telling the court: "This slippage in the timetable is extremely worrying."

He fled to Ecuador's embassy in 2012 to avoid being sent to Sweden to face sex crimes accusations that were dropped last year.

He says the U.S. charges against him are a political attempt to silence journalists and publishers, and that the Swedish allegations were part of a plot to catch him.

Assange made global headlines in early 2010 when WikiLeaks published a classified U.S. military video showing a 2007 attack by Apache helicopters in Baghdad that killed a dozen people, including two Reuters news staff.

Judge Vanessa Baraitser said Assange could have time on Monday to speak to his lawyer and appear in court again later in the day. In that second sitting, Peirce said that she had only had an hour to speak to Assange.

Assange's next hearing is scheduled for Jan. 23. He is due to appear via video link from London's Belmarsh prison.

Full extradition proceedings are expected to commence in February.