By Steve Holland WASHINGTON (Reuters) - Senior White House officials on Friday sought to use the momentum from a historic deal between Israel and the United Arab Emirates to appeal to more Arab and Muslim countries to set aside long-standing tensions and make similar agreements. A senior White House official said President Donald Trump's senior adviser, Jared Kushner, and Middle East envoy, Avi Berkowitz, had been in touch with numerous countries in the region trying to see if more agreements would materialize. The official would not name names. 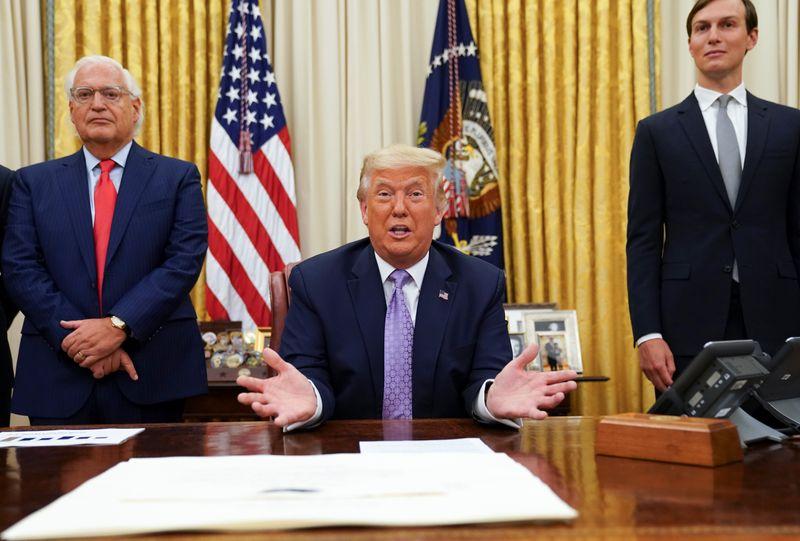 WASHINGTON (Reuters) - Senior White House officials on Friday sought to use the momentum from a historic deal between Israel and the United Arab Emirates to appeal to more Arab and Muslim countries to set aside long-standing tensions and make similar agreements.

The official would not name names.

Speculation immediately centered around two Gulf nations, Bahrain and Oman, both of which welcomed the deal Trump announced on Thursday for Israel and the United Arab Emirates to have a full normalization of relations. Sudan was also a subject of speculation.

Bahrain hosted a U.S.-led Middle East conference a year ago aimed at raising money for the Palestinians and Jordan as part of Trump's Middle East peace initiative.

The Israel-UAE deal was viewed widely as a foreign policy victory for Trump as he struggles to contain the coronavirus pandemic in the United States and resulting economic recession while facing a tough battle for re-election on Nov. 3.

Trump said on Thursday he expected to have a signing ceremony for the deal in about three weeks with delegations from each country.

Kushner and Berkowitz are making the case to other countries that improved ties with Israel can have economic benefits and can help counter Iranian influence in the region.

"If you're an Arab or Muslim country and you see the positive reception the world gave this agreement, it would be natural to see this as a really historic time and opportunity and we are optimistic ongoing negotiations will prove fruitful," the official said.