By Andy Sullivan, Brad Heath and Mark Hosenball WASHINGTON (Reuters) - The harassment campaign against U.S. election officials following President Donald Trump's defeat took an ominous turn on Thursday after a website surfaced that accused them of 'treason' and included photographs and home addresses, drawing the attention of U.S. intelligence agencies. 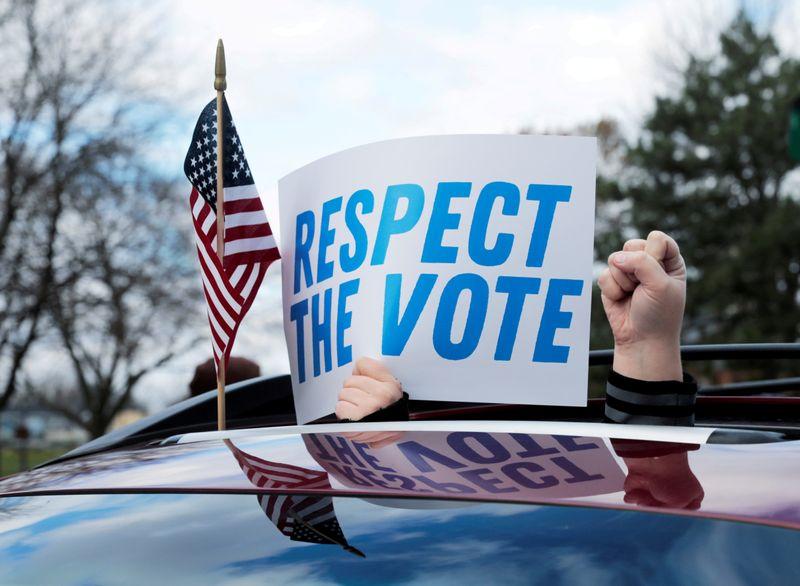 WASHINGTON (Reuters) - The harassment campaign against U.S. election officials following President Donald Trump's defeat took an ominous turn on Thursday after a website surfaced that accused them of "treason" and included photographs and home addresses, drawing the attention of U.S. intelligence agencies.

The site, along with several associated social media accounts, included photographs of Republican and Democratic officials, with rifle crosshairs superimposed on them.

Several of the officials targeted said the messaging amounted to a call for violence against those who worked to oversee the Nov. 3 election, which Trump lost to Democratic President-elect Joe Biden. They urged Trump to denounce it.

"If anyone needs to be reminded that public calls for violence beget violence, this is the clarion call. If blood is spilled, it is on the hands of the president, his campaign, his lawyers, and the silent Republicans standing in the president's shadow," said Jim Walden, a lawyer for Christopher Krebs, who oversaw cybersecurity at the Department of Homeland Security until he was fired by Trump after the election.

"Trump and U.S. senators have refused to condemn these death threats," she told Reuters. "In fact, he continues to support those who are actively calling for elections officials to be shot."

The Trump campaign did not immediately respond to a request for comment.

Trump has for weeks been alleging contrary to evidence that his 306-232 Electoral College defeat was the result of widespread fraud.

State and federal officials have said there is no evidence of any large scale fraud in the 2020 election or other recent U.S. elections.

Republican, Democratic and nonpartisan election authorities nationwide have faced intimidation, harassment and outright threats since the vote. Despite losing by more than 7 million votes, Trump has refused to concede and has challenged the outcome with lawsuits in multiple states. Courts so far have rejected those efforts.

Supporters of Trump in recent weeks have staked out election offices in Georgia, mounted armed protests in Arizona and left intimidating telephone messages for election officials across the country, in a campaign of harassment and menacing unlike any other in modern U.S. history.

Experts who track right-wing extremists said they did not know who was behind the online effort, which includes several websites and associated social media accounts. But they described it as a serious threat.

"This is absolutely terrifying," said Heidi Beirich, co-founder of the Global Project Against Hate and Extremism. "This is among the most threatening websites I've seen."

Internet records hide the identity of whoever set up the site. Cybersecurity experts helping with election security said one of the pages was hosted in Russia, and some records include accounts registered through Yandex, a Russian email platform. Those links do not necessarily mean that the Russian government is behind the effort, the experts said.

As of early Thursday afternoon, associated accounts on Facebook and Twitter had been taken down, but remained active on Parler and Gab, two social media networks favored by right-wing activists.

The site also targeted several employees of Dominion Voting Systems, a voting-machine vendor that has been subject to unsubstantiated conspiracy theories of vote manipulation.

A Dominion spokeswoman said those false claims have resulted in dangerous threats to the company and its workers.