'We don't see the enemy' concealed jihadists slow IS defeat

DEIR AL-ZOR PROVINCE, Syria (Reuters) - The young Syrian man crossing out of Islamic State's last enclave in eastern Syria brought confirmation that the fight was still not over despite days of ferocious bombardment by U.S.-backed forces. 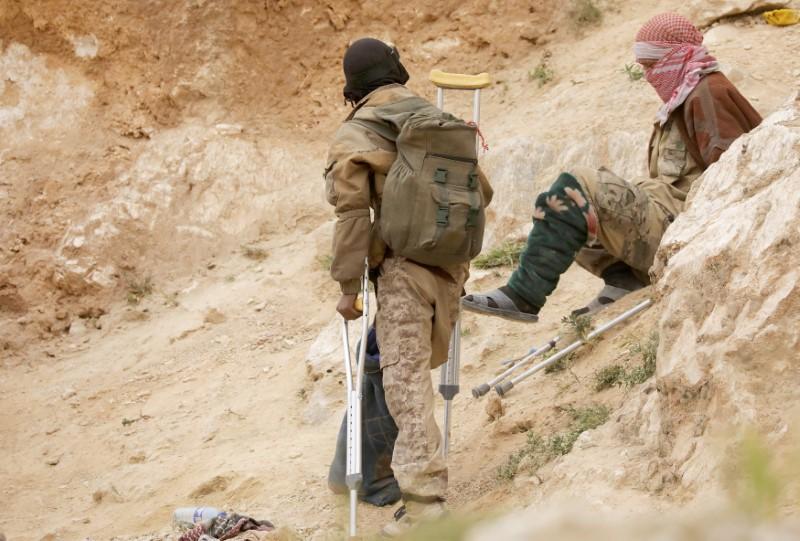 DEIR AL-ZOR PROVINCE, Syria (Reuters) - The young Syrian man crossing out of Islamic State's last enclave in eastern Syria brought confirmation that the fight was still not over despite days of ferocious bombardment by U.S.-backed forces.

"There are people coming out and others not coming out," said the bearded man wearing a robe and head scarf, one of hundreds of people who left the enclave at Baghouz on Thursday to surrender to the Syrian Democratic Forces (SDF).

Asked if there were many people still inside, he said "yes" in the footage obtained by Reuters from the Kurdish TV station Ronahi. "I was injured in my back," said the man, originally from the nearby city of Deir al-Zor.

On Friday suicide attackers struck a group of people leaving Baghouz and surrendering, the SDF said, the first such blasts to target any of the thousands of people abandoning the enclave.

It has been five weeks since the SDF declared the start of its attack on the enclave, a group of villages surrounded by farmland where IS fighters and followers retreated as their "caliphate" was driven from once vast territories.

While Islamic State's defeat at Baghouz has appeared a foregone conclusion - U.S. President Donald Trump prematurely declared the group "100 percent" beaten on Feb. 28 - the SDF has yet to deal the final blow.

The campaign has stalled to allow for the evacuation of large numbers of people, many of them wives and children of IS fighters. The SDF has evacuated thousands of people from the enclave, adding to the tens of thousands who have crossed out of the diminishing IS territory in the last few months.

The assault has also been complicated by resistance from hardened jihadists holed up inside seeking a fight to the death.

A big push this week has met with counter attacks involving groups of suicide bombers who had survived intensive artillery bombardments and air strikes by a U.S.-led international coalition.

More women and children emerged from the enclave on Thursday along with wounded men, many of them limping, with crutches or propped up by walking sticks as they hobbled along a dirt track out of the remaining IS area.

Some of the women, fully veiled and dressed head-to-toe in black, carried babies wrapped in blankets.

The SDF believes Islamic State has dug extensive tunnels and shelters, tactics it used in places such as Raqqa, its former Syrian headquarters that the SDF captured in 2017.

"The numbers that came out in the last 20 or 25 days were truly a surprise," SDF spokesman Kino Gabriel said.

"The reality we have seen shows the extent of preparations by Daesh for this last battle," he said, using the Arabic acronym for Islamic State.

"You have the mines, the bombs, the tunnels and shelters. We don't see the enemy in front of us."

The SDF has said it is proceeding cautiously in Baghouz to avoid losses and the fighting continued on Friday, with machine-gun battles and shelling.

"The operations will take the time needed to ... completely eliminate Daesh," Gabriel said.

U.S. envoy James Jeffrey said Islamic State was down to its last few hundred fighters and less than a square kilometre of land in the battle, although it may have 15,000-20,000 adherents in Syria and Iraq.

France said on Friday that it had brought back five young children from camps in northern Syria, but repeated its position that adult citizens who had joined Islamic State should stay where they are and face justice.

Western nations have been wrestling with how to handle suspected militants and their families seeking to return from combat zones in Iraq and Syria, as well as those in detention, as more pour out of Baghouz.

(Additional reporting by a Reuters journalist in Deir al-Zor province and Tom Miles in Geneva; Writing by Tom Perry; Editing by Robin Pomeroy and Raissa Kasolowsky)