'We are staying': distraught families wait for news of missing after deadly Indian floods

By Alasdair Pal TAPOVAN, India (Reuters) - When Tarun Dev first saw reports of flooding in India's Himalayas, he felt afraid. His brother, Jugal Kishore, a 35-year-old electrical engineer, was one of 70 workers at the Rishiganga Hydroelectric Project when a flash flood on Sunday destroyed two power stations and left more than 200 people missing 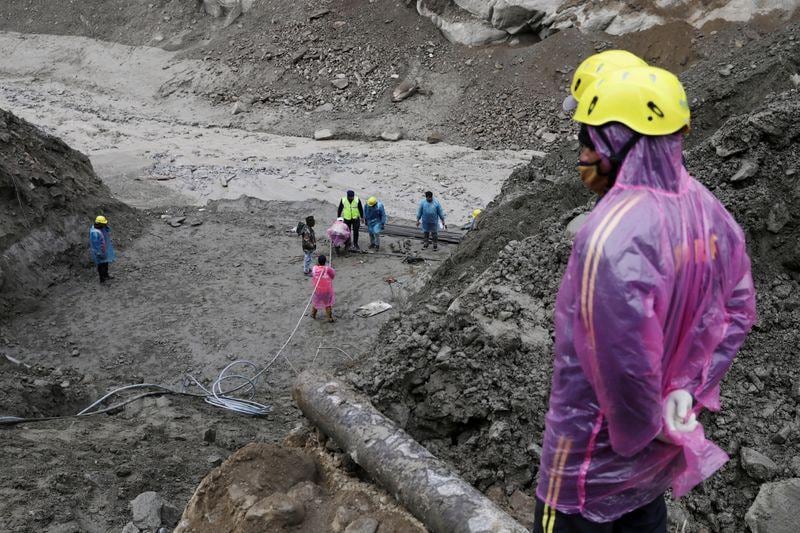 His brother, Jugal Kishore, a 35-year-old electrical engineer, was one of 70 workers at the Rishiganga Hydroelectric Project when a flash flood on Sunday destroyed two power stations and left more than 200 people missing.

The family immediately set off from their home in Punjab.

"Since Monday, we have been at this spot," he said, treading gingerly on the warped floorboards of what used to be the staff guesthouse, weakened from a thick coating of mud.

"I called his phone, it was ringing until this morning," he said. "If his phone survived, maybe he survived."

Relief workers stood by a crater holding body bags, but Dev said he refused to give up hope.

"Until we get the body, we are staying."

Hundreds of police, military and specialists ranging from engineers to drone pilots are working at the site of the disaster, the cause of which is not yet certain.

Originally thought to be a glacier breaking apart and crashing into the river, some scientists now say it was more likely to have been due to an avalanche.

Four days into the rescue efforts, chances of survival are receding, those involved in the operation say.

Many of the missing men are migrant labourers, supporting entire families back home. Other are locals lured by one of the few sources of stable income in the region.

Sati Negi's brother, 30-year-old Patminder Bisht, is one of 30 workers trapped hundreds of metres into a service tunnel at the larger Tapovan Vishnugad hydroelectric project downstream. She and her sister, Deepa Chauhan, have spent the week waiting at the mouth of the tunnel for rescuers to show them photos and videos after emerging.

"He is a good husband and father," she said, as excavators hauled mud from the shaft. "He has two daughters and one of them is a heart patient. What will they do if he doesn't come back?"

At Rishganga, the low-lying staff quarters meant many there stood little chance of reaching safety.

Kamal Chauhan, the 38-year-old project head of the site, was walking to breakfast on Sunday morning when he heard villagers shouting on a nearby hill.

Looking up, he saw a cloud of mud and dust roaring down the valley.

And so he ran, calling on his men to follow him to higher ground as it grew rapidly closer, destroying everything in its path.

Only a few of them did in time, he said.

He stayed behind to help show police where to look for bodies. But his thoughts are elsewhere.

"I can't explain how I'm feeling," he said. "My mind doesn't know what to think."

(Reporting by Alasdair Pal in Tapovan; Editing by Alexandra Hudson)