By Brian Ellsworth and Sarah Kinosian CARACAS (Reuters) - Lines were short at polling places across Venezuela during parliamentary elections held on Sunday, where opposition leaders called on a populace frustrated by years of economic crisis to boycott a vote they deemed a fraud by President Nicolas Maduro. 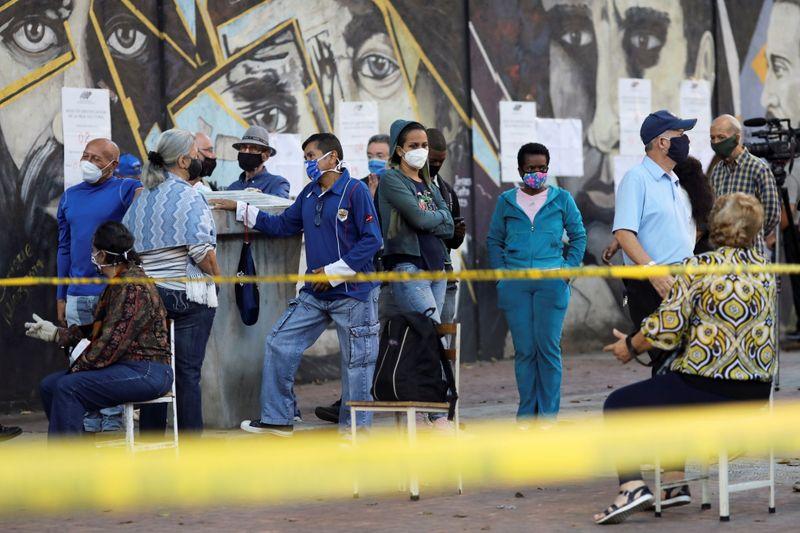 By Brian Ellsworth and Sarah Kinosian

CARACAS (Reuters) - Lines were short at polling places across Venezuela during parliamentary elections held on Sunday, where opposition leaders called on a populace frustrated by years of economic crisis to boycott a vote they deemed a fraud by President Nicolas Maduro.

The vote is almost certain to return congress - the last state institution not in the hands of the ruling Socialist Party - to Maduro's allies despite an economy in ruins, aggressive U.S. sanctions that stifle the OPEC nation's oil exports, and the migration of some 5 million citizens.

Members of the new congress will have few tools to improve the lives of Venezuelans whose monthly salaries rarely cover the cost of a day's groceries, nor will their election improve Maduro's reputation among Western nations for mismanagement and undermining of human rights.

The vote could, however, provide legitimacy for Maduro to offer investment deals to the few companies around the world willing to risk running afoul of Washington's sanctions for access to the world's largest oil reserves.

Many Venezuelans struggling with basic needs such as electricity, security and food express weariness with the country's politicians, who they say have done nothing to stem the slide in living conditions.

"Vote for what?" said Nellie Delgado, 70, who works as an administrator at an evangelical church in Caracas. "The country's situation is grave, and my pension is worthless, but there's no good option."

Fewer people than in past elections were waiting to vote outside Caracas-area polling stations on Sunday morning, Reuters witnesses said. Maduro allies said on Sunday that the short lines were the result of quick, efficient voting systems.

In the opposition stronghold of eastern Caracas, lines were shorter at voting centers than at service stations, where drivers can spend hours trying to buy fuel that is scarce because of sanctions and the collapse of the oil industry.

The election closes a cycle that began in 2015 when a euphoric opposition celebrated winning congress by a landslide, only to see their legislative powers swept aside by pro-government courts and the creation in 2017 of an all-powerful body known as the National Constituent Assembly.

Opposition leader Juan Guaido, head of the current congress, said Venezuelans should skip the vote and participate in a Dec. 12 consultation that will ask citizens if they reject Sunday's vote and whether they want a change of government.

Maduro blames the country's woes on the opposition, which he says has used its control of congress and its alliance with the United States to sabotage the economy.

"We have held on for five years," Maduro said in a state television address on Sunday. "What is the worst that the National Assembly has done to the country? It was treason, at having requested sanctions against the economy and the people, which has brought us into this painful situation."

'I WANT TO SEE CHANGE'

Maduro supporters said the government had done the best it could in the face of sanctions.

"I want to see change in the assembly, Guaido only wanted to destroy the country," said Robert Briceno, 47, a teacher in Caracas who said the government last week supplied computers and other equipment to his school.

Opposition leaders and their overseas allies this year say government meddling in the process simply went too far. The pro-government supreme court handed key opposition parties to politicians who were expelled from those parties on suspicion of being in league with Maduro, effectively allowing the government to choose the opposition.

They note the elections council was named without the participation of the opposition-run congress, in violation of the constitution, and that Maduro's government refused to allow for meaningful electoral observation.

"The results announced by the illegitimate Maduro regime will not reflect the will of the Venezuelan people," U.S. Secretary of State Mike Pompeo wrote on Twitter. "What's happening today is a fraud and a sham, not an election."

Guaido has been recognized by more than 50 countries including the United States as Venezuela's legitimate interim president, after most Western nations disavowed Maduro's 2018 re-election as fraudulent.

Those countries are expected to continue their recognition of Guaido.