By Terray Sylvester PAHOA, Hawaii (Reuters) - Smog from Hawaii's Kilauea volcano drifted north up the island chain on Wednesday and communities south of its summit were warned of up to a quarter-inch (0.6 cm) of ashfall as the nearly two-week eruption showed no sign of easing. Rockfalls and explosions in Kilauea's crater sent ash and smoke spewing thousands of feet above the volcano, sparking an aviation red alert. A change in prevailing winds blew the volcanic smog, or vog, north toward the next island, Maui. 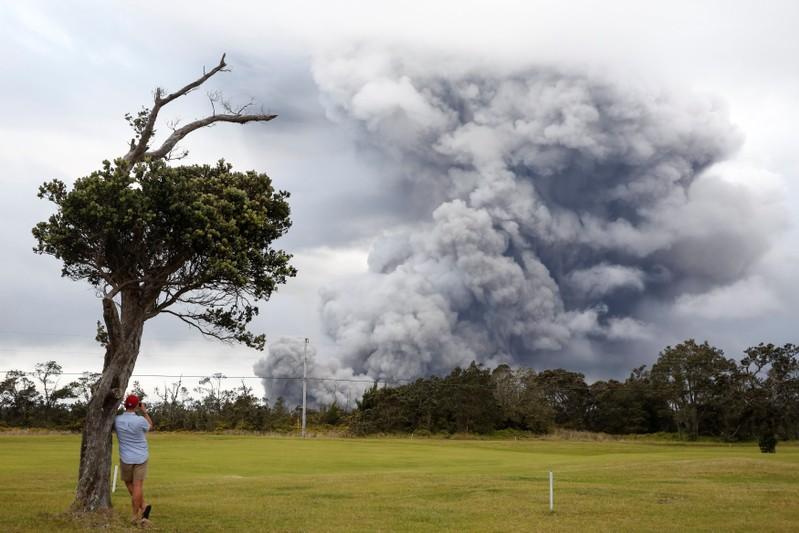 PAHOA, Hawaii (Reuters) - Smog from Hawaii's Kilauea volcano drifted north up the island chain on Wednesday and communities south of its summit were warned of up to a quarter-inch (0.6 cm) of ashfall as the nearly two-week eruption showed no sign of easing.

Rockfalls and explosions in Kilauea's crater sent ash and smoke spewing thousands of feet above the volcano, sparking an aviation red alert. A change in prevailing winds blew the volcanic smog, or vog, north toward the next island, Maui.

On the Big Island, ash fell on southern communities, such as Pahala, 18 miles (29 km) south of the summit, with cars heading from the area covered in the gray powder.

Ash is a new hazard for Hawaii's Big Island, already grappling with volcanic gas and lava that has destroyed 37 homes and other structures and forced the evacuation of about 2,000 residents from communities in the southeast Puna district.

Volcanic smog, which can cause irritation to eyes and airways, has till now mainly blown southwest out to the ocean or caused pollution in Big Island cities like Kona on the west coast.

“The Big Island is going to have a lot of vog today and maybe Maui,” said National Weather Service meteorologist Matt Foster. "By Thursday, we should have the tradewinds building back in and it will again push that plume over the open ocean away from the island."

Kilauea's ash cloud prompted the U.S. Geological Survey to raise the alert level for aviation to red due to risks ash could blow into aircraft routes and damage jet engines.

Ash is not poisonous but irritates the nose, eyes and airways. It can make roads slippery, clog drinking water catchment systems common on the island and cause the failure of electrical power lines in large enough quantities, said USGS chemist David Damby.

The area taking the brunt of the eruption is about 25 miles down Kilauea's eastern flank, near the village of Pahoa. Lava has burst from 21 giant ground cracks or fissures and torn through housing developments and farmland, threatening two highways that are exit routes for coastal areas.

Several fissures shot lava into the air on Wednesday but the flow from number 17 had not advanced any further toward coastal Highway 137, which remains around a mile distant, County of Hawaii Civil Defense said in a statement.

A looming menace remains the risk of an "explosive eruption" of Kilauea, an event last seen in 1924. Pent-up steam could drive a 20,000-foot (6,100-meter) ash plume out of the crater and scatter debris, including rocks the size of refrigerators, over 12 miles, the USGS said.