By Monica Machicao LA PAZ (Reuters) - Bolivia's government has been rocked by the novel coronavirus, with the president and at least seven of her Cabinet ministers testing positive, straining the interim leadership and casting a shadow over a slated election rerun in under two months. Conservative caretaker President Jeanine Anez, who is also a candidate in the planned Sept 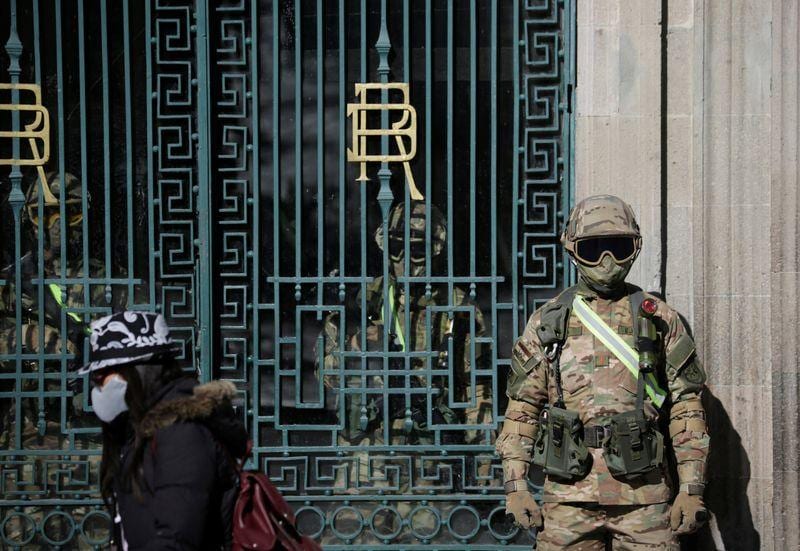 LA PAZ (Reuters) - Bolivia's government has been rocked by the novel coronavirus, with the president and at least seven of her Cabinet ministers testing positive, straining the interim leadership and casting a shadow over a slated election rerun in under two months.

Conservative caretaker President Jeanine Anez, who is also a candidate in the planned Sept. 6 ballot, tested positive for the virus last week, though she said she was doing well and would continue to work from isolation.

The ministers for economy, foreign affairs, mining, health, hydrocarbons and the presidency are also infected, the most recent confirmed on Tuesday. Others include Senate leader Eva Copa, who has said she was stable, and dozens of junior officials.

"I am afraid to be here, my body trembles because the contagion is circulating everywhere," Sergio Choque, the leader of the Chamber of Deputies, told lawmakers on Tuesday, adding that he had tested negative, "thank God."

"I feel sorry for each one of you who are risking your life today and the days before."

Latin America has become the epicenter for the virus with around a quarter of global cases and deaths despite only having around 8% of the world's population. Cases and fatalities are still rising fast.

In Bolivia, confirmed cases have topped 50,000, with the lowland city of Santa Cruz the hardest hit. The death toll stands near 1,900.

The spread of the virus through Bolivia's government has rekindled questions about the coming election, a delayed rerun of a fraught poll last year which sparked widespread protests and led to the resignation of long-term leftist leader Evo Morales.

Anez took power in a political vacuum, pledging to hold quick new elections to help calm deadly clashes that had broken out around the country. She later said she would run herself, sparking criticism after she had previously ruled herself out.

The spike in coronavirus cases in Bolivia, a landlocked nation of some 11.5 million people, has overwhelmed some hospitals, sparked protests from medical workers and, in one case in the city of Cochabamba, seen a body left lying in the street.

"We must postpone the elections," former President and rival candidate Jorge "Tuto" Quiroga said in a video statement, adding that a delay was needed to ensure voter participation and avoid contagion.

Morales' Movement for Socialism (MAS) party, whose candidate Luis Arce leads in opinion polls, wants the vote to go ahead, while the electoral tribunal has stuck by plans for a September election.

Bolivians themselves had mixed views on election plans.

La Paz resident Alejo Calle said that while people needed to be careful, it was important to take part in the elections and that he'd seen other countries move ahead with votes.

"I do not agree with going to vote in the election because of the pandemic," said Aracely Quiroz, also from the highland city. "Now it is more dangerous than before, now there are more infections than at the beginning."