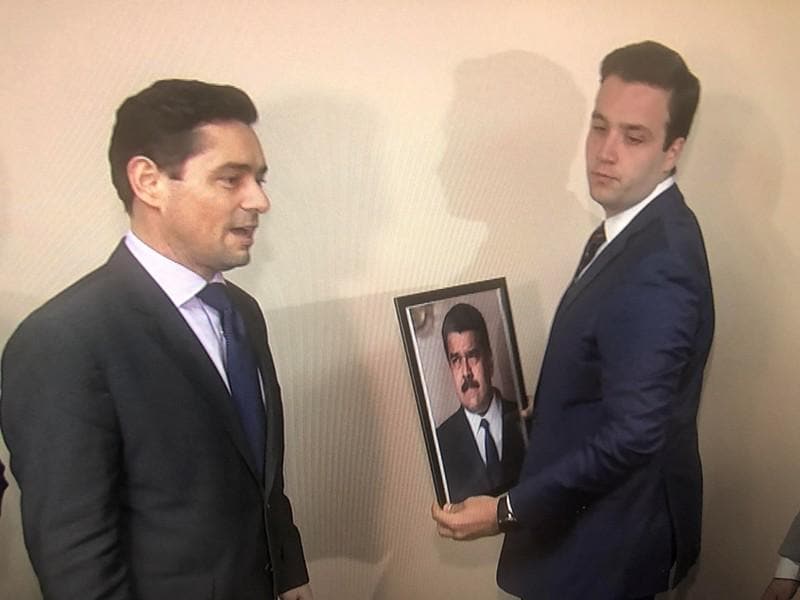 The moves come after Guaido, the president of the opposition-controlled National Assembly, invoked the constitution to assume an interim presidency in January, arguing that Maduro's May 2018 re-election was illegitimate. He has been recognised as Venezuela's rightful leader by most Western countries, including the United States.

"We are taking these steps in order to preserve the assets of the Venezuelans here in this country," Vecchio said from one of the buildings, the office of Venezuela's military attache to Washington, after removing a portrait of Maduro from the wall and replacing it with one of Guaido.

In a statement, Venezuela's foreign ministry called on U.S. authorities to "take the necessary measures to immediately reverse this forcible occupation" of its diplomatic offices. It said the transfer of possession violated international law on the protection of diplomatic properties.

Maduro, who has branded Guaido a U.S. puppet seeking to oust him in a coup, broke off relations with Washington after it recognised Guaido, calling diplomatic and consular staff back to Caracas.

Of 55 staff members, 12 decided to remain in the United States and support Guaido, Vecchio said on Monday. He added that his staff would work out of the attache building, which is located in the upscale Kalorama neighbourhood and has an assessed value of $2.2 million, according to Washington property records.

Vecchio spoke alongside Colonel Jose Luis Silva, Venezuela's military attache to Washington who recognised Guaido on Jan. 27. Few other high-ranking members of the military have heeded Guaido's call to break with Maduro, who retains the support of the armed forces and control of state functions.

On Monday, two sources familiar with the matter told Reuters an army general has defected and fled to Colombia. Vecchio said he was confident that Venezuela, which is undergoing an economic and humanitarian crisis, was in "an irreversible process of change" but that "it won't come easily."

The United States withdrew all its remaining diplomatic personnel in Venezuela last week.