By Luc Cohen CARACAS (Reuters) - A proposal to modify U.S. 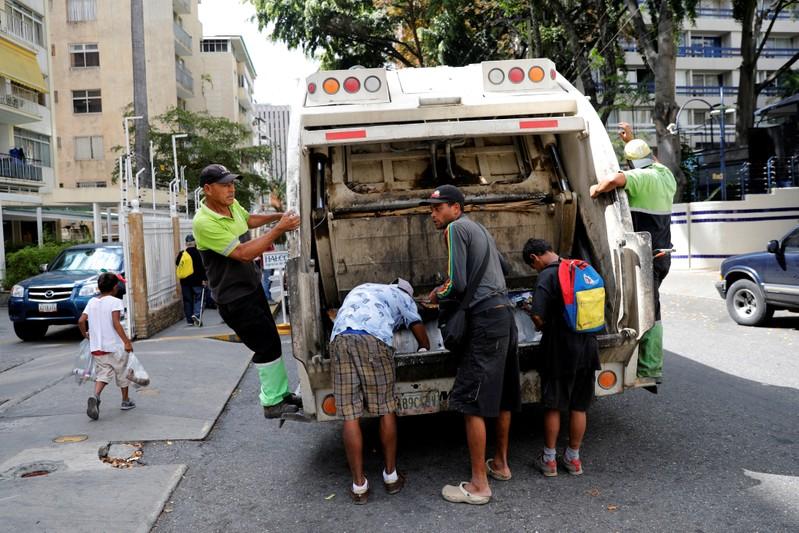 CARACAS (Reuters) - A proposal to modify U.S. oil sanctions on Venezuela to allow crude exports to be bartered for food has divided the country's opposition between those who say the move would stave off famine and those who predict President Nicolas Maduro would abuse it.

Henri Falcon, the former governor of western Lara state, said Thursday he wrote the United Nations and the U.S. House of Representatives Committee on Foreign Affairs requesting such an exemption for food and medicine imports.

Falcon attained international prominence last year when he broke a boycott to challenge Maduro in a vote many opposition parties deemed a sham. He faces an uphill battle to convince the United States and other opposition politicians of the merits of the programme.

The U.N. implemented a similar programme in Iraq, another oil-dependent economy, from 1996 to 2003 to help citizens cope with U.N. sanctions after former leader Saddam Hussein invaded Kuwait in 1990.

Through early 2019, the United States was Venezuela's largest crude importer. State oil company PDVSA [PDVSA.UL] got cash from the oil it sent to U.S. refiners, while it used exports to other major customers like China's CNPC and Russia's Rosneft to pay off debt.

But since the Treasury Department sanctioned PDVSA as part of the Trump administration's bid to pressure Maduro to step down amid a hyperinflationary economic collapse, PDVSA's shipments to the United States have disappeared, and Venezuela's crude production has fallen to around half last year's levels.

That has reduced the government revenue available to import food and medicine, in short supply for years. Defenders of the sanctions argue that any oil sale proceeds are more likely to be embezzled than used to import humanitarian goods.

Maduro remains in power despite the sanctions and a six-month long campaign by Juan Guaido, the president of the opposition-controlled National Assembly, to get the South American country's armed forces on his side.

"While politicians are seeking to distract attention exclusively, in some cases, towards the political element - but without results, without effect - people are still dying of hunger," Falcon said in a news conference, arguing that Venezuela was "at the doors of a famine."

But Guaido's allies argue the best way to resolve the humanitarian crisis that has prompted more than 4 million to emigrate is to focus on ousting Maduro.

Maduro long rejected offers of humanitarian aid, and recent shipments he has allowed from the Red Cross have not been enough and have been subject to insufficient controls, said Manuela Bolivar, a lawmaker from Guaido's Popular Will party.

"This programme would not guarantee that the people would receive food because you have a structure of incentives to steal," Bolivar said in a telephone interview.

The U.S. Treasury on Thursday sanctioned 10 people and 13 groups involved in a food distribution programme that it said lined the pockets of Maduro and his family.

Venezuela's Information Ministry did not respond to a request for comment on the proposal. The government blames a U.S. "blockade" for its economic woes, though no U.S. sanctions prevent food and medicine imports.

A senior Trump administration official said Iraq's programme was plagued by "enormous corruption" and called the proposal "not viable" in Venezuela. A U.N. investigation found that companies paid $1.8 billion in kickbacks to Iraqi officials for supply contracts.

Still, Falcon's Progressive Advance party has taken steps to make its case in Washington. Francisco Rodriguez, chief economist at New York-based Torino Economics and an adviser to Falcon's 2018 campaign, spoke in favour of an oil-for-food programme in front of a bipartisan congressional commission this week.

The party has retained Canadian lobbying firm Dickens & Madson to promote its efforts, according to a July 18 filing with the U.S. Department of Justice.

Falcon on Thursday called that filing "false" and said it had been filed due to an administrative error. He added that authorities would ensure that the programme would not be plagued by corruption like Iraq's.