US travel ban: North Korea official says Pyongyang 'does not care', tourism will not be affected

Pyongyang: Washington's ban on US citizens travelling to North Korea will have no effect on the country's tourism industry and Pyongyang does not care about it "at all", a senior development official insisted Tuesday.

The measure is due to be enacted this week and once it goes into force US passports will no longer be valid for travel to the isolated country, which is subject to multiple sets of United Nations sanctions over its nuclear and missile programmes.

Around 5,000 Western tourists visit the North each year, tour companies say, with Americans numbering about 20 percent of them. Standard one-week trips cost about $2,000. 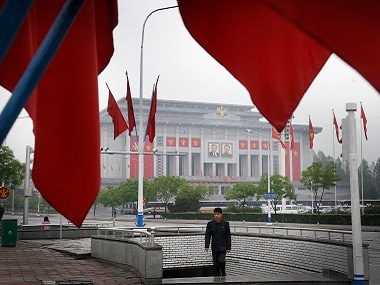 But Han Chol-Su, Vice-Director of the Wonsan Zone Development Corporation, denied that the loss of business would have any impact.

"If the US government says Americans cannot come to this country, we don't care a bit," he told AFP in Pyongyang.

Washington announced the move after the death of Otto Warmbier, the University of Virginia student who was sentenced to 15 years' hard labour in the North for trying to steal a propaganda poster.

Warmbier was sent home in a mysterious coma last month — Pyongyang said he had contracted botulism — and died soon afterwards, prompting US President Donald Trump to denounce the "brutal regime".

The State Department has long warned its citizens against travelling to North Korea, telling them they are "at serious risk of arrest and long-term detention under North Korea's system of law enforcement", which "imposes unduly harsh sentences for actions that would not be considered crimes in the United States".

Han's organisation is trying to promote the Wonsan-Mount Kumgang International Tourist Zone, a grandiose vision of a tourism hub on the east coast.

He said Washington's move was politically motivated. "The US has been continuing with sanctions against us but we don't care at all," he said.

Pyongyang officials consistently say that sanctions against their country have no effect on it.

But according to tour companies business has already been hit hard by recent developments, including tensions over the North's weapons programmes, with Trump administration officials warning that military action was an option on the table.

"Certainly, of all the dramas that have gone on lately, the Warmbier issue is the biggest one for tourism," said Simon Cockerell, general manager of market leader Koryo Tours which has seen bookings fall 50 percent. "It's depressed the market quite considerably."

The US decision, he said, would hit North Koreans working in the tourist sector, and wipe out "any possibility of a humanising human element between those two sides who demonise each other so much".

Matt Kulesza, of Young Pioneer Tours — the company which brought Warmbier to the country — said the ban's effect on the North would be "absolutely nothing".

But Americans, he added, would lose "the freedom to travel to DPRK (North Korea) and experience the DPRK for themselves".

A promotional video for Han's project takes in beach resorts, the Masikryong skiing centre, and Mount Kumgang, renowned throughout the peninsula for its beauty.

It shows the port of Wonsan transformed into a mass of gleaming towers, shopping, entertainment and trade districts, served by multiple transport links including a dual carriageway with four lanes in each direction — a far cry from the bumpy potholed road with unlit tunnels that currently links it to Pyongyang.

Air routes from China, Russia and Japan are also displayed, but no regular international flights have so far been scheduled to Wonsan's newly-built airport.

In 2015, said Han's colleague Ri Kyong-Chol, there had been negotiations to start direct flights to Beijing and Shanghai. But "since then, because of political circumstances, the participants of the other side balked".

The vast majority of foreign tourists to North Korea are Chinese.

Han was unable to put a cost on the scheme. Foreign investment would be welcome, but so far none had been forthcoming due to US sanctions, he said.

Hundreds of thousands of South Koreans used to visit Mount Kumgang every year, travelling to a Seoul-funded tourist resort that was the first major inter-Korean cooperation project.

But that came to an abrupt end in 2008 when a North Korean soldier shot dead a South Korean tourist who strayed off the approved path and Seoul suspended the trips.

New South Korean president Moon Jae-In favours engagement with the North to bring it to the negotiating table as well as sanctions.

In a five-year plan unveiled last week, his government said it would move to resume tours to Mount Kumgang and re-open the shuttered Kaesong Joint Industrial Zone, where South Korean firms employed tens of thousands of North Korean workers, "when conditions are ripe".

But the North's tourism development plan did not factor in visitors from the other side of the divided peninsula, Han said.

"We don't need to think of them.North and South should cooperate among themselves but because of US sanctions, this is not being done. Southern authorities have no intention to do so either," he said.