Washington: On Friday, the US said it is looking forward to a "smooth" political transition in Pakistan as Prime Minister Nawaz Sharif stepped down after the Supreme Court disqualified him for dishonesty over the Panama Papers scandal.

"We look forward to a smooth transition as Pakistan's parliament selects the next prime minister,” a State Department official said when asked about the disqualification of Sharif for dishonesty. 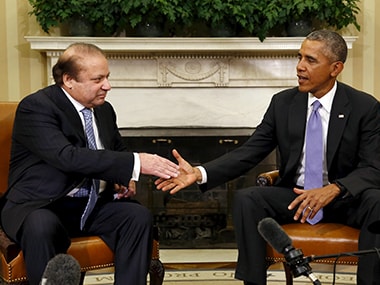 A file photo of Nawaz Sharif and Barack Obama. Reuters

The official, however, described Sharif's resignation as Pakistan's internal matter.

Sharif's resignation comes at a time when Pakistan's relations with the US is under strain after the Trump administration blocked $350 million coalition support funds the the country for failing to act against the dreaded Haqqani terror network.

Pakistan-based Haqqani network is blamed for a number of high-profile attacks on US and Western interests in war-torn Afghanistan.

It is the third time that the 67-year-old veteran politician's term as premier has been cut short.

The much-awaited verdict plunged Pakistan into a political crisis at a time when the country is facing a brittle economy and a surge in militancy.

The court disqualified Sharif under Article 62 and 63 of Pakistan's Constitution.

The articles state that a member of Parliament should be "truthful" and "righteous".

Though there was no official announcement, Geo News reported that after a consultative session of the PML-N, Shehbaz Sharif has emerged as the most likely candidate to be the next Prime Minister of Pakistan after an interim premier has served a 45-day period.