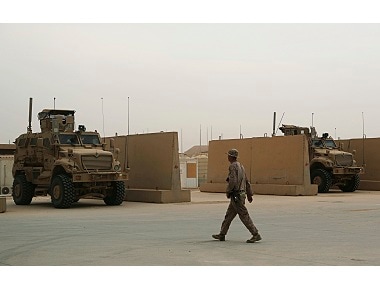 US-Iran Tensions Updates: Iranian Supreme Leader Ayatollah Ali Khamenei in an address to the nation said "we slapped them (Americans) on the face last night" with a missile strike “but military action is not enough.”

He spoke hours after the strike at military bases in Iraq used by US forces. The strike was in retaliation for the US killing of Iran's top military commander in Baghdad.

Hamid Baeidinejad, Iran's ambassador to the United Kingdom, on Wednesday affirmed that the nation's attack on Iraqi military base targeting US troops was conducted in self defence.

He further warned the United States against any "adventurism" or their armed forces would "forcefully" respond.

Oil prices have risen after two bases hosting US troops in Iraq were hit by ballistic missiles. Brent crude was up by 1.4% at $69.21 per barrel in the middle of the Asian trade, easing back from earlier gains.

Iranian news network Press TV reported that at least 80 "American terrorists" were killed on Wednesday in attacks involving 15 missiles Tehran launched on US targets in Iraq. However, Press TV could not verify the reports on the number of casualties.

In view of the latest missile attack on Iraqi military bases on Wednesday, the Ministry of External Affairs issued a travel advisory to Indians, asking them to avoid all non-essential travel to the country until further notification.

"Our Embassy in Baghdad and Consulate in Erbil will continue to function normally to provide all services to Indians residing in Iraq," Kumar said.

President Donald Trump insisted "All is well!" on Tuesday after Iran fired surface-to-surface missiles at two Iraqi bases housing US troops. He promised to make a statement to the nation on Wednesday morning about the increasingly precarious situation with Iran.

Trump offered no immediate indication of whether he would retaliate, and stayed out of sight Tuesday night as news of the missile strikes emerged.

But he tweeted that an assessment of casualties and damages was under way. The initial outlook, he said, was "So far, so good!"

All is well! Missiles launched from Iran at two military bases located in Iraq. Assessment of casualties & damages taking place now. So far, so good! We have the most powerful and well equipped military anywhere in the world, by far! I will be making a statement tomorrow morning.

The Iranian missiles came in retaliation for an American drone strike that killed top Iranian General Qassem Soleimani. Trump and his advisers are under pressure to disclose more details about the intelligence that led to the US strike.

Trump said Tuesday that his decision saved American lives and that members of Congress will get a briefing on the reasons for the US attack.

"They were planning something," he said of the Iranians.

Hours later, Iran struck back, firing the missiles at bases housing US troops and warning the United States and its allies in the region not to retaliate. The White House said the president was monitoring the situation closely and consulting with his national security team.

So far, Trump and top national security officials have justified the airstrike with general statements about the threat posted by Soleimani, who commanded proxy forces outside Iran and was responsible for the deaths of American troops in Iraq. But the details have been scarce.

"He's no longer a monster. He's dead," Trump said, adding, "And that's a good thing for a lot of countries. He was planning a very big attack and a very bad attack for us and other people and we stopped him and I don't think anybody can complain about it."

Soleimani was targeted while he was at an airport in Baghdad with Abu Mahdi al-Muhandis, a veteran Iraqi militant who also was killed.

Trump said they weren't in Baghdad to discuss vacation plans or a visit to a "nice resort but, were there to talk over bad business."

The lack of detail doesn't sit well with Democrats, who recall how President George W Bush justified his invasion of Iraq by accusing Saddam Hussein of having non-existent weapons of mass destruction. Lawmakers in recent days have been pressing for more detail to explain why Trump ordered the killing — a decision that previous administrations passed up because of fears it would unleash even more violence.

Soleimani traveled frequently and relatively openly, with visits to Baghdad more frequent in recent months. He also often showed up in Syria, including along the border between Iraq and Syria.

Senate Minority Leader Chuck Schumer and Senator Bob Menendez, the top Democrat on the Senate Foreign Relations Committee, have called on Trump to declassify the written notification he sent to Congress after the strike. The notification was required under the War Powers Resolution Act of 1973, which requires the president to report to Congress when American forces are sent into hostile situations.

"The president must come to Congress and present clear and compelling intelligence as to why the strike against Soleimani was absolutely necessary," Menendez said in a speech on the Senate floor.

"In the wake of all its misleading statements we must make clear to the administration that the president by himself does not have the authority to launch a war against Iran."

Trump stressed that the strike was in retaliation for Iranian attacks and that the US is prepared to attack again — "very strongly". He also said that while he eventually wants to pull US troops out of Iraq, now is not the time because it would allow Iran to gain a bigger foothold there.

"We had deep intelligence indicating there was active plotting to put American lives at risk," and Iraqi lives too, said Secretary of State Mike Pompeo.

Asked if the threat was imminent in days or weeks, Defense Secretary Mark Esper said: "I think it’s more fair to say days, for sure."

Esper said the intelligence was precise — "razor thin". He said top Republicans and Democrats in the House and Senate plus the chairmen and vice chairmen of the intelligence committees in both chambers were getting a classified briefing Tuesday afternoon on what led to the decision to kill Soleimani. He said other lawmakers will be provided general details about the attack.

He said Soleimani was in Baghdad to coordinate additional attacks against the US "To somehow suggest that he wasn’t a legitimate target, I think, is fanciful," Esper said.

Democratic lawmakers are not yet convinced it was the right decision.

Senator Dianne Feinstein, D-Calif., called the US strike on Soleimani a mistake and said "I have yet to see how killing this man will prevent Iran from posing an even greater threat against the United States and our interests."

In the wake of the killing, Iran has announced that it will no longer be bound by the 2015 nuclear agreement and vowed to retaliate against the US, its allies and American interests. Iraq's parliament also voted to expel US troops from Iraq, which would undermine efforts to fight Islamic State militants in the region and strengthen Iran's influence in the Mideast.