Los Angeles: The terror assaults in France have cast a shadow over the Regional Pravasi Bharatiya Divas in Los Angeles with External Affairs Minister Sushma Swaraj, who was on her way to the US to inaugurate the event, returning to India from mid-way in the wake of the attacks.

The Regional Pravasi Bharatiya Divas kicked off on Saturday with hundreds of attendees honouring the victims of the horrific attacks with a minute's silence. 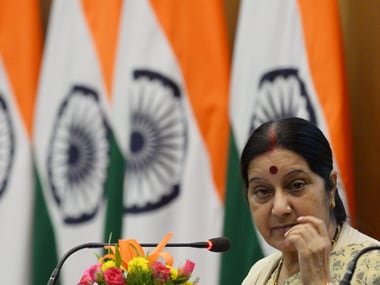 Swaraj, who was on her way to the US, returned to New Delhi from mid-way in view of the Paris terror attacks.

Officials in New Delhi said Swaraj, who had a transit halt at Dubai on her way to the US, came back from there itself after hearing about the attacks in Paris that claimed over 120 lives.

Gen (rtd) V K Singh, the Minister of State for External Affairs, is now expected to attend the two-day event.

As the nearly 1,000 Indian-Americans attending the two-day event in Los Angeles mourned the loss of lives in the Paris terror attacks, top American lawmaker from California Brad Sherman said the attack in the French capital had all the hallmarks of the Mumbai terror attack that was launched in November 2008 by Lashkar-e-Taiba with the support of the Pakistani Army and its intelligence agencies.

"Today we should take a moment to reflect the attacks in Paris, New York, Iraq... and Mumbai. The Paris attack is based on model of the Mumbai terrorist attack," said Sherman, a former Chairman of the House Foreign Affairs Sub-committee on Terrorism.

The Paris and Mumbai attacks have shown how a small group of people can create havoc in a city.

"Attack on Mumbai was supported by LeT, Pakistan Army and its intelligence agency. The planning for this took several years," he said adding that now ISIS has adopted the Mumbai model in Paris.

"We have to stand up to terrorism to say enough is enough," Sherman said.

In his address at the event, Indian Ambassador to the US Arun K Singh said there is an increasing desire among the Indian-Americans to connect with India.

Among the Indian diaspora, there is consciousness about the growing opportunities in India, he said.

Referring to the steps taken by the Narendra Modi-led government in the last 18 months, the Ambassador said with the changes happening in India there are growing opportunities in the country.

In the first six months of this year, India received the maximum FDI. India also topped the degree of confidence index this year, he said .

Indian-Americans, Singh said, have been contributing a lot to the development of both India and the United States.

At the event, Kali P Chaudhuri, Chairman and Founder of the KPC Group of Companies, was presented with the NRI of the Year Award.

Anil K Agarwal, Secretary in the Ministry of Overseas Indian Affairs, said the Indian Diaspora is making a very important contribution to the India-US relationship.

Noting that somewhere deep in the heart of the Indian-Americans there is desire to make India a country of opportunities as is this country, he said, "We in Ministry our task to provide you with a platform to fulfil this desire of yours."

Los Angeles is only the second US city to host the Regional Pravasi Bharatiya Divas (RPBD), after New York.

The Overseas Indian Facilitation Centre (OIFC) of the Confederation of Indian Industry also organised an Indian Diaspora Business Meet on the sidelines of the Regional Pravasi Bharatiya Divas.

The inaugural event was followed by a cultural extravaganza.