Unknown but undeterred, lead EU candidates take to the road

By Robin Emmott and Alissa de Carbonnel MALAGA/DUBLIN/BUDAPEST (Reuters) - A convoy of black Mercedes pulled up at the 'Bar El Gusto' near Malaga, disturbing the peace of European pensioners sitting in beachwear, and a man in a dark suit and tie stepped onto the terrace. German politician Manfred Weber, the top conservative candidate in next week's European Parliament elections, had come to Spain's Costa del Sol as part of campaigning for the May 23-26 poll, undaunted by his lack of star power. 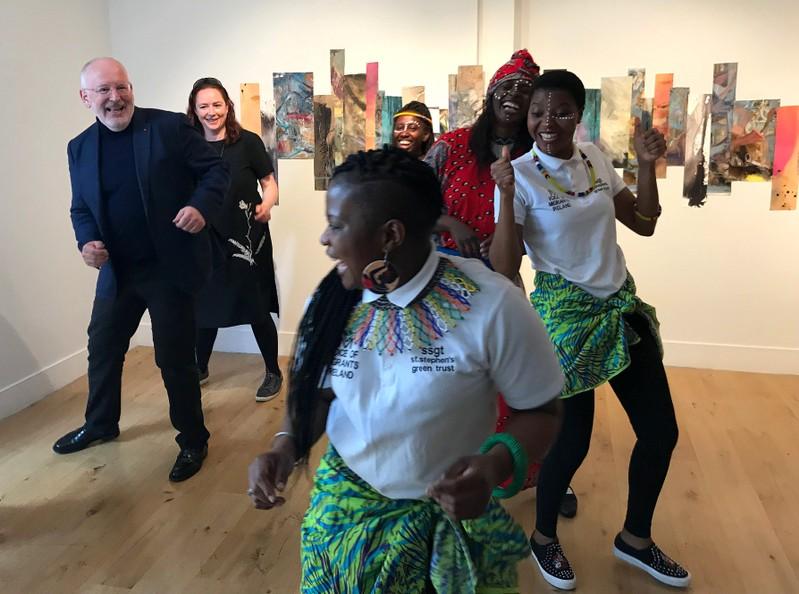 MALAGA/DUBLIN/BUDAPEST (Reuters) - A convoy of black Mercedes pulled up at the 'Bar El Gusto' near Malaga, disturbing the peace of European pensioners sitting in beachwear, and a man in a dark suit and tie stepped onto the terrace.

German politician Manfred Weber, the top conservative candidate in next week's European Parliament elections, had come to Spain's Costa del Sol as part of campaigning for the May 23-26 poll, undaunted by his lack of star power.

"He certainly looks important," said Maartje Martens, 73, a Belgian retiree sitting at the bar, who had not heard of Weber.

For the first time in five decades of these elections, Weber and his rivals are trying to create a buzz about EU policies touching the lives of 427 million voters who have gradually lost interest, with voter turnout steadily falling.

"To be a winner in today's globalised world, our only chance is together as Europeans," Weber, running for the centre-right European People's Party (EPP), told a group of British, Belgian and German expatriates near Malaga.

Despite being the world's second-biggest democratic election, the poll for the 751 seats in the parliament is essentially a collection of 28 national votes where individual parties and their candidates campaign on local issues.

The EU, the world's largest trading bloc, has no significant pan-European media, political parties or true body politic and has not moved beyond national democracies. The European project is regularly criticised for being distant from citizens.

"What you are doing on a daily basis in the European Parliament is lawmaking and that is always of course tedious, technical, legalistic, but behind it there is always political messaging," Bas Eickhout, a lead candidate for the Greens, told Reuters as he campaigned in the Hungarian capital Budapest.

Europeans can only vote for people in the country they live in or are from. Despite support from French President Emmanuel Macron and others, the idea of pan-European seats is opposed by many. So Europe-wide campaigning is of marginal significance. Only Germans can vote for Weber, the Dutch for Eickhout.

Yet the 2009-2012 euro zone crisis, Britain's 2016 decision to quit the bloc, the rise of populist anti-establishment parties and global issues such as climate change, which are too great for a single EU state to deal with, do appear to have spurred an urgency among pro-European groups.

Weber's Socialist rival Frans Timmermans calls the 2019 election a litmus test: "Are we able to show that we understand local issues and the link with Europe?" he told Reuters during a stop in Dublin as part of a European odyssey he has dubbed the 'Tour de Frans'.

Political "families" such as the EPP, the Green Party and the Socialists also want their top candidate to have a shot at being elected as the European Union's next chief executive, as "Spitzenkandidat", or German for lead candidate.

While an attempt was made in the last elections in 2014 to generate a more pan-European campaigning process, lawmakers say it was last-minute, largely ignored by the media and involved just a few ad-hoc campaign events outside Brussels.

This time round, liberals, Greens, conservatives and Socialists are trying something more akin to a U.S.-style presidential campaign, hiring planes, printing campaign T-shirts, going to canvass for votes, talking on radio shows across Europe and participating in televised debates.

Still, obstacles to cross-border efforts are enormous, starting with the physical fatigue of travelling to cities and towns across 28 countries over just a few weeks.

After dawn early this month, Timmermans stepped into his black Mercedes in Dublin after taking three different commercial flights from an EU summit in Sibiu, Romania, the night before. Later that day he went on to Hanover and then to Porto.

During Timmermans' seven-hour campaign stop in Ireland, his day included canvassing for votes at Maynooth railway station outside of Dublin, dancing with African immigrants at a community centre in the seaside town of Bray and having tea with retirees at a new housing complex in Dublin.

Reaching voters can prove difficult too.

"I didn't even know the elections were on," said a woman in Maynooth who gave her name as Louise as she rushed through the station ticket barrier. She had never heard of Timmermans despite his being well-known in the Netherlands, where he used to be foreign minister before his current job as deputy head of the European Commission, the EU's executive in Brussels.

"But I'll probably be voting in the elections now," she said as a member of Timmermans' team thrust a leaflet into her hand.

Eickhout, 42, spent a day in Budapest in early May to lend his support to the embattled Green party there, hoping to win one seat in the new EU legislature.

"It's important to show ... we are not alone here," said Gabor Vago, who heads the small opposition LMP party's list.

Unlike Weber, 46, and Timmermans, 58, Eickhout eschewed limousines, hopping on the metro to speak to local TV crews at an anti-nuclear rally and strolling to meet climate activists.

With no pan-European presence, lead candidates are forced to rely on their national party networks, and even linguists such as Timmermans, fluent in five EU languages, are limited by cultural barriers when away from their home countries.

But delivering his stump speech to a non-English speaking audience, Weber faced the hum of distracted chatter in the audience as Spanish-language subtitles failed to scan on screen.

Still, Weber, Timmermans and Eickhout say they take heart from discovering during their campaigns that the same issues resonate with Europeans, regardless of their nationality.

"In this campaign, wherever I go, people link their problems directly with Europe. It's jobs or housing or social security or the environment. They understand that Europe has a role in that, and that understanding has deepened," Timmermans said.