Some of the strongest remarks at the ongoing United Nations General Assembly (UNGA) came from French president Emmanuel Macron. He referred to Narendra Modi adding that the PM was right when he said that the time is not for war. AP

The all-important United Nations General Assembly (UNGA) is back to hold its first in-person gathering, after two years of pandemic-related restrictions. World leaders have convened in New York’s Manhattan for the 77th edition of UNGA, which began the first day of the high-level General Debate on Tuesday.

Heads of state, heads of government and top diplomats from across the globe are attending the session, which was opened by UN Secretary-General António Guterres. More than 150 delegates will deliver speeches as the world copes with the war in Ukraine, food shortages, and climate change.

The busiest diplomatic week of the year is underway!

See what world leaders, influencers and advocates have to say and follow the action with our special #UNGA @twitter activation.https://t.co/JVXh8caAUI

Here’s a look at who is attending the Assembly, what’s being discussed and what more can we expect.

Is the PM attending UNGA?

No Prime Minister Narendra Modi is not attending this year’s UNGA and has sent ministers as representatives instead. External Affairs Minister S Jaishankar is our representative at the event and is expected to speak at the podium on 24 September. He is taking part in more than 50 official engagements, which will include bilateral, plurilateral and multilateral meetings.

He has already met with the president of the 77th session of the UNGA Csaba Kőrösi and “discussed the criticality” of the Sustainable Development Goals agenda for global progress.

Congratulated him on his priorities for #UNGA77. Assured him of India’s fullest support.

Discussed the criticality of SDG agenda for global progress. Shared Indian experiences in that regard. pic.twitter.com/QjLonisuJQ

What will be India’s agenda at the session?

India is expected to focus on counterterrorism, peacekeeping, reformed multilateralism, climate change, and equitable access to COVID-19 vaccines, according to a report by The Indian Express.

India believes that the global agenda should focus much more on the genuine, pressing needs of the international community, which currently are energy security concerns, food security concerns, fertilizer and health concerns, debt concerns and trade disruption concerns.

The five S’s: Samman (Respect), Samvad (Dialogue), Sahyog (Cooperation), Shanti (Peace) and Samriddhi (Prosperity), laid out by PM Narendra Modi will be the “guiding light” in India’s approach to the UNGA, India’s Permanent Mission to the UN said in a video posted on Twitter.

Jaishankar will be in the United States until 28 September and is scheduled to meet Guterres in New York, PTI reported. He will also be hosting a ministerial meeting of the G4 nations — India, Japan, Germany and Brazil, according to the Ministry of External Affairs.

Additionally, Jaishanker is participating in the high-level meeting of the L.69 group, a major bloc of developing countries from Africa, Latin America, the Caribbean, Asia and the Pacific, that are focused on reforms of the UN Security Council, The Indian Express reports. The 77th session of the United Nations General Assembly at UN headquarters in New York City will see around 157 speeches from world leaders and diplomats. AFP

The Chinese president will not meet at the session even as Beijing faces pressure after the UN report on the exploitation of Uyghurs and other mostly Muslim ethnic groups in the northwestern region of Xinjiang.

Diplomats and human rights activists are pressuring the UN to act against China. “It’s deeply disheartening to see a country that has been so central to the creation of the modern UN system, and enjoys its status as a permanent member of the Security Council, so profoundly violating its commitments,” said Jeffrey Prescott, a deputy US ambassador to the UN, according to Al Jazeera.

Meanwhile, China's Foreign Minister Wang Yi is attending the General Debate at the session. He is expected to meet his Pakistani counterpart Bilawal Bhutto Zardari among others.

The #UNGA high-level week begins today. State Councilor and Foreign Minister Wang Yi has arrived in NYC and started his bilateral and multilateral activities. China's support to the UN has been solid and consistent. pic.twitter.com/aQSfg1slYv

What about Russia’s Putin?

Vladimir Putin is not going to the United States amid sanctions over the war in Ukraine. However, Russia’s invasion is dominating UNGA.

In strong remarks, French president Emmanuel Macron called Moscow’s war a return to “imperialism”. “On the 24th of February this year, Russia, a permanent member of the Security Council, through an act of aggression and invasion and annexation, broke our collective security,” It deliberately violated the UN Charter and the principle of sovereign equality of states,” he said.

Quoting Modi, Macron added that the PM was right when he said that this time was not for war. “Narendra Modi, the Prime Minister of India was right when he said the time is not for war. It is not for revenge against the West, or for opposing the West against the east. It is the time for a collective time for our sovereign equal states. To cope together with challenges we face,” he said.

Germany echoed similar sentiments. Chancellor Olaf Scholz said late on Tuesday that there was “no justification whatsoever” for Putin’s decision to invade Ukraine. “This is imperialism, plain and simple,” he said, adding that it spelt disaster not just for Europe, but also for the global, rules-based order.

Turkey president Recep Tayyip Erdogan called for Russia to return recaptured territory to Ukraine as he portrayed himself as a mediator. “We think the war will never have a triumph, and a fair peace process will not have a loser. We are always underlining the significance of diplomacy in the settlement of the dispute,” he said in his address. Erdogan touted Turkey’s role in the negotiations so far, most notably as a mediator along with the United Nations, in a deal to get grain exports out of Ukraine’s ports — what he called “one of the greatest accomplishments of the United Nations” in years, according to a report in The New York Times.

Who else will headline UNGA?

The host country usually sets the agenda for the session but some last-minute arranging needed to be done as US president Joe Biden and other world leaders had to fly to London for Queen Elizabeth II’s funeral.

Biden will give his annual address on Wednesday. He will use the international stage to try to galvanise allies at the UN to arm Ukrainian forces in an era-defining conflict against Russia, according to senior administration officials, reports CNBC. Michele Sison, assistant secretary for international organisation affairs at the US State Department, said the Biden administration did not view this year’s General Assembly “as business as usual.” “Russia’s unprovoked, ongoing assault on Ukraine raises serious questions about its commitment to diplomacy, the UN Charter and the territorial integrity of nations,” Sison told reporters over a call, according to Al Jazeera.

This is the new United Kingdom prime minister Liz Truss’ first international trip since taking office. She too will address the UN on Wednesday.

The premier will pledge at the UN summit to meet or exceed in 2023 the 2.3 billion pounds (Rs 208 lakh-crore) of military aid spent on Ukraine in 2022, doubling down on her support for Kyiv. She will also vow to help end Europe's dependence on Moscow for energy, reports Reuters.

My focus at the @UN General Assembly is to continue working with our international partners to fix the global energy crisis, support Ukraine and defend freedom and democracy around the world. #UNGA pic.twitter.com/YHt89PXBUQ

Ukraine’s Volodymyr Zelenskyy will address the gathering virtually, the only leader to do so this year. On Friday, UNGA voted to allow the president to deliver a pre-recorded address to world leaders because of his need to deal with Russia’s invasion, making an exception to its requirement that all leaders speak in person. 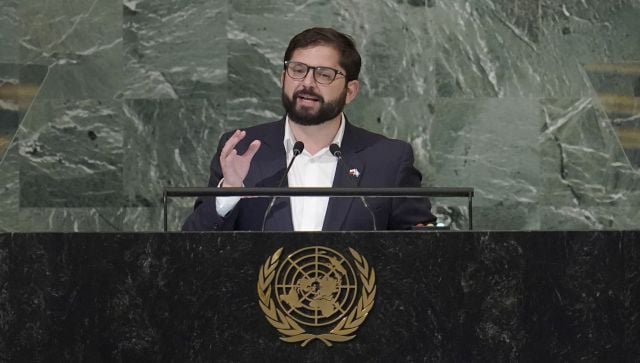 At 36, the world’s youngest leader, Chile’s president Gabriel Boric gave a passionate speech at UNGA calling for more government accountability. “I invite you all to get ahead in the search for greater social justice,” Boric said Tuesday as he made his UN debut, reports Bloomberg. “Distributing wealth and power in a better way should go hand-in-hand with sustainable growth.”

There’s a lot at stake at UNGA this year and the next few days are likely to be intense.