By Mayela Armas CARACAS (Reuters) - Venezuela's opposition says President Nicolas Maduro is seeking to close down the last institutional space they have left to contest his government - the National Assembly legislature, headed by Juan Guaido. Since Guaido invoked the constitution to assume a rival presidency in January, opposition lawmakers have been assaulted by pro-government groups at the assembly's gates, arrested and accused of treason 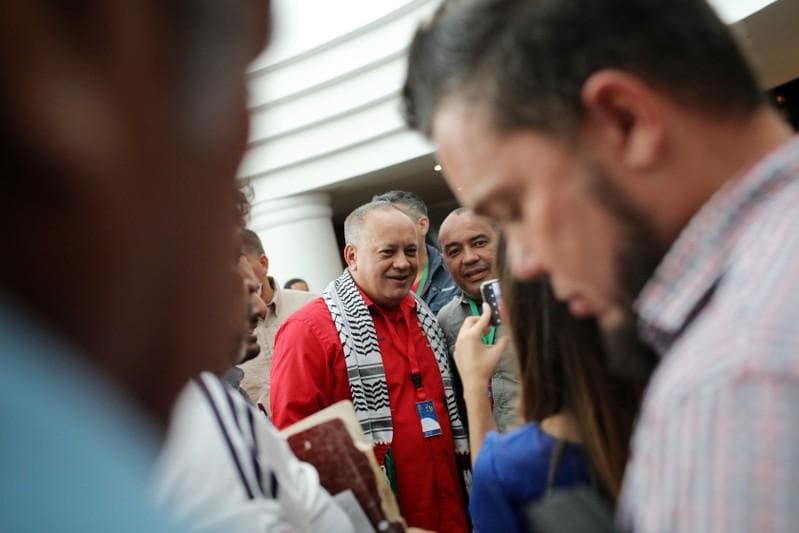 CARACAS (Reuters) - Venezuela's opposition says President Nicolas Maduro is seeking to close down the last institutional space they have left to contest his government - the National Assembly legislature, headed by Juan Guaido.

Since Guaido invoked the constitution to assume a rival presidency in January, opposition lawmakers have been assaulted by pro-government groups at the assembly's gates, arrested and accused of treason. Many say they are barely getting by financially after the Maduro administration stripped them of their salaries.

"We have done titanic work while we have a sword hanging above us," said Nora Bracho, a 47-year-old lawmaker who was physically attacked in June by a pro-government activist while defending journalists blocked from entering the assembly.

Guaido's momentum has flagged since an unsuccessful attempt at sparking a military uprising in April but the National Assembly remains at the core of his plan to oust Maduro. Its legislation has cut off the government's access to valuable foreign assets and mustered more international support.

In February, the assembly named a new board of directors to take the reins of state oil firm PDVSA's U.S. subsidiary Citgo. This month, the assembly appointed its own central bank board to protect its "international reserves," a reference to its foreign gold holdings, which the opposition wants to prevent the Maduro government from selling off.

On Tuesday, the assembly approved a law returning Venezuela to a regional defense treaty, although Guaido warned the treaty was not a "magic" solution to secure a foreign military intervention.

Most Western nations recognize Guaido as Venezuela's legitimate head of state but Maduro retains control of the state and armed forces. Guaido argues that Maduro's 2018 re-election was fraudulent, while Maduro says his rival is trying to carry out an illegal coup.

To approve measures, half of the National Assembly's 167 lawmakers must be present to reach quorum but the number is dwindling.

In 2015 parliamentary elections for the National Assembly the opposition secured 112 seats. But this year, 21 members have stopped attending due to arrests or security fears, leaving a buffer of only five lawmakers above quorum.

Since April, the pro-government Supreme Court has accused 14 opposition lawmakers of crimes including treason and conspiracy, prompting most to flee abroad or take refuge in friendly foreign embassies. Intelligence agents arrested Guaido's assembly deputy, Edgar Zambrano, in May and he remains jailed.

Jose Guerra, a member of the assembly's finance commission, left Venezuela in June when the Supreme Court stripped him of his parliamentary immunity from prosecution. The commission is now missing five of its 12 members.

"The court's actions attempt to dismantle a commission that has published statistics despite opacity and which has denounced this government's financial mismanagement," he told Reuters from exile in Washington.

In 2017, Maduro's government created a new legislative superbody called the Constituent Assembly, nominally to draw up a new constitution. The Constituent Assembly, which the opposition does not recognize as legitimate, and Supreme Court have overridden the National Assembly's decisions, limiting its oversight of public spending, debt and oil deals.

Diosdado Cabello, the Constituent Assembly head, has publicly warned the opposition that "it will never govern" and "there will not be impunity" for their actions.

To maintain quorum, the National Assembly has started to use substitute deputies, although they also worry about arrest. "The fear is there but we have a responsibility," said Guillermo Palacios, Zambrano's substitute.

Another option is the creation of a "virtual parliament" so absent deputies can still participate. The opposition also has invited lawmakers from movements allied to the Socialist Party to join meetings.

Arkiely Perfecto, who defected from the Revolutionary Tupamaro Movement in January and now opposes Maduro, said she attends the sessions "because the people asked me to raise their voice." After appearing at the assembly, intelligence agents intimidated her parents at their home, she told Reuters.

Opposition lawmakers, especially those who represent areas far from Caracas, face other obstacles. Air travel is expensive and road travel can entail shakedowns at military checkpoints and the risk of bandit attacks.

In 2016, the government suspended lawmakers' salaries of $100 a month on grounds the assembly was "in contempt" for ignoring Supreme Court rulings. Legislators say family members now support them or they rely on their own businesses.

"Sometimes I give classes or consult," said Elias Matta, who chairs the oil commission. "We have to live."