By Alastair Macdonald and Gabriela Baczynska BRUSSELS (Reuters) - British Prime Minister Theresa May said she held 'constructive' talks in Brussels on Wednesday as she sought concessions on Brexit from a sceptical European Union, her strategy further battered by the defection of three lawmakers. Looking tense, May met the head of the European Union's executive arm, Jean-Claude Juncker, on Wednesday evening 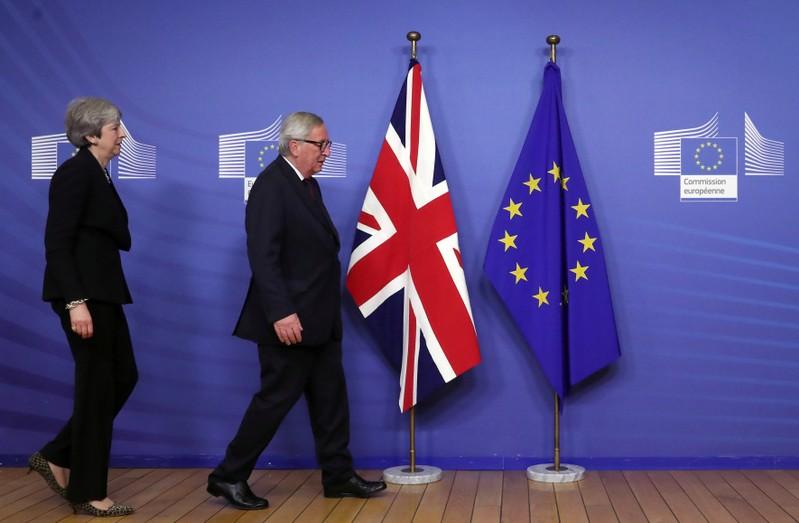 BRUSSELS (Reuters) - British Prime Minister Theresa May said she held "constructive" talks in Brussels on Wednesday as she sought concessions on Brexit from a sceptical European Union, her strategy further battered by the defection of three lawmakers.

Looking tense, May met the head of the European Union's executive arm, Jean-Claude Juncker, on Wednesday evening. He quipped to journalists minutes earlier that a band-aid visible on his cheek was not the prime minister's doing.

A little over an hour later they released a joint statement, as non-committal as one from a similar encounter two weeks ago, though this time the talks were not described as "robust" and there was some more detail on joint efforts to fix a deal so as to reassure Britain it will not be bound to EU rules forever.

Britain is due to leave the EU on March 29 but diplomats say London has less than a month to overcome the current deadlock in the British parliament and seal a deal ahead of a regular summit of EU national leaders on March 21-22.

In their joint statement, May and Juncker said talks were "constructive" and their teams would press on to "explore the options in a positive spirit". The two plan to meet again before the end of February, when May faces a new test in a parliament where her minority government just lost three supporters.

With 37 days to go to a potential chaotic Brexit, officials were "seized of the tight timescale and the historic significance of setting the EU and the UK on a path to a deep and unique future partnership", the statement said.

May said afterwards progress had been made over the backstop but added time was running out to secure changes.

Parliament last month voted down the Brexit deal May had negotiated with the bloc and she has struggled since to unlock a stalemate over the so-called backstop - an insurance policy to avoid customs controls on the Irish border.

Wednesday's announcement by three lawmakers that they were quitting May's Conservative Party over what they called the government's "disastrous handling of Brexit" compounded doubts over her ability to get any EU-UK deal approved.

"What we need to achieve is legally-binding changes which satisfy parliament that we will not be stuck in the backstop indefinitely," May's spokesman said before the meeting.

In their statement, May and Juncker said talks focused on finding a legal way to reassure lawmakers that the backstop, binding Britain to EU laws, would be "temporary".

A British source said the talks could give May momentum for more talks with EU leaders during a summit with their Arab peers in Egypt on Feb. 24-25. She could then return to parliament next week and offer lawmakers some progress before another vote.

But the EU has squarely refused London's demands to discard the backstop, saying it is essential to avoid customs controls on what would become a new EU-UK border between Ireland and Britain's historically troubled province of Northern Ireland.

The EU says setting a time limit on the backstop or giving Britain the right to abandon it unilaterally, as London demands, would make it void. It says the "alternative technological arrangements" advocated by Britain do not exist for now, like unicorns.

In a lighthearted protest against Brexit, several people awaited May's arrival for the Juncker talks dressed in pastel unicorn costumes and waving a banner reading "Stop Brexit. Save Britain." EU officials dismiss Britain's talk of "alternative arrangements" to avoid a hard border in Ireland as a hunt for the mythical unicorn -- a pointless chase after the impossible.

While some British ministers talked up chances for progress on Wednesday, the EU has been downbeat, with Juncker stressing he had no expectations of a breakthrough.

Britain's Brexit Secretary Stephen Barclay and Advocate General Geoffrey Cox were due in Brussels on Thursday and want to discuss "legal text" on the backstop with the EU's chief negotiator Michel Barnier.

May wants to win enough concessions to persuade Cox to change his legal advice that the backstop risks keeping Britain in EU's trade orbit forever.

Both Barclay and British finance minister Philip Hammond have suggested the "alternative arrangements" to the backstop that Britain is pursuing could become part of the new EU-UK relationship after Brexit, not the formal divorce treaty.

While that could mean a small step towards a compromise with the EU, frustrated EU diplomats said time was fast running out.

"They have until March 10, maybe March 15 at the latest," one EU diplomat said. "Otherwise they will be forced into a delay of Brexit, or crash out."

Many EU officials believe that, come what may, Britain will have to ask for a delay to the March 29 Brexit date, if only to give it time to pass further legislation ahead of its departure.

"It's Brexit for slow learners," said another EU diplomat.

The EU hopes that, under growing pressure of looming disruptions from a departure with no deal agreed, Britain will eventually accept assurances already offered by the bloc, repackaged in a legally-binding way and stating that the backstop would only ever be used temporarily and as a last resort.

May is keen to get some EU concessions before Feb. 27 when parliament is due to vote again on Brexit options. But the EU is wary of offering anything now to see it sink again in the divided UK parliament.

"It's too early for a breakthrough," another EU diplomat said. "The second half of March is the make-or-break moment."