By Will Russell and Hannah McKay BRISTOL, England (Reuters) - British Prime Minister Boris Johnson on Saturday criticised what he called 'disgraceful attacks' on police officers after protests against a new policing bill in the city of Bristol turned violent, resulting in 10 arrests. 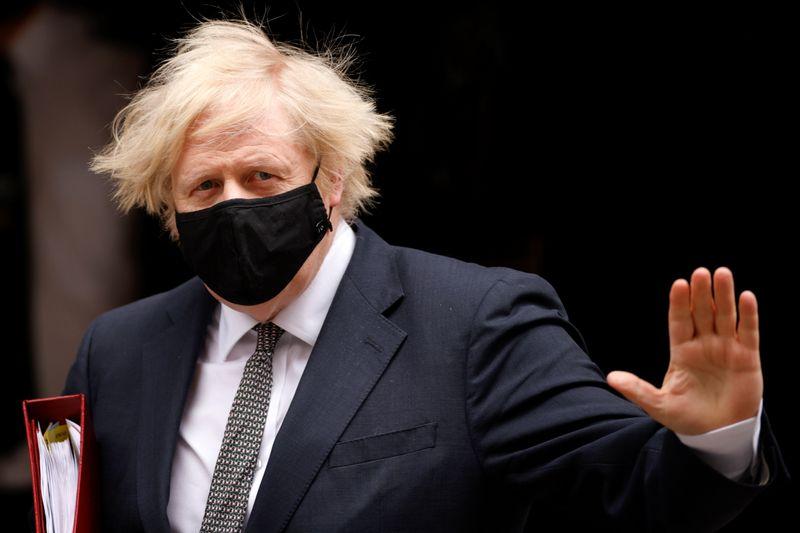 By Will Russell and Hannah McKay

BRISTOL, England (Reuters) - British Prime Minister Boris Johnson on Saturday criticised what he called "disgraceful attacks" on police officers after protests against a new policing bill in the city of Bristol turned violent, resulting in 10 arrests.

Local police said a demonstration involving more than 1,000 people on Friday afternoon had been largely peaceful, but a minority had shown hostility to police later in the evening.

"Last night saw disgraceful attacks against police officers in Bristol. Our officers should not have to face having bricks, bottles and fireworks being thrown at them by a mob intent on violence and causing damage to property," Johnson tweeted.

"The police and the city have my full support."

Police in riot gear had beaten back crowds of protesters with shields and batons.

Large demonstrations are not allowed due to coronavirus restrictions, and police have urged people not to attend even peaceful protests.

On Saturday, a peaceful demonstration against the policing bill in Manchester - where protesters lay down on tram tracks - was ended by police, who made 18 arrests, citing disruption to the transport network.

But Bristol has seen the most dramatic protests. Last Sunday, two police officers were seriously injured and at least two police vehicles set on fire in the city after a peaceful protest turned violent.

The Police, Crime, Sentencing and Courts bill would give police new powers to impose time and noise limits on street protests.

That has angered activists, and scrutiny of police tactics has increased since a heavy-handed response to a London vigil for murder victim Sarah Everard.

Matthew Dresch, a journalist for the Daily Mirror newspaper, on Friday filmed a policeman hitting him as he shouted "What are you doing? I'm press".

In a tweet accompanying the video, Dresch said: "Police assaulted me at the Bristol protest even though I told them I was from the press. I was respectfully observing what was happening and posed no threat to any of the officers."

Police said they were aware of the video and were trying to contact the journalist.

(Reporting by Hannah McKay, Will Russell and Ben Makori in Bristol and Phil Noble in Manchester; Writing by Alistair Smout; Editing by David Holmes and Kevin Liffey)