By Gleb Garanich and Serhiy Takhmazov NOVOLUHANSKE, Ukraine (Reuters) - Ukrainian President Petro Poroshenko thought he could rely for his re-election in part on the votes of soldiers who have spent years fighting pro-Russian separatists. But a visit to the frontline found low morale and little enthusiasm for him. Such views go some way to explaining why Poroshenko's attempt is faltering to cast himself as the defender of Ukraine against what he calls Russian aggression. 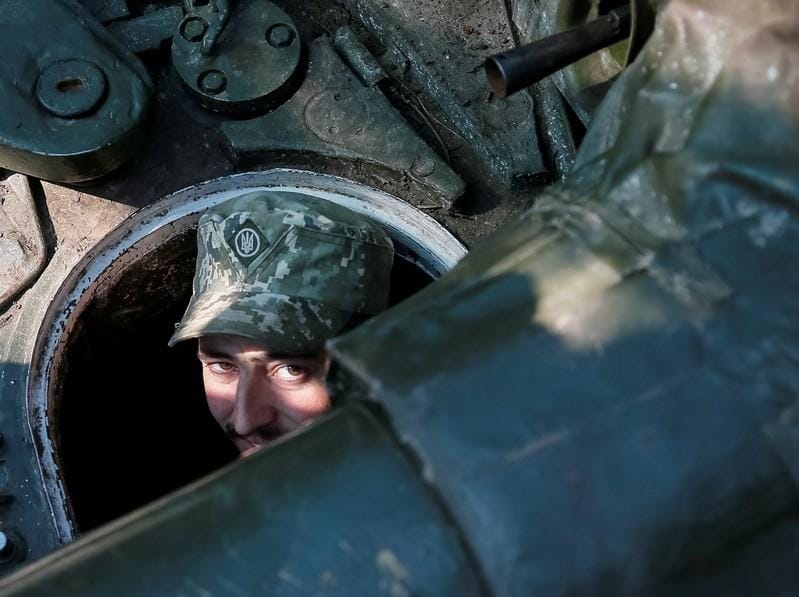 By Gleb Garanich and Serhiy Takhmazov

NOVOLUHANSKE, Ukraine (Reuters) - Ukrainian President Petro Poroshenko thought he could rely for his re-election in part on the votes of soldiers who have spent years fighting pro-Russian separatists. But a visit to the frontline found low morale and little enthusiasm for him.

Such views go some way to explaining why Poroshenko's attempt is faltering to cast himself as the defender of Ukraine against what he calls Russian aggression.

Polls show Poroshenko is on course to lose in a second round landslide on Sunday to Volodomyr Zelenskiy, a comedian who plays a president on a TV show and who led convincingly in a first round on March 31.

Poroshenko, who placed a distant second overall among 39 candidates in the first round, beat Zelenskiy among soldiers stationed at the front, but only barely: by less than 200 votes in the Donetsk region and just 55 votes in neighbouring Luhansk.

Such a tight race among the troops was a setback for a president who often shows up at the front line in combat fatigues and promised to rebuild the armed forces.

"If there's a new face, that's no bad thing," said Yevhen, a 22-year-old Ukrainian serviceman whose job is to keep tanks in a state of readiness in case a ceasefire breaks down.

Fighting broke out in eastern Ukraine in 2014 when Russian-backed rebels rejected Kiev's rule. They now control large swathes of territory. A shaky ceasefire ended major combat in 2015, but deadly clashes still take place regularly. Around 13,000 people have been killed, according to the United Nations.

Interviews with other soldiers in front line areas in eastern Ukraine indicated that troops were disappointed at what they saw as a failure under Poroshenko to invest properly in military hardware, and suspected that money meant for defence was being siphoned off through corruption.

"We see how money is being stolen from the military budget, from the army," said a member of the Azov battalion which comes under the command of Ukraine's National Guard. He declined to be identified, only giving his nom-de-guerre, Eydar.

Speaking in another part of Donetsk region, near Novoluhanske, he did not name his preferred candidate, but said it should be someone who fights for his country, "and not for personal interests or the interests of some clan or other".

Such criticism shows how badly Poroshenko has been hurt by a corruption scandal involving the son of an ally accused of smuggling military equipment from Russia and selling it to the local armed forces at inflated prices.

"Because if the government continues at the same pace it has been moving, we cannot say how long this war is going to last," said the serviceman, who asked to be identified by his nom de guerre, Takho.