By Polina Ivanova KIEV (Reuters) - Ukrainian tycoon Ihor Kolomoisky said on Thursday he expects some 'odious individuals' at the central bank could be removed from office if presidential front-runner Volodymyr Zelenskiy wins Sunday's run-off election. The tycoon has been at loggerheads with the central bank over PrivatBank, the country's largest bank, which he co-founded and which the government nationalised in 2016. Critics of Zelenskiy, a comedian with no political experience but who is leading President Petro Poroshenko according to opinion polls, say his many ties to Kolomoisky indicate he will do the tycoon's bidding if he wins office 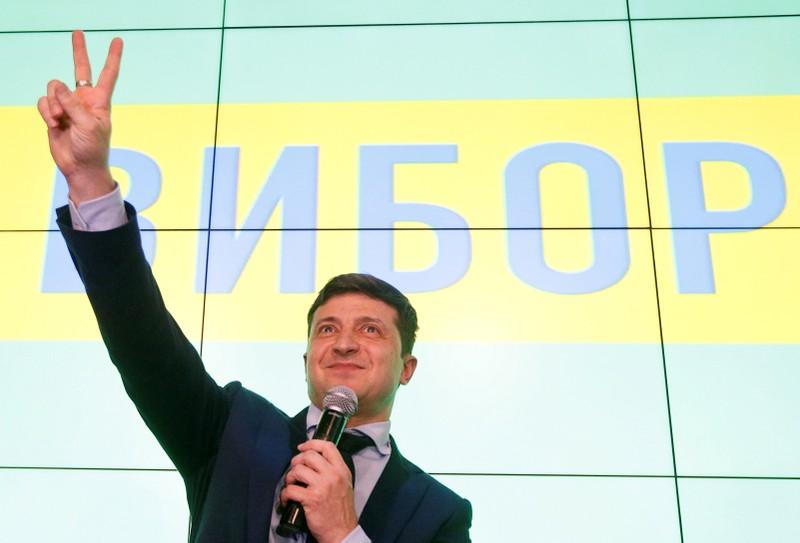 The tycoon has been at loggerheads with the central bank over PrivatBank, the country's largest bank, which he co-founded and which the government nationalised in 2016.

Critics of Zelenskiy, a comedian with no political experience but who is leading President Petro Poroshenko according to opinion polls, say his many ties to Kolomoisky indicate he will do the tycoon's bidding if he wins office. Zelenskiy, whose shows air on a TV channel controlled by the tycoon, denies this.

Kolomoisky has publicly supported Zelenskiy, and he said on Thursday he was friends with him but the relationship would change if he is elected.

"When someone becomes president, they stop being your friend," he said. "That all ends when someone gets that kind of role and his level of responsibility rises exponentially."

One area at issue is the fate of PrivatBank. Kolomoisky won a major victory on Thursday in his battle with the government over the bank's nationalisation as a court ruled the change of ownership was illegal.

Asked whether he would be keen to see any changes to the leadership of the central bank, Kolomoisky said he supported its current leader Yakiv Smoliy, but predicted a new president would lead to other changes.

"There are a few odious individuals there," Kolomoisky said.

"But I think that when there will be a change of guard – if, God willing, it happens – in the highest office, then this Yakiv Smoliy, he will himself clean up in his Augean stables," Kolomoisky said, referring to one of the tasks set for the Greek mythological character Hercules.

Kiev authorities took over PrivatBank in December 2016 and accused Kolomoisky of fraudulently siphoning out millions of dollars during his ownership. Kolomoisky denies any wrongdoing.

"I don't call it a nationalisation, I call it an expropriation," Kolomoisky told Reuters. "It wasn't 1917 was it? It was 2017... But they robbed me like a time machine had been switched on and we had returned 100 years," he said, referring to the Bolshevik revolution in Russia.

PrivatBank was nationalised as part of a clean-up of the banking system backed by the International Monetary Fund, and the authorities have previously warned that any step to reverse the decision could derail Ukraine's $3.9 billion loan programme.

Zelenskiy's celebrity was established by a comedy show - in which he played an everyman who accidentally becomes president - broadcast by 1+1, a TV network controlled by Kolomoisky.

Reuters has documented a string of other ties between the two, including shared business partners, bodyguards and advisers.

"We had a business relationship, yes. And we have friendly relations, yes... I believe that we were good mates who were connected by a shared contract in television," Kolomoisky told Reuters on Thursday.

"(But) no one calls (French President Emmanuel) Macron and says 'look, Emmanuel, Vasya's going to come over tomorrow, you need to do such-and-such'... And I want the same for Ukraine," Kolomoisky said.

On the question of whether he has supported Zelenskiy's campaign financially, Kolomoisky said no, and that there was no need.

"He's a wealthy person, and unlike many in Ukraine his money is clean," he said.

Zelenskiy has repeatedly denied he would introduce policies favourable to Kolomoisky's interests if elected.

Asked in a Reuters interview whether PrivatBank would be returned to Kolomoisky, Zelenskiy said: "Am I that crazy? Do I want to lose my life, reputation?"