By Natalia Zinets KIEV (Reuters) - Ukrainian politicians and foreign diplomats joined thousands marching in a gay pride parade in Kiev on Sunday, the biggest and most peaceful ever in the former Soviet country. 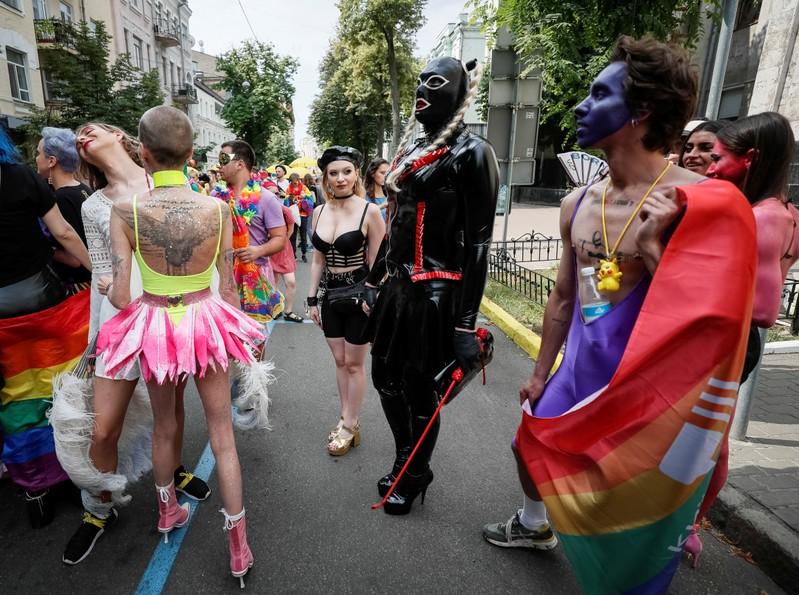 KIEV (Reuters) - Ukrainian politicians and foreign diplomats joined thousands marching in a gay pride parade in Kiev on Sunday, the biggest and most peaceful ever in the former Soviet country.

Crowds of people, many dressed in bright colours, paraded along streets in the centre of the Ukrainian capital, holding up banners saying "Diversity is beautiful", "Human rights = happy country", "No violence - yes rights!".

They were flanked by a thick cordon of police in helmets but there was no sign of violence despite the presence of a few hundred protesters.

Sunday's march in Kiev was part of "Pride Month" celebrated by lesbian, gay, bisexual and transgender (LGBT) people around the world.

Ukrainian President Volodymyr Zelenskiy, a former comedian who took office last month, has promoted a tolerant culture, saying he stands for all people's equality and freedom.

"Our desire is to convey to a majority of people that LGBT is normality," Eduard, a 17-year-old tattoo artist, told Reuters.

"I am taking part for the fifth time. Ukraine is making significant progress compared to previous years, security and organization are much better."

Zelenskiy's office urged the police to prevent violence and guarantee the safety of participants in the March of Equality.

"Ukraine's Constitution states that citizens have equal constitutional rights and freedoms," it said in a post on its Facebook page on Sunday morning.

Ruslana Panukhnyk, one of the organizers of the capital's annual gay pride march, told journalists after the event that about 8,000 people had attended it far more than 5,000 last year.

"We are satisfied with the cooperation with the police. There were some small incidents, but no injuries," she said.

"The most important (thing) for us is human rights."

Under Western-backed leadership, Ukraine's parliament passed legislation in 2015 to ban discrimination in the workplace as part of a series of laws Ukraine needed to pass to qualify for a visa-free travel agreement with the European Union.

"Thank you to the police and other law enforcement agencies for protecting today's Pride event in Kiev," Judith Gough, the British ambassador to Ukraine who joined the march, wrote in a tweet.

She posted pictures of herself and other Western ambassadors who participated in the event.

William B. Taylor, charge d'affaires at the U.S. Embassy in Ukraine, wrote in a tweet: "We stand with all Ukrainians striving for equality and non-discrimination".

The government has increased support for LGBT rights since a Western-backed leadership came to power in 2014, but critics say homophobic attitudes remain relatively widespread.

Almost 47% of Ukrainians think that rights of sexual minorities should be limited while 37.5% are against restrictions, and 15.6% do not have an opinion, according to a survey published by independent think-tank Democratic Initiatives last December. It interviewed 1,998 people.

Sunday's march was a far cry from violent clashes witnessed at the same event in 2015, but protesters also made their voices heard.

"We are for God and Ukraine... For us it is important that people, who have a sexual sin, do not make propaganda out of it," Oksana Korchynska, a member of the opposition Radical Party which says it promotes family values, told Reuters. She joined a few hundred protesters at the event.

Police detained nine men on Saturday, who allegedly were planning protests but police said they had seen no reason to detain anyone on Sunday.