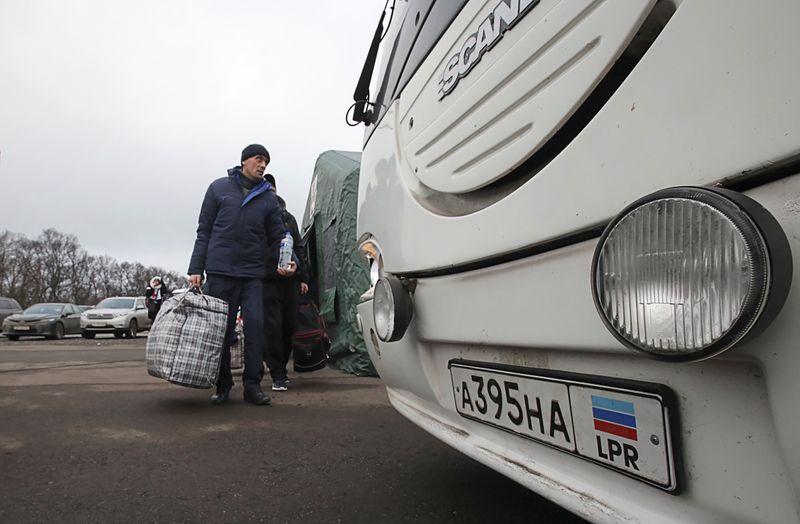 By Pavel Polityuk and Vladimir Soldatkin

KIEV/MOSCOW (Reuters) - Ukrainian government forces and pro-Russian separatists in the east completed a large-scale prisoner swap on Sunday after bussing scores of detainees in the five-year conflict to an exchange point in the breakaway Donbass region.

The swap should help build confidence between the two sides, who are wrangling over how to implement a peace deal after the loss of more than 13,000 lives, but major disagreements remain and full normalisation is far off.

Ukraine said 76 pro-government detainees were handed over, while separatists said they took 120 of their prisoners during the swap at a checkpoint near the industrial town of Horlivka.

"The main thing is that the people are at home before the New Year ... I am happy, I think they are too," said Ukrainian President Volodymyr Zelenskiy, greeting the returnees with tearful relatives at a Kiev airport.

He thanked fellow leaders of the so-called "Normandy Four" group - Russia, Ukraine, France and Germany - for helping mediate the swap during talks in Paris earlier this month.

Some Ukrainians remained in custody both in Russia and Donbass and may figure in future swaps, Zelenskiy said.

Some in Ukraine were unhappy that police accused of firing on protesters against the Russia-friendly then-president Viktor Yanukovich in 2014 were among those handed to the separatists. But Zelenskiy said the deal was an all-for-all swap.

As the exchange began early in the morning, Ukrainian men and women dressed in civilian clothes got off buses at the rendezvous and were herded into a tent by the separatists.

"The prisoner swap that was completed today is a long-awaited humanitarian measure," they said in a joint statement, calling for full implementation of a ceasefire.

Sporadic fighting continues in the region, though major conflict has died down.

"Today's prisoner exchange in #Donbass will bring relief to the persons involved and their families, but it will not bring the (peace) settlement any closer," Dmitri Trenin, head of the Moscow Carnegie Center and a former colonel in the Russian army, wrote on social media.

"The... terms remain anathema in Kiev, and this won't change. The conflict is much more likely to become frozen than resolved."

Relations between Ukraine and Russia collapsed following Moscow's annexation of the Crimean peninsula in 2014 and its subsequent support for separatists in eastern Ukraine.

There have been several prisoner exchanges between Kiev and the separatists. In the last swap, in December 2017, Ukraine handed over about 300 captives in exchange for around 70 people.

In September, Russia and Ukraine also swapped dozens of prisoners.

Relations between the two countries have shown signs of improving in other areas too, including in the gas sector, where Kiev and Moscow are discussing a new transit contract.

Ukraine has repeatedly accused Russia of using gas supplies to put it under pressure, but last week they agreed on the main points of a new deal.

Widely criticized domestically for his plan to grant special status to Donbass to help end the conflict, Zelenskiy's latest actions have given rise to cautious optimism in some quarters.