By Kylie MacLellan LONDON (Reuters) - British Prime Minister Boris Johnson came under fire on Monday for his response to being shown a photo of a sick child lying on a hospital floor ahead of the Dec. 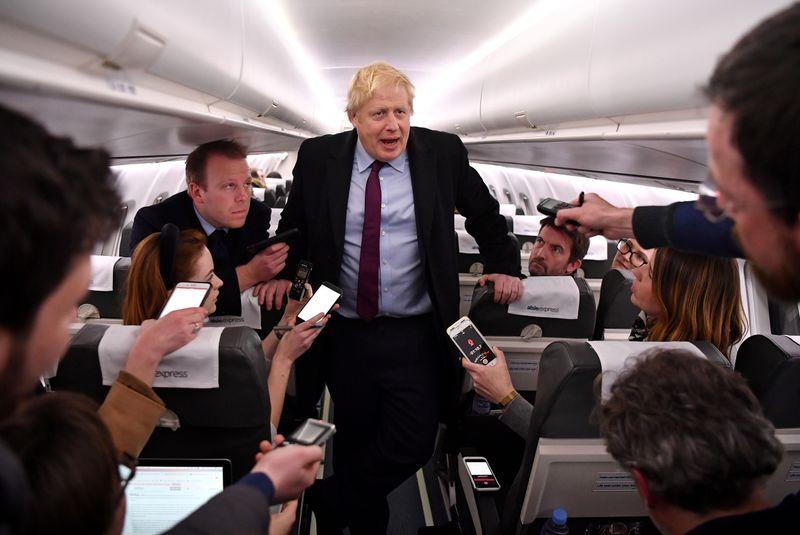 LONDON (Reuters) - British Prime Minister Boris Johnson came under fire on Monday for his response to being shown a photo of a sick child lying on a hospital floor ahead of the Dec. 12 election.

Johnson's Conservatives lead the opposition Labour Party in opinion polls, with Brexit and the future of the country's public health service the two most prominent campaign issues.

During an interview, an ITV reporter repeatedly tried to show Johnson a picture on his phone of the 4-year-old boy lying on a pile of coats, which featured on the front page of the Labour-supporting Daily Mirror.

The newspaper said the boy had suspected pneumonia and had to be treated on the floor because there were no beds available.

Johnson initially avoided looking at the phone, and instead began describing his investment plans for the National Health Service (NHS) while saying he had not had a chance to see the photo.

The reporter said Johnson then took his phone and put it in his pocket.

When challenged, Johnson took the phone out, looked at it and said: "It is a terrible, terrible photo, and I apologise obviously to the family and all those who have terrible experiences in the NHS, but what we are doing is supporting the NHS.

"On the whole I think patients in the NHS have a much, much better experience than this poor kid has had," he added, before saying: "I am sorry to have taken your phone."

Opposition parties were quick to share the footage on social media, saying it showed Johnson had no empathy for patients.

Health minister Matt Hancock later made an unscheduled visit to the hospital in the central English city of Leeds, saying he had been "horrified" by the picture.

Asked if he had come because the Conservatives were panicked by the possible impact of the photo on the campaign, Hancock said: "No, what people want to see is the substance of increased investment...making sure we are dealing with the problems."

BBC Political Editor Laura Kuenssberg said on Twitter that Hancock was greeted by a group of protesting Labour activists, one of whom had punched his adviser. She later revised this account, posting a video in which one of Hancock's team simply appeared to bump into the outstretched arm of a protester.

Separately, during a campaign visit near the northeastern city of Sunderland, a target for the Conservatives, Johnson was taken to task by a voter who challenged his party over a spoof website meant to distract voters from Labour's policy programme.

Timed to coincide with the launch of Labour's manifesto last month, the website, http://www.labourmanifesto.co.uk, accuses the party of having "no plan for Brexit", proposing higher taxes and planning two more referendums.

Asked if it was fear of Labour that made his party set up the website, Johnson said: "I'm afraid the short answer to that question is that I haven't got the foggiest idea."