By Kylie MacLellan and William James LONDON (Reuters) - The two candidates vying to be Britain's next prime minister set a high bar on Monday for success in Brexit negotiations, saying that even a significant concession from the European Union on the Irish border would be insufficient. 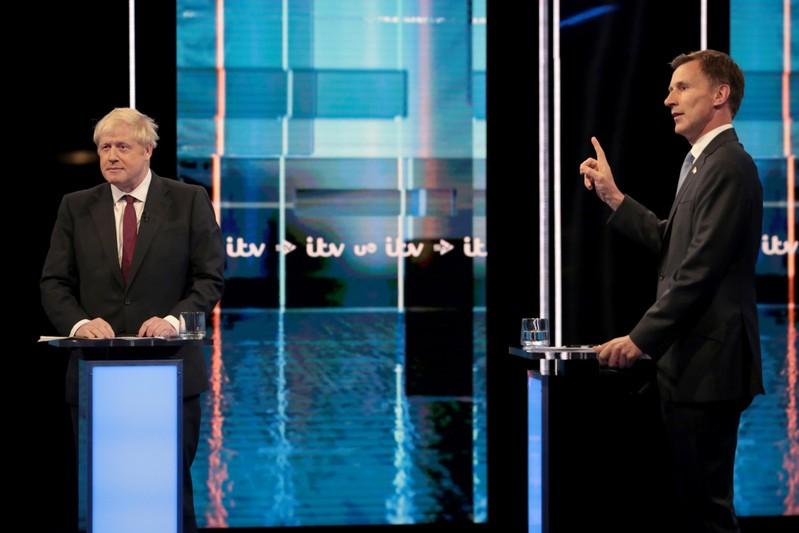 By Kylie MacLellan and William James

LONDON (Reuters) - The two candidates vying to be Britain's next prime minister set a high bar on Monday for success in Brexit negotiations, saying that even a significant concession from the European Union on the Irish border would be insufficient.

Both frontrunner Boris Johnson and underdog Jeremy Hunt said on Monday that they would not be willing to accept the so-called Northern Irish backstop element of Theresa May's Brexit deal, even if a time limit was set.

Britain's next leader will be announced next week, and has to persuade the EU to restart talks that other EU leaders have been adamant cannot be re-opened, or else lead Britain into the economic uncertainty of an unmanaged exit.

Now it is clear the winner must also persuade Brussels to drop one of its most steadfast demands - an insurance policy designed to prevent the return of a hard border between EU-member Ireland and British province Northern Ireland.

Asked during a leadership debate whether the backstop would be acceptable if a time limit could be agreed, both Johnson and Hunt said it would not.

"I'm not attracted to time limits or unilateral escape hatches or all these elaborate devices, glosses, codicils and so on that you could apply to the backstop," Johnson said during a leadership debate organised by the Sun newspaper and TalkRadio.

Hunt agreed, adding: "The backstop, as it is, is dead ... I don't think tweaking it with a time limit will do the trick, we've got to find a new way."

Opposition to the backstop within Britain's deeply divided parliament was one of the key reasons outgoing Prime Minister May's deal was rejected three times by lawmakers - losses that ultimately forced her to resign.

But a senior lawmaker from Northern Ireland's Democratic Unionist Party, which props up the Conservatives in parliament and opposed May's deal, said last month the party was not looking for "earth-shattering" changes to the backstop.

Eliminating a hard border between Northern Ireland and Ireland and providing frictionless trade was a crucial part of a 1998 peace deal that ended three decades of sectarian violence.

The two candidates' positions set out on Monday go far beyond what May managed to negotiate with the EU.

The European Union has said it is not prepared to renegotiate the deal, but both Hunt and Johnson are promising to do so, and want to take Britain out of the EU by the current deadline of Oct. 31.

Johnson has the more hardline stance and refuses to countenance any further delay to Brexit after May's government was forced to delay it twice beyond its original date of March 29.

When it was put to Johnson that it was completely unrealistic to get the deal renegotiated and passed by Oct. 31, he said: "I don't think it is remotely unrealistic."

Hunt says he would be prepared to delay Brexit if a deal were in sight, but that he would take Britain out of the bloc without one if it was clear no agreement could be reached. He warned parliament not to try and block a no-deal Brexit.

"I would urge my colleagues not to take no deal off the table, I think it is one of the most dangerous and destructive things they can do when we are trying to get a deal but we can't control what parliament does," Hunt said.