London: The head of the British military facility analysing the Novichok nerve agent used to poison Russian spy Sergei Skripal and his daughter said on Wednesday it has "not identified the precise source" of the substance.

Gary Aitkenhead, chief executive of the Porton Down defence laboratory, told Britain's Sky News that analysts had identified it as military-grade Novichok, but they had not proved it was made in Russia.

"We have not identified the precise source, but we have provided the scientific info to government who have then used a number of other sources to piece together the conclusions," he said. 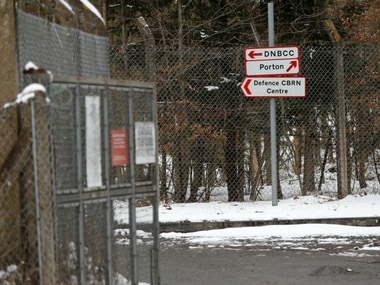 Signs prohibiting access near the Porton Down Defence Science and Technology Laboratory. Reuters

Aitkenhead added that "extremely sophisticated methods" were needed to create the nerve agent, and that was "something only in the capabilities of a state actor".

Sergei Skripal and his daughter have been in hospital since 4 March after the poisoning in Britain that London and its major Western allies have blamed on Russia.

The first use of chemical weapons in Europe since World War II has chilled Moscow's relations with the West, as both sides have expelled scores of diplomats.

Moscow has denied any involvement in the incident, with Russian foreign minister Sergei Lavrov on Monday suggesting that the British government may be behind the poisoning to distract attention from problems around Brexit.

Aitkenhead would not comment on whether Porton Down had developed or keeps stocks of Novichok, but he dismissed claims the agent used to poison the Skripals had come from the site.

"There is no way anything like that could have come from us or left the four walls of our facility," he said.

The Organisation for the Prohibition of Chemical Weapons (OPCW), the world's chemical watchdog, will meet on Wednesday to discuss Britain's allegations that Russia was responsible for the poisoning, according to documents released on Tuesday.

It said Russia asked the OPCW, which has received samples of the Novichok used that it has been analysing, for the meeting.

The confidential gathering will start at 10 am (01.30 IST) at its headquarters in The Hague.