UK calls for reset with EU and 'refinement' of Brexit deal

By Guy Faulconbridge and Elizabeth Piper LONDON (Reuters) - Britain called on Monday for a reset in relations with the European Union and a refinement of a Brexit deal covering trade with Northern Ireland, saying trust was eroded when Brussels attempted to restrict COVID-19 vaccine supplies. 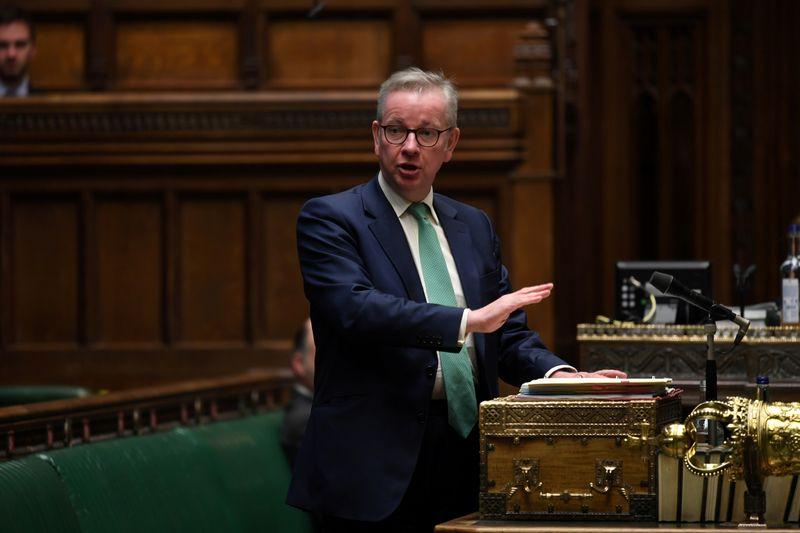 LONDON (Reuters) - Britain called on Monday for a reset in relations with the European Union and a refinement of a Brexit deal covering trade with Northern Ireland, saying trust was eroded when Brussels attempted to restrict COVID-19 vaccine supplies.

Relations between Brussels and London strained by years of bruising Brexit talks took a turn for the worse last month when the EU threatened to use emergency measures to stop coronavirus vaccines going from the bloc into Northern Ireland.

To avoid creating a hard border on the island of Ireland, Northern Ireland remained within the EU's single market for goods under the Brexit deal, effectively creating a frontier within the United Kingdom.

The EU swiftly changed its position on the vaccines but London hopes to capitalise on the gaffe to win changes to the Brexit deal because the new rules have caused disruption in Britain's trade with Northern Ireland.

"It was a moment when trust was eroded, when damage was done and where movement is required in order to ensure that we have an appropriate reset," Michael Gove, who is in charge of implementing the divorce deal, told a parliamentary committee.

Striking at the heart of the EU's project, Gove scolded the bloc for putting its members above the people of Northern Ireland by raising the prospect of checks on vaccines at the border - something Brussels has long said it wanted to avoid.

"If people put a particular type of integrationist theology ahead of the interests of the people of Northern Ireland they are not serving the cause of peace and progress in Northern Ireland, and that is my principal and overriding concern," he said.

"Pandora's Box has been opened and that is concerning ... who knows what Trojan horses will come out," Gove said, quoting former Labour Foreign Secretary Ernest Bevin's words about the idea of joining a forerunner of the EU.

He demanded grace periods for the transport of food from Britain to Northern Ireland be extended from a few months to at last two years.

"There are a number of issues ... where we believe that we do need refinement of the way in which the protocol operates for it to be effective in the interests of the people of Northern Ireland," Gove told the lawmakers.

Some Northern Irish politicians have called for the protocol to be scrapped saying it has caused shortages in supermarkets and impeded the delivery of other goods.

The EU and Britain have agreed to work intensively to resolve the difficulties and Gove is expected to meet Sefcovic on Thursday to try to find a way forward.

Politicians have been keen to avoid a hard border between Northern Ireland and Ireland, fearing it could be detrimental to the 1998 peace agreement that ended three decades of conflict in the province.