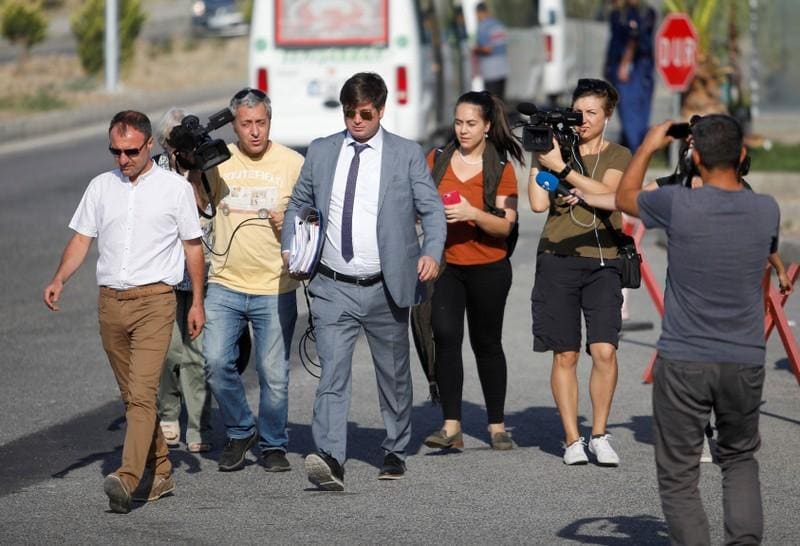 By Lesley Wroughton and Steve Holland

The Trump administration escalated the pressure campaign to free Andrew Brunson a day after a court ordered that he be moved to house arrest after 21 months in detention. He is on trial for terrorism charges.

"The United States will impose large sanctions on Turkey for their long time detainment of Pastor Andrew Brunson, a great Christian, family man and wonderful human being," Trump wrote in a tweet.

"He is suffering greatly. This innocent man of faith should be released immediately!"

"To President (Tayyip) Erdogan and the Turkish government, I have a message on behalf of the president of the United States of America: release Pastor Andrew Brunson now or be prepared to face the consequences," Pence said at a religious freedom event hosted by the U.S. State Department.

Neither Trump nor Pence elaborated on the type of sanctions that the United States could impose.

The threat of sanctions prompted a downturn in Turkey's financial markets. There was no immediate comment from U.S. lawmakers who have threatened to withhold weapons sales to Turkey as strains have escalated over Brunson's detention.

Turkey's lira currency briefly weakened to 4.89 to the dollar following reports of Pence's comments, but recovered later to stand at 4.8420 at 11:01 a.m. EDT (1501 GMT). The Istanbul bourse fell as much as 1.75 percent, before picking up slightly.

Brunson, who is from North Carolina and has worked in Turkey for more than 20 years, has been accused of helping the group Ankara says was behind a failed military coup in 2016. The pastor, who has denied the charges, faces up to 35 years in jail if found guilty.

Erdogan has in the past linked Brunson's fate with that of the U.S.-based Muslim cleric Fethullah Gulen. Ankara accuses Gulen of masterminding the failed coup, and has long sought his extradition to Turkey. Gulen has denied any role in the coup attempt, in which 250 people were killed.

"You have a pastor as well, give him to us," Erdogan said last September, in response to Washington’s calls for Brunson to be released.

Brunson's detention deepened a rift between Washington and Ankara, which are also at odds over the Syrian war and Turkey's plan to buy missile defenses from Russia.

On Wednesday, Brunson was escorted out of prison in the coastal city of Izmir, and left in a convoy of cars. His lawyer said he was ordered to wear an electronic monitoring bracelet.

U.S. and Turkish officials had been working on a deal that would lead to Brunson's release, and Washington had expected him to be freed at his trial last week, a source in the United States familiar with developments told Reuters on Wednesday.

U.S. officials had been under the impression that the deal was in place, the source said, adding that when Brunson was not released, Pence spoke with Trump and the two agreed harsh new policy measures were needed to force the issue.

Addressing Brunson's daughter in the audience, Pence said: "I promise you, as I told your father yesterday, President Trump and I will continue to fight to secure your father's full release until he is restored to his family and returns to the United States of America."

The Christian right, an important component of Trump and Pence's voting base, has been pressuring the administration on the Brunson case.