By Lawrence Hurley and Jan Wolfe WASHINGTON (Reuters) - Divisions within the U.S. Supreme Court exposed in its decision preventing a deadline extension for mail-in ballots in Wisconsin indicate how new Justice Amy Barrett Coney Barrett could cast a decisive vote in similar disputes as the Nov. 3 election approaches. 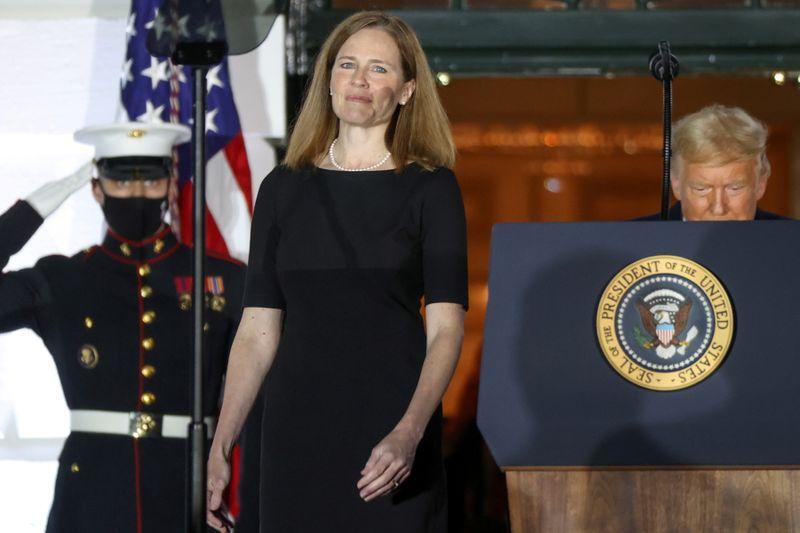 By Lawrence Hurley and Jan Wolfe

WASHINGTON (Reuters) - Divisions within the U.S. Supreme Court exposed in its decision preventing a deadline extension for mail-in ballots in Wisconsin indicate how new Justice Amy Barrett Coney Barrett could cast a decisive vote in similar disputes as the Nov. 3 election approaches.

The decision Monday evening kept in place a Wisconsin policy that mail-in ballots must be in the hands of election officials by the close of polls on Election Day. The decision was issued minutes before the Republican-controlled U.S. Senate voted to confirm Barrett, President Donald Trump's third Supreme Court appointee, giving it a 6-3 conservative majority.

In the Wisconsin case, the court was divided 5-3, with the conservative justices in the majority and the liberals dissenting. Separate individual opinions written by the justices accompanying the court's action touched upon whether it has the authority to second-guess decisions made by state courts interpreting their state's own constitution, a key factor in other election-related cases including a closely watched one from Pennsylvania.

The court also has an election case pending from North Carolina, which like Pennsylvania and Wisconsin is an election battleground state vital to Trump's hopes of winning a second term in his contest with Democrat Joe Biden. More cases could reach the court before or after Election Day.

Hundreds of election-related cases already have been brought in state and federal courts, with Democrats generally seeking to expand access to mail-in and absentee voting as many Americans try to avoid crowded polling places amid the coronavirus pandemic.

The Supreme Court has generally blocked such moves unless the state government has embraced them.

Kavanaugh wrote that "under the U. S. Constitution, the state courts do not have a blank check to rewrite state election laws for federal elections."

Before they joined the Supreme Court, Kavanaugh, Barrett and Chief Justice John Roberts all worked on Bush's side in the litigation involving a recount of ballots in Florida.

Justice Neil Gorsuch, also appointed by Trump, said in the Wisconsin case that federal judges should not second-guess state officials on changes made to election rules during the pandemic.

Gorsuch's comments could suggest that he would vote against allowing an extension of the deadline for mail-in ballots in North Carolina in a case in which the decision by the state election board, not the legislature, is under review.

Joshua Douglas, a University of Kentucky election law professor, said Kavanaugh and Gorsuch's opinions were "even more shocking" than the Wisconsin decision itself.

"Those two decisions unduly deferred to the state legislature, without any regard for the constitutional right to vote," Douglas said.

The Wisconsin state legislature is controlled by Republicans.

Liberal Justice Elena Kagan wrote that the Wisconsin decision "will disenfranchise large numbers of responsible voters in the midst of hazardous pandemic conditions."

In the Pennsylvania litigation, the Supreme Court was divided 4-4, which allowed the state to extend the deadline for mail-in absentee ballots by three days as long as they are postmarked by Election Day. The tie vote occurred because court was shorthanded following the death of liberal Justice Ruth Bader Ginsburg.

Roberts, a conservative, sided with the liberal justices in allowing Pennsylvania's extension but on Monday voted to curb the Wisconsin deadline. Roberts distinguished the two cases, noting that the Pennsylvania case arose from the state's top court whereas the Wisconsin case concerned a federal judge imposing an extended deadline on voting in the state.

Pennsylvania Republicans have brought the case back to the court hoping for a ruling in their favor before Election Day. Barrett potentially could cast the deciding vote.

James Gardner, a University of Buffalo professor of election law, said the court, with Roberts as the decisive vote this year, has generally tried to avoid overriding state officials.

Although the court's approach is "superficially neutral" it often has the effect of curbing voting rights, Gardner said. Many Republican-controlled legislatures have put in place rules limiting access to the polls.

One lingering question for Barrett is whether she might recuse herself from election-related cases. Senate Democrats during the confirmation process asked her not to participate in such cases in light of Trump's comments that he expects the court to decide the election's outcome and wanted her on the bench in time to participate in any such cases.

Barrett has said she will follow the court's normal recusal rules that give individual justices the final say on participating in a case.

On Tuesday, the Luzerne County Board of Elections in Pennsylvania, which backs extending the deadline, filed a rare motion asking Barrett to step aside.

(Reporting by Lawrence Hurley and Jan Wolfe; Editing by Noeleen Walder and Will Dunham)