By Andrew Chung and Lawrence Hurley WASHINGTON (Reuters) - The U.S. Supreme Court on Monday refused to free 'faithless electors' in the complex Electoral College system that decides the outcome of presidential elections from state laws that force them to support the candidate who wins the state's popular vote. The justices unanimously rejected the idea that electors, who act on behalf of a state in the Electoral College vote that occurs weeks after voters go the polls, can exercise discretion in the candidate they back 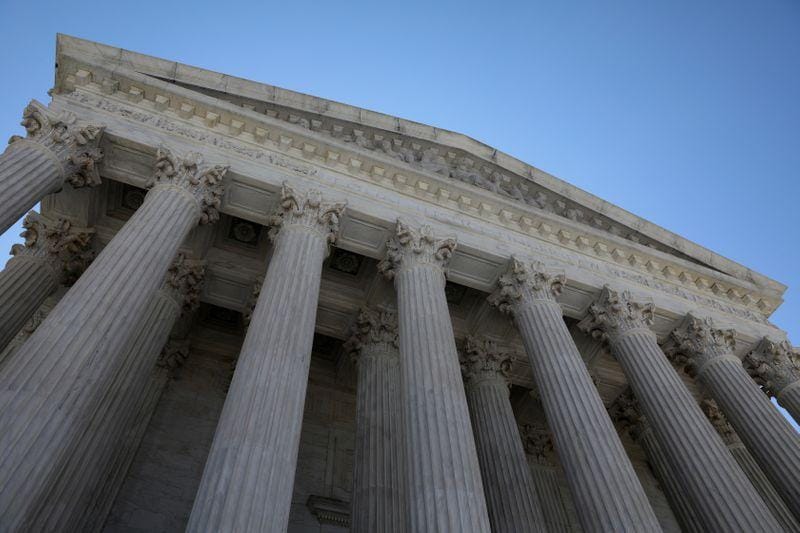 WASHINGTON (Reuters) - The U.S. Supreme Court on Monday refused to free "faithless electors" in the complex Electoral College system that decides the outcome of presidential elections from state laws that force them to support the candidate who wins the state's popular vote.

The justices unanimously rejected the idea that electors, who act on behalf of a state in the Electoral College vote that occurs weeks after voters go the polls, can exercise discretion in the candidate they back. The decision erased a potential complicating factor in the Electoral College as President Donald Trump seeks re-election on Nov. 3 against Democratic challenger Joe Biden.

The court sided with Washington state and Colorado, which had imposed penalties on several "faithless electors" - so named because they defied pledges in 2016 to vote for the winner of their states' popular vote, Democrat Hillary Clinton.

Washington state Attorney General Bob Ferguson said the ruling "reaffirmed the fundamental principle that the vote of the people should matter in choosing the president."

State officials have said faithless electors threaten the integrity of American democracy by subverting the will of the electorate and opening the door to corruption. The plaintiffs had argued that the Constitution requires them to exercise independent judgment to prevent unfit candidates from taking office.

"The Constitution's text and the nation's history both support allowing a state to enforce an elector's pledge to support his party's nominee - and the state voters' choice - for President," liberal Justice Elena Kagan wrote on behalf of the court.

Under the system set out in the U.S. Constitution in the 18th century, a presidential election's winner is determined not by amassing a majority in the national popular vote but by securing a majority of electoral votes allotted to the 50 U.S. states and the District of Columbia.

Electors typically are party loyalists who follow through on their pledges to support the candidate who gets the most votes in their state.

But in 2016, 10 of the 538 electors cast ballots for someone other than their state's popular vote winner, an unusually high number that could have changed the outcome of five of the 58 previous U.S. presidential elections.

Trump, a Republican, defeated Clinton by a margin of 304 to 227 Electoral College votes despite losing the popular vote nationally by about 3 million votes.

Lawrence Lessig, the lawyer representing the electors, said that although he was disappointed in the ruling, he was glad the legal question has been resolved.

"When we launched these cases, we did it because regardless of the outcome, it was critical to resolve this question before it created a constitutional crisis," Lessig added.

Kagan wrote that the Constitution is "bare hones about electors," with no rules binding states in how to oversee them. Citing historical accounts, Kagan added that right from the beginning "presidential electors became trusty transmitters of other people's decisions."

The justices upheld the Washington state Supreme Court's decision that the $1,000 fines against three faithless electors were lawful and did not violate the Constitution's provisions spelling out the Electoral College process.

The justices also reversed a ruling by the Denver-based 10th U.S. Circuit Court of Appeals against Colorado's cancellation of a faithless elector's vote.

Colorado and Washington state are among the 48 states - only Maine and Nebraska excepted - with winner-takes-all systems awarding all electors to the candidate who wins the state's popular vote. Thirty-two states and the District of Columbia have laws intended to control how electors vote. Only a handful enforce them with penalties.

Colorado Secretary of State Jena Griswold said the ruling makes clear that states can invalidate any ballot by an elector that goes against the popular vote.

"People believe that their votes count in the presidential election and that's what the Supreme Court just reaffirmed," Griswold added.

Lead plaintiffs Bret Chiafalo and Micheal Baca were Democratic electors who sought to persuade Republican electors to disregard their pledges and help deny Trump the presidency. They cast their ballots for moderate Republicans and not Clinton even she won the popular vote in both states.