By Andrew Chung WASHINGTON (Reuters) - U.S. Supreme Court justices considered on Monday whether to make it easier for federal authorities to deport certain immigrants who have committed crimes, a population targeted by President Donald Trump's administration. The nine justices during an hour of arguments appeared divided over the fate of Andre Martello Barton, a legal permanent U.S 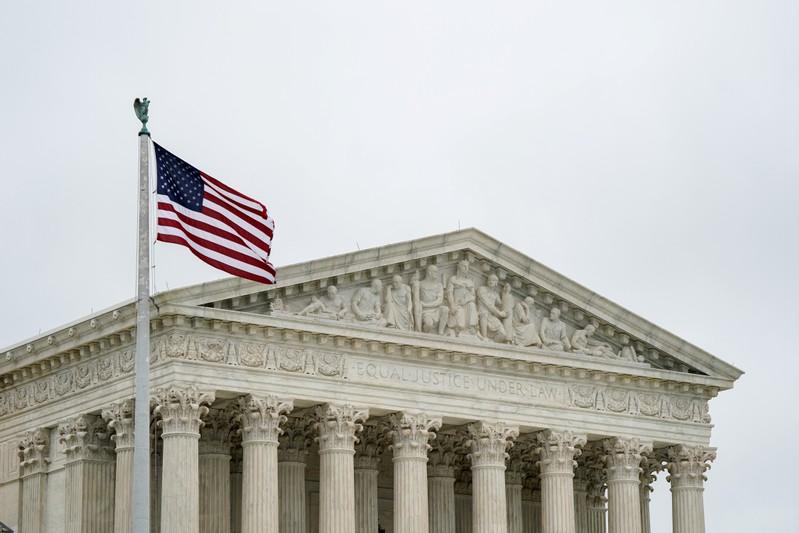 WASHINGTON (Reuters) - U.S. Supreme Court justices considered on Monday whether to make it easier for federal authorities to deport certain immigrants who have committed crimes, a population targeted by President Donald Trump's administration.

The nine justices during an hour of arguments appeared divided over the fate of Andre Martello Barton, a legal permanent U.S. resident from Jamaica who challenged his planned deportation for drug and gun convictions in Georgia dating back to 1996.

Barton appealed a lower court ruling that the 41-year-old father of four was ineligible to have his deportation cancelled under a law that lets some longtime legal residents avoid removal for certain crimes. The court's liberal justices seemed sympathetic toward Barton. Some conservative justices appeared inclined to agree with the government's bid to deport him.

The conservative-majority court's eventual ruling, due by the end of June, could make it easier to expel thousands of immigrants with criminal convictions - many for minor offences - who reside legally in the United States. Trump has made his hardline immigration policies a top priority of his administration and a key issue in his 2020 re-election campaign.

Permanent residents who face deportation may apply to have their removal cancelled if they have been living continuously in the United States for at least seven years, except if they have committed certain serious felonies.

At issue in the case is the meaning of a 1996 change in the law known as the "stop-time rule" that disqualifies people who commit certain crimes from this benefit by stopping the clock on their period of continuous residency.

Barton, a car repair shop manager, came to the United States as a teenager with his mother in 1989. He was convicted in 1996 of assault and possession of a firearm in an incident in which his friend shot at a house from a car he was driving. He also was convicted of drug possession in 2007 and 2008.

In 2017, immigration authorities said Barton's deportation could not be cancelled because the 1996 assault charges triggered the stop-time rule, just months before he reached the seven-year milestone. The Atlanta-based 11th U.S. Circuit Court of Appeals upheld the decision in 2018.

The federal government had said the rule was triggered because the assault charge would bar his admission into the country, even though as of 1996 he had resided in the United States too long to be declared deportable for that crime.

Barton's lawyers argued that admission is different from deportation and he cannot be declared inadmissible because he had already been admitted. The Trump administration argued against Barton's position.

At one point, the arguments veered into whether inadmissible is similar to words like inedible or immovable.

Conservative Justice Samuel Alito, suggesting that inadmissible is a status a person becomes for committing a crime, asked whether a doctor treating a person who ate rotten fish would say it was not inedible because it was consumed.

Liberal Justice Elena Kagan pushed back, saying the meaning depends on the context, just like a car, despite its weight, is not immovable if it has just been moved.

"So too here, it's not clear that you would say an alien is inadmissible if the alien has just been admitted," Kagan said.

There are more than 13 million lawful U.S. permanent residents, also known as "green card" holders, according to the Department of Homeland Security. Of the estimated 1.9 million non-citizens the government has deemed deportable based on a criminal convictions, most are legal residents or those in the country on temporary visas, according to the Migration Policy Institute, a research organization.

Call with Biden was a return to traditional UK-U.S. relations, says UK's Johnson

LONDON (Reuters) - British Prime Minister Boris Johnson described his phone call with U.S. President-elect Joe Biden as a return to traditional issues in relations between Britain and the United States. "It was a kind of return to the kind of business that we're used to doing together: sticking up for democracy around the world, human rights, free trade, NATO, our joint security, the transatlantic alliance ..

By Nvard Hovhannisyan and Nailia Bagirova YEREVAN/BAKU (Reuters) - The fate of Armenia's prime minister hung in the balance on Wednesday after parliament agreed to discuss protesters' demands for his resignation over a ceasefire that secured territorial advances for Azerbaijan in Nagorno-Karabakh.