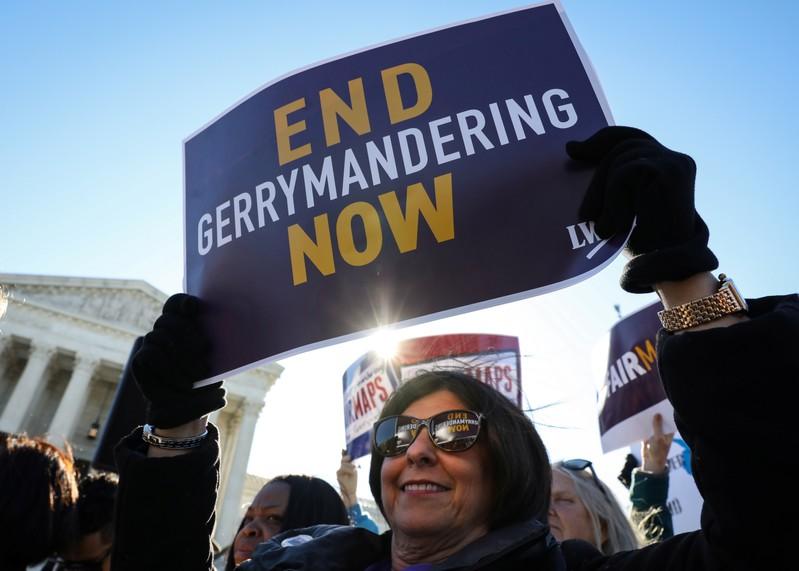 More than two hours of arguments in major cases from North Carolina and Maryland on the practice known as partisan gerrymandering focused on whether courts should be empowered to block electoral maps when they are drawn by legislators expressly to give one political party a lopsided advantage.

Conservative Justice Brett Kavanaugh, appointed to the court last year by President Donald Trump, emerged as a potential decisive vote in the rulings due by the end of June, posing questions to both sides.

The liberal justices appeared more open toward letting courts intervene. But with the court having a 5-4 conservative margin, there may not be a majority to allow judicial action against gerrymandering, a practice critics have said is only getting worse.

The justices last year failed to deliver a definitive ruling on the legality of partisan gerrymandering. They got another chance in the cases before them on Tuesday challenging a Republican-drawn 13-district statewide U.S. House of Representatives map in North Carolina and a single Democratic-drawn House district in Maryland.

The outcome could impact U.S. elections for decades either by allowing federal courts to curb partisan gerrymandering or by removing their power to do so, giving state legislators a freer hand to draw districts as they choose.

"Why should we wade into this?" asked conservative Justice Neil Gorsuch, appointed by Republican President Donald Trump in 2017.

Critics have said gerrymandering has become increasingly effective and insidious by using precise voter data and powerful computer software. The result in many states has been the creation of electoral districts, sometimes oddly shaped to include or exclude certain localities, that maximize one party's chances of winning and diluting the clout of voters who tend to support the other party.

Gerrymandering also tends to foster the election of candidates with more extreme views at the expense of moderates, according to critics, adding to U.S. political polarization.

Conservative Chief Justice John Roberts showed sympathy toward Republican voters in the Maryland district that was redrawn to help a Democrat win, but at other times appeared sceptical about whether courts should even be allowed to hear such claims.

Justice Samuel Alito asked probing questions that indicated he believed that electoral map drawing, an inherently political act, must be left to legislatures not courts.

Plaintiffs in the two cases - Democratic voters in North Carolina and Republican voters in Maryland - have said the maps were drawn to diminish their voting power, violating their constitutional rights. In both cases, lower courts ruled that the contested districts violated the U.S. Constitution's guarantee of equal protection under the law, the right to free speech and association, or constitutional provisions governing elections.

Kavanaugh like Gorsuch wondered whether the Supreme Court needed to intervene when there has been "a fair amount of activity" in the states, including the adoption of independent redistricting commissions to handle political map drawing rather than legislators in the interest of fairness.

But Kavanaugh said he was "not going to dispute" the North Carolina map challengers' claim that partisan gerrymandering is problematic for democracy.

"Have we really reached the moment, even though it would be a big lift for this court to get involved, where the other actors can't do it?" Kavanaugh asked, referring to the states.

Legislative districts are redrawn nationwide to reflect population changes after the federal census each decade. In most states, redistricting is done by the party in power. Gerrymandering is carried out by cramming as many like-minded voters as possible into a small number of districts while spreading the rest in other districts too thinly to form a majority.

Liberal justices spoke of the unfairness of maps that allow a party to receive far fewer seats than their statewide vote tally would indicate. Kavanaugh asked repeatedly whether the Constitution could require "proportional representation" - with legislative seats gained being proportional to the statewide vote's party breakdown - to be used when districts being drawn.

The Supreme Court previously has ruled against gerrymandering intended to harm racial minorities. It has never reined in gerrymandering done purely for partisan advantage.

In North Carolina, Republican legislators reworked House districts in 2016 to ensure that 10 Republicans were elected to House seats, compared to just three Democrats, in a state where voters are closely divided between the two parties.

One of the plaintiffs' attorneys, Allison Riggs, told the justices that the high court's reputation could be harmed if it does nothing about blatant partisan bias in map-drawing.

When liberal Justice Elena Kagan noted that of 24,000 simulated alternate maps for North Carolina, 99 percent were less biased than the one Republicans adopted, lawyer Paul Clement, representing Republican lawmakers, said that merely demonstrated that map-making was discretionary and should be a political matter, not a judicial one.

On the Maryland map, Kagan said that "under any measure, this is excessive."

Liberal Justice Sonia Sotomayor told Clement, "This is what this is all about: you're discriminating on the basis of a group's speech and diluting their vote accordingly."

About 150 people including Republican former California Governor Arnold Schwarzenegger held an anti-gerrymandering rally outside the court, some holding signs reading, "Unrig our democracy."