By Zachary Fagenson, Matt Spetalnick and Lesley Wroughton MIAMI/WASHINGTON (Reuters) - The Trump administration on Wednesday imposed new sanctions and other punitive measures on Cuba and Venezuela, seeking to ratchet up U.S. pressure on Havana to end its support for Venezuela's socialist president, Nicolas Maduro. Speaking to a Cuban exile group in Miami, U.S. 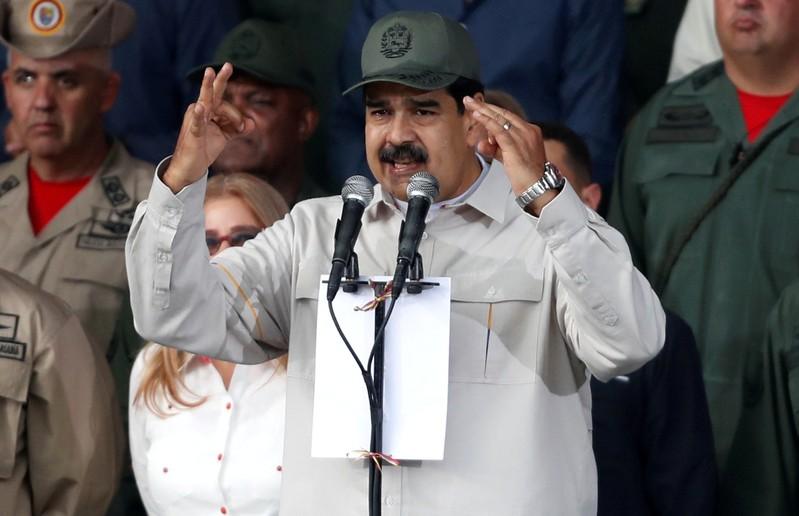 MIAMI/WASHINGTON (Reuters) - The Trump administration on Wednesday imposed new sanctions and other punitive measures on Cuba and Venezuela, seeking to ratchet up U.S. pressure on Havana to end its support for Venezuela's socialist president, Nicolas Maduro.

Speaking to a Cuban exile group in Miami, U.S. national security adviser John Bolton said the United States was targeting Cuba's military and intelligence services, including a military-owned airline, for additional sanctions and was tightening travel and trade restrictions against the island.

Bolton's speech followed the State Department's announcement on Wednesday that it was lifting a long-standing ban against U.S. citizens filing lawsuits against foreign companies that use properties seized by Cuba’s Communist government since Fidel Castro’s 1959 revolution.

President Donald Trump's decision, which the State Department said could unleash hundreds of thousands of legal claims worth tens of billions of dollars, drew swift criticism from European and Canadian allies, whose companies have significant interests in Cuba.

The Cuban government, which could be hindered in its efforts to attract new foreign investment, denounced it as "an attack on international law."

Taking aim at Venezuela, Bolton said the United States was also imposing sanctions on the country's central bank, restricting U.S. transactions and prohibiting access to dollars by an institution he described as crucial to keeping Maduro in power. Bolton also announced new sanctions on Nicaragua.

While accusing Cuba of propping up Maduro with its security forces in the country, Bolton also used the opportunity to issue a warning to "all external actors, including Russia," against deploying military assets to support the Venezuelan leader.

"The United States will consider such provocative actions a threat to international peace and security in the region," Bolton said, noting that Moscow recently sent in military flights carrying 35 tons of unknown cargo and a hundred military personnel.

However, Cuba appears unlikely to be budged by the Trump administration's demands to dump Maduro, a longtime ally of Havana, and Maduro has also shown little sign of losing the loyalty of the Venezuela military despite tough oil-related U.S. sanctions on the OPEC member-nation.

"No one will rip the (fatherland) away from us, neither by seduction nor by force," Cuba's President Miguel Diaz-Canel wrote on Twitter. "We Cubans do not surrender."

Amid Venezuela's political and economic crisis, opposition leader Juan Guaido invoked the constitution in January to assume the interim presidency. The United States and most Western countries have backed Guaido as head of state. Maduro, backed by Cuba, Russia and China, has denounced Guaido as a U.S. puppet.

Bolton, a longtime Cuba hardliner, was frequently interrupted by applause in his address to an organisation of veterans of the U.S.-backed Bay of Pigs invasion on the 58th anniversary of the failed operation to overthrow Cuba's Communist government. His speech was a sequel to one he made late last year branding Cuba, Venezuela and Nicaragua a "troika of tyranny."

Bolton's announcements included further measures aimed at rolling back parts of the historic opening to Cuba, an old Cold War foe, under his predecessor, Barack Obama.

The Obama administration's approach, he said, "provided the Cuban regime with the necessary political cover to expand its malign influence and ideological imperialism across the region."

Among the Cuba measures announced by Bolton was the reinstatment of limits on U.S. citizens sending remittances to Cuba at $1,000 per person per quarter, and other changes aimed at ending the use of transactions that he said allows Havana to circumvent sanctions and obtain access to hard currency.

Remittances from the United States have surged since Obama started easing restrictions on them in 2009, becoming an important part of the Cuban economy and fuelling the growth of the private sector by providing start-up capital.

He said the United States would also further restrict "non-family" travel by Americans to Cuba - though he offered no details - and cited military-owned Cuban airline Aerogaviota among the five names being added to the U.S. sanctions blacklist.

Also on Wednesday, Bolton announced that Washington was imposing sanctions on Nicaragua's Bancorp and on Laureano Ortega, a son of President Daniel Ortega.

(Reporting by Zachary Fagenson in Miami and Matt Spetalnick and Lesley Wroughton in Washington; Additional reporting by Makini Brice, David Alexander and Doina Chiacu in Washington; Sarah Marsh and Marc Frank in Havana;Philip Blenkinsop and Jan Strupczewski in Brussels; Editing by Lisa Shumaker)