By Richard Cowan WASHINGTON (Reuters) - U.S. Senate Majority Leader Mitch McConnell said on Tuesday he hoped Congress could reach by the end of the day a two-year agreement on federal spending limits that would also increase the nation's debt ceiling. 'Our hope is to make a deal before the day is over,' McConnell, a Republican, told reporters 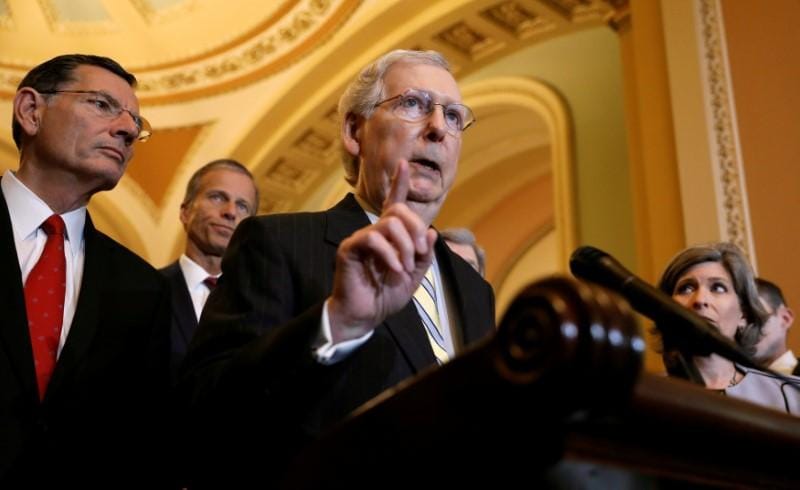 WASHINGTON (Reuters) - U.S. Senate Majority Leader Mitch McConnell said on Tuesday he hoped Congress could reach by the end of the day a two-year agreement on federal spending limits that would also increase the nation's debt ceiling.

"Our hope is to make a deal before the day is over," McConnell, a Republican, told reporters. "The agreement would be a two-year caps deal, which would allow us to go forward with some semblance at least of a regular appropriations process. It would also in all likelihood include the debt ceiling."

The U.S. Treasury later this year is expected to exhaust its statutory borrowing authority amid heavy deficit spending by the federal government. Democrats have been pushing for an increase in the debt ceiling as part of the negotiations on overall spending caps.

The four top Democrats and Republicans in the House of Representatives and Senate, along with some leading Trump administration officials, met for nearly two hours earlier on Tuesday in House Speaker Nancy Pelosi's office - a far longer meeting than had been anticipated.

After that meeting, Senate Democratic Leader Chuck Schumer told reporters that progress was made but that there were differences to be resolved.

"We have certain domestic needs that are very important to us," Schumer said.

Without a bipartisan deal on new budget caps, military spending would drop to around $576 billion in the fiscal year starting Oct. 1, a $70.8 billion reduction from this year.